Unlocking the potential of weekly player volatility in daily fantasy football gives gamers a competitive edge. A key metric on PlayerProfiler, Weekly Volatility measures a player’s week-to-week fantasy point scoring oscillation. This article will track the most volatile wide receivers and provide insight on when to deploy them in large-field GPPs. Using matchup and usage data combined with advanced stats to pinpoint the best plays yields the best ROI from volatile players. The focus will be on those highly volatile players with cheap salaries and low projected rostership who make screaming plays with tournament winning upside.

Get Those Lockett Lineups In

Enter Tyler Lockett, the most volatile fantasy football wide receiver in the league. He carries a Weekly Volatility mark of 14.4, showing extremely fantasy scoring oscillation. Lockett boasts a 50-point ceiling but has also recorded five games with fewer than 10 fantasy points this season. A true boom-or-bust archetype, Lockett looks primed for a breakout game against the Jets. And at a salary of $7,200 on DraftKings with low projected rostership, he’s a leverageable GPP asset. 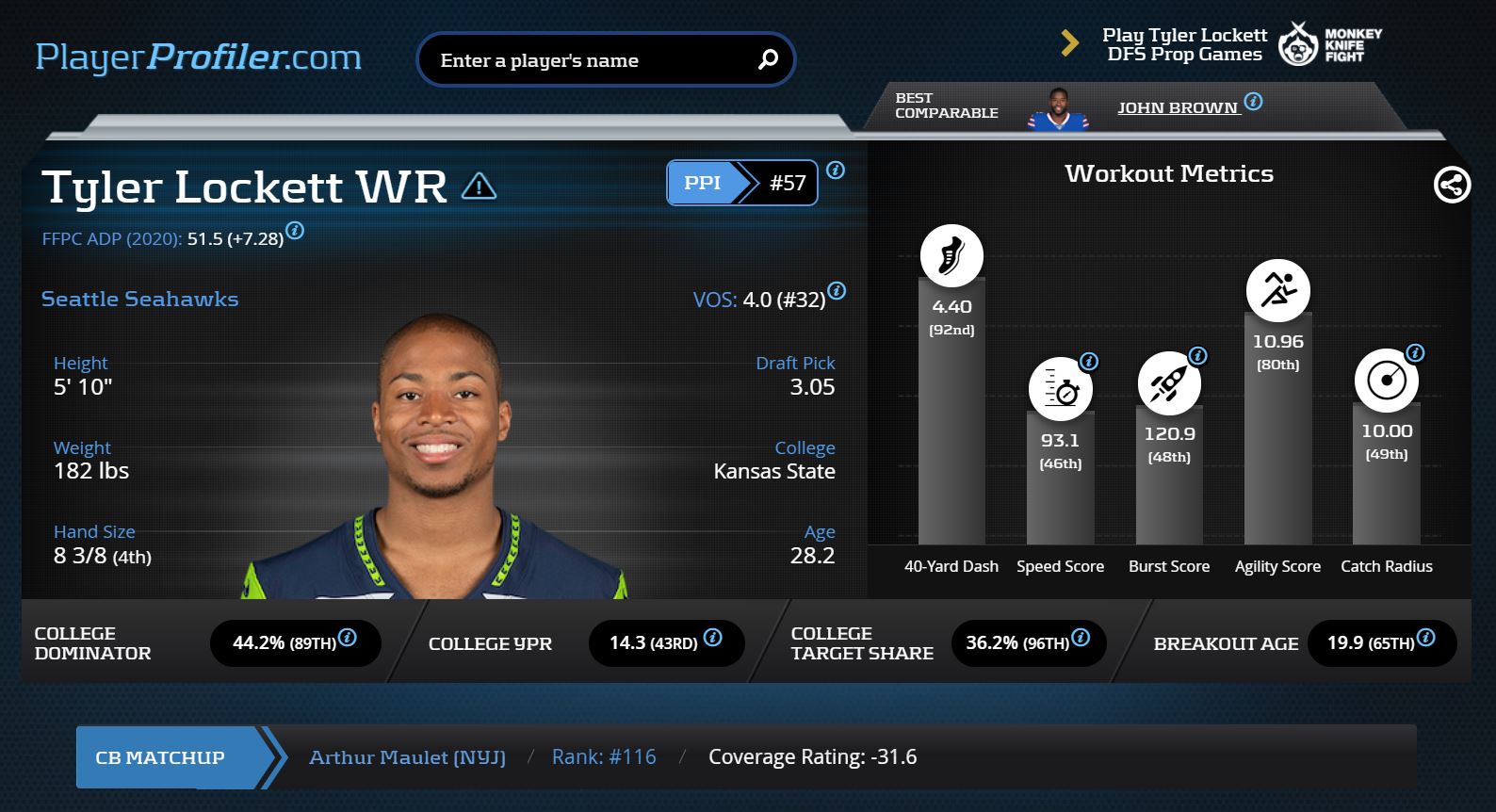 After two quiet games in row in which he failed to find the end zone, Lockett lands in a smash spot against New York. The Jets allow +3.05 fantasy points above the mean to opposing receivers, and Lockett draws a cake matchup individually. He faces primary coverage from Arthur Maulet, who comes in at No. 116 in PlayerProfiler’s cornerback rankings. In six games this season, Maulet’s only primary matchup against a fantasy WR1 came against Keenan Allen. It did not go well. Allen scored 34.5 (No. 1) fantasy points.

Despite his recent TD drought, Russell Wilson has funneled Lockett 12 (No. 11 among qualified wide receivers) Red Zone Targets and he’s caught nine of them. He’s scored eight times this season, which ranks No. 7 at the position. Lockett has received fewer than five targets twice in 12 games, and earned nine targets in two of his past three. He figures to add to his eight catches of 20-plus yards this season. The Jets have allowed 43 explosive pass plays per Sharp Football Stats, the sixth-most in the league.

Boom Week On Tap for Brown

Corey Davis ($5.7K) creeping toward his highest projected rostership of the season means it’s the perfect time to play A.J. Brown ($7.3K). Davis boomed last week for his best fantasy outing of the season, his 35.2 points topping the position. But given his 9.6 (No. 12) Weekly Volatility mark, he’s unlikely to produce a repeat performance. Further, Brown’s knack for the end zone stands out. His eight TDs this season rank No. 7, and he’s caught 8-of-11 red zone targets. Davis on the other hand, has scored four TDs and caught 5-of-5 red zone targets. That forms the basis for Brown’s 33-percent (No. 7) Dominator Rating. 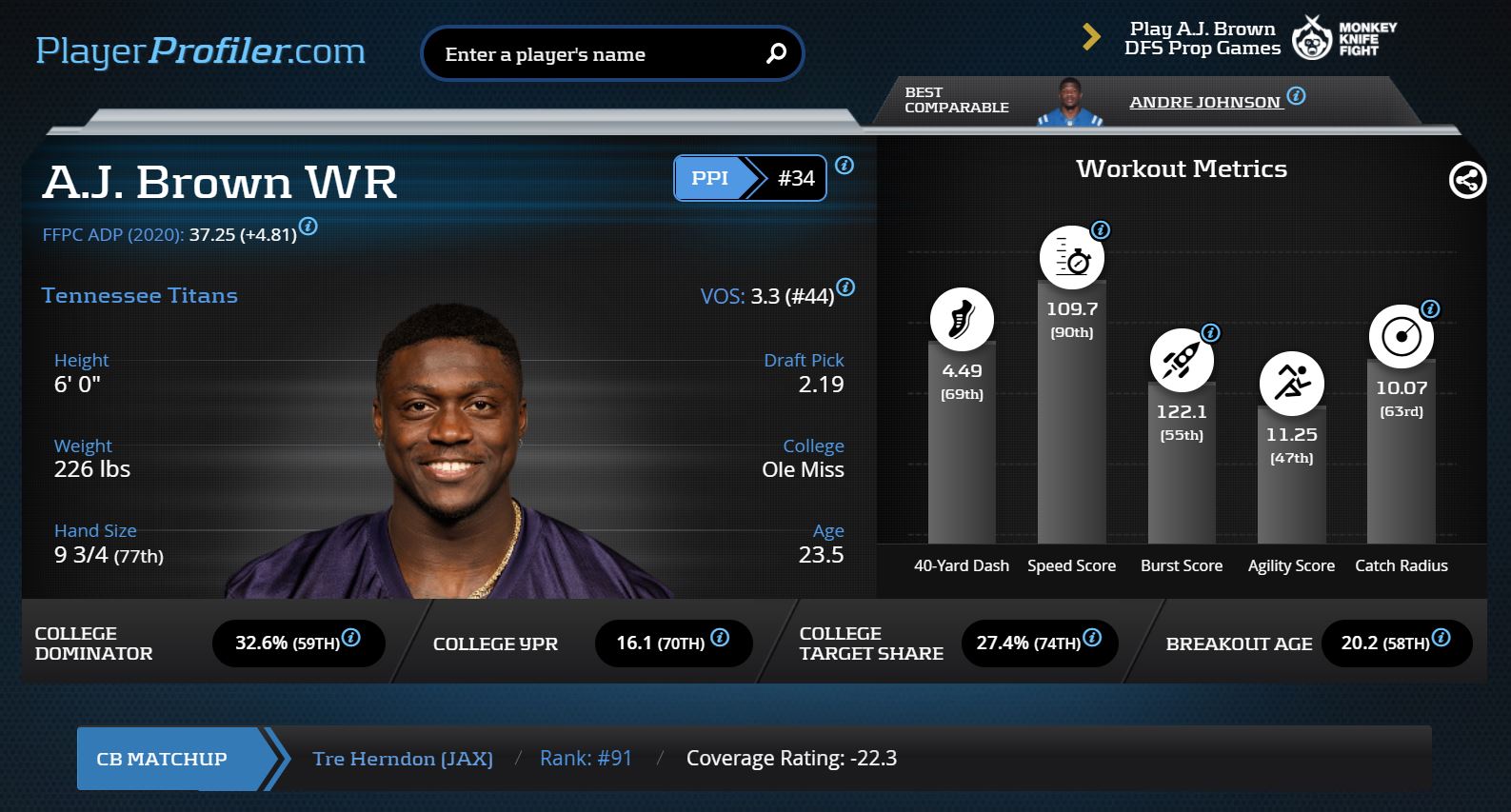 In this juicy divisional showdown with the second-highest projected total (53) on the main slate, brace for fireworks from Brown instead. Brown, whose fantasy scoring fluctuation borders on volatile, projects as a lower-rostered asset who gamers can leverage in lineups. He’s seen at least six targets, recorded at least four catches and eclipsed 60 receiving yards in three straight games.  In Week 13 against Cleveland, he ran a season-high 39 routes and saw 157 Air Yards.

The Jaguars secondary allows +3.96 fantasy points above the mean to opposing receivers. That’s the sixth-highest mark in the league, and the group faces adversity due to a myriad of injuries. Against Minnesota last week, both Justin Jefferson (27.3 fantasy points) and Adam Thielen (21.5) posted WR1 finishes.

Get Amari Cooper ($6.5K) into lineups this week. He’s being overlooked in a potential blowup spot with low projected rostership. The Andy Dalton revenge game narrative comes into play, with the quarterback facing his former team for the first time. If Dalton elevates his play against the Bengals, the Cowboys receivers benefit. And Cooper, who’s seen an increase in targets in each of his past four games, figures to be the biggest beneficiary and the lowest-rostered Cowboys receiver. 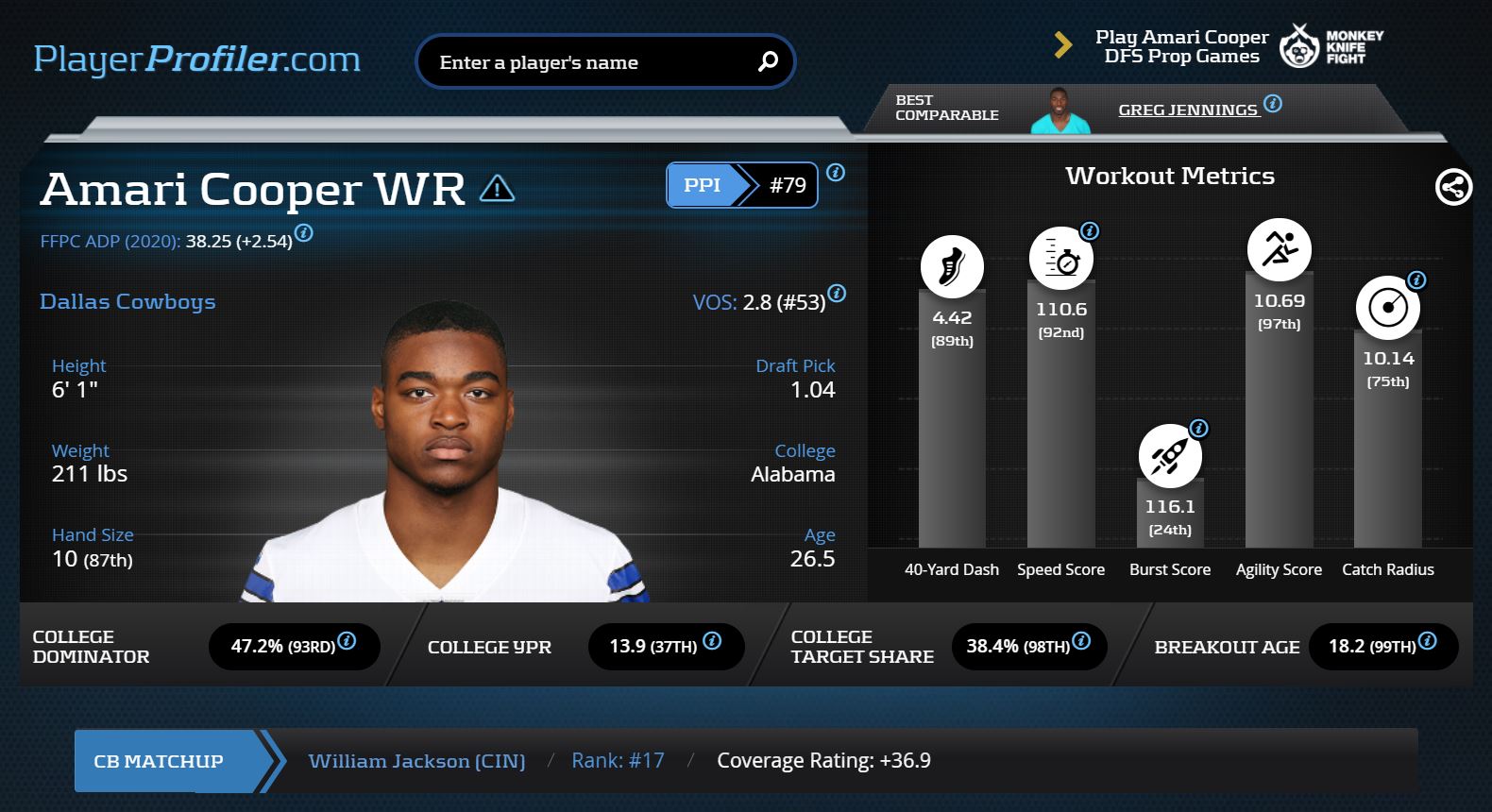 Cooper has only scored three (No. 46) touchdowns on the season despite seeing 11 (No. 15) Red Zone Targets. He’s only caught four of them, and his 78.5-percent (No. 48) Catchable Target Rate factors into that. However, Dalton has ratcheted up his pass attempts in each of his past three games, throwing three TDs against Minnesota in Week 11. During that span, Cooper saw three Red Zone Targets, so Dalton is looking his way when it counts. The matchup against Cincinnati shouldn’t be shied away from. The Bengals secondary ranks in the middle of the pack for fantasy point allowed to receivers. Cooper’s individual matchup against William Jackson and his+36.9 (No. 10) Coverage Rating will be a test, but it’s one he can pass.