The Seattle Seahawks, a team lacking in salary cap space this offseason, locked up starting wide receiver Tyler Lockett on a four-year extension worth $69 million. The initial fan reaction was disappointment and confusion. Why would the Seahawks commit a long-term contract to Lockett? He finished with a 13.6 (No. 1 among qualified wide receivers) Weekly Volatility rating, and D.K. Metcalf‘s contract expires in two seasons.

If the Seahawks do extend Metcalf in the future, will the Seahawks be able to retain Lockett on his contract? The Minnesota Vikings (Justin Jefferson and Adam Thielen) were the only other team to finish with two top-12 wide receivers in Fantasy Points per Game. In dynasty leagues, selling the 28-year-old Lockett is obvious. The real question is does he have a trade market in dynasty leagues? And what is a realistic trade package you can expect in return for him?

Tyler Lockett‘s four-year extension won’t kick in until 2022. This will keep him under contract for a total of five seasons. 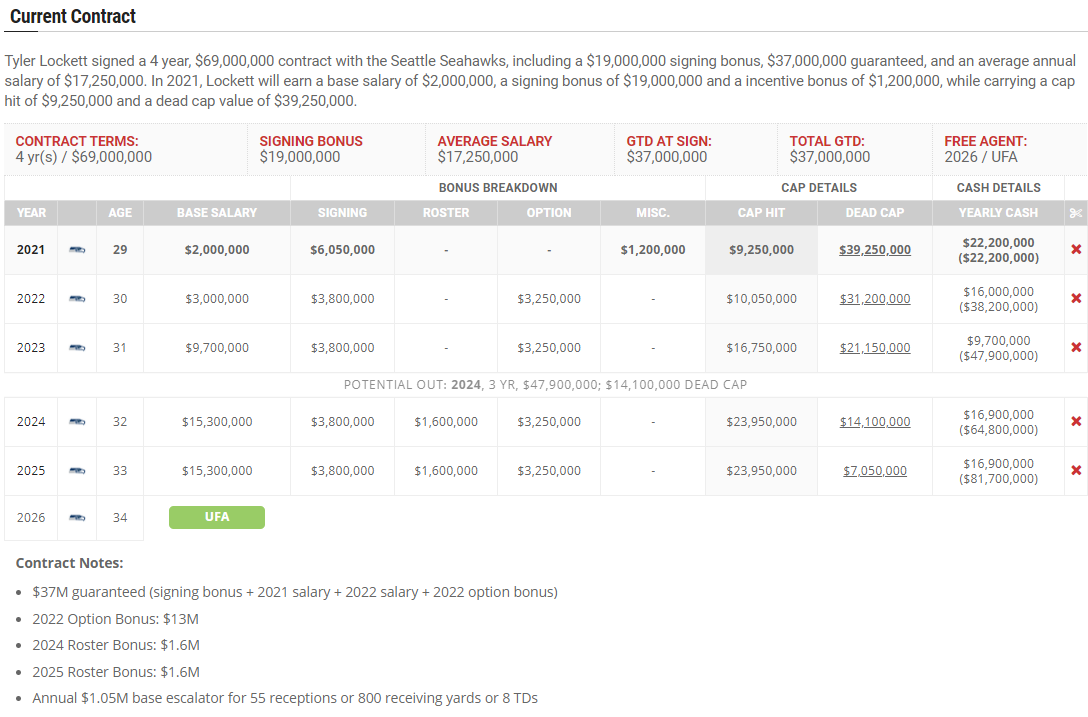 It’s important to understand that the primary reason for the Seahawks to extend Lockett is short-term salary-cap relief in 2021 and 2022. Extending him allowed the Seahawks to convert his 2021 base salary into a signing bonus to spread across five seasons. This provides the cap space to sign rookies and fill out their 90-man offseason roster. 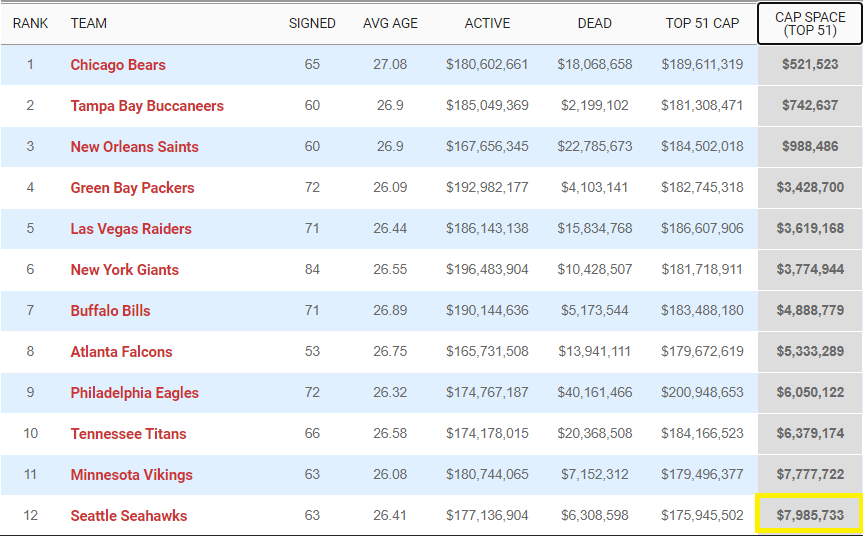 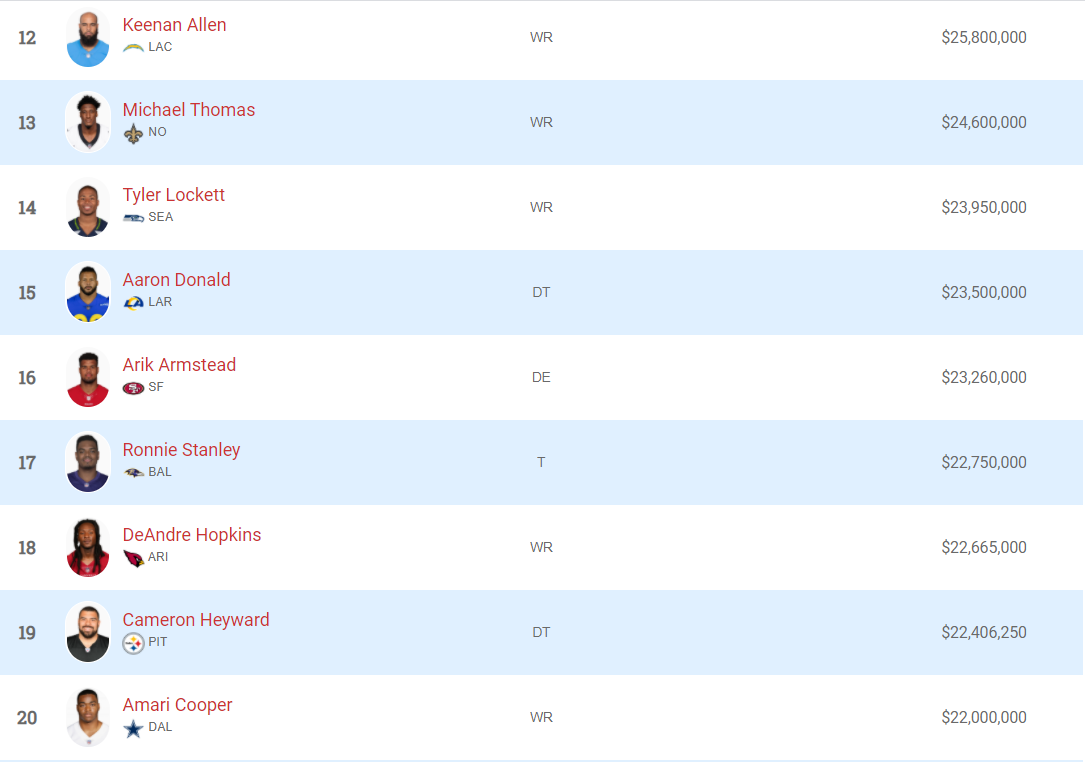 If that $23.95 million cap hit in 2024 seems ridiculously high for a wide receiver, it’s because it is. Lockett’s cap hit will be higher than any receiver that has signed a contract in the past twelve months, including DeAndre Hopkins ($22.67 million) and Kenny Golladay ($21.4 million). It ranks third in wide receiver cap hit in 2024 behind Keenan Allen ($25.8 million) and Michael Thomas ($24.6 million). Among all NFL players, Lockett will count more on the 2024 salary cap than Aaron Donald, the DPOY in three of the last four seasons, will for the division-rival Los Angeles Rams. Expect the Seahawks to move on from him after 2023 before he enters his age-32 season. 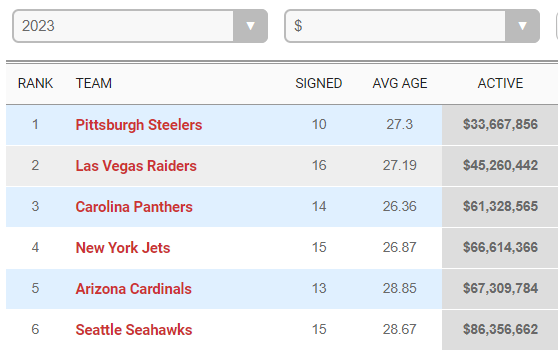 Seahawks fans and D.K. Metcalf dynasty managers are left to conjecture: “With Lockett guaranteed to remain in Seattle through 2023, what does this mean for Metcalf when he enters free agency after the 2022 season?” The Seahawks only have $86.37 million in active cap allocated to players, the sixth-lowest amount in the NFL. That information is mellifluous to all parties; unless the Seahawks opt against keeping him, salary-cap space won’t be an issue.

The Center of the Opportunity-Productivity-Efficiency Venn Diagram

Can Lockett maintain his efficiency with another high-volume passing game role in 2021? His 75.8-percent (No. 9) Catch Rate, 93.5-percent (No. 9) True Catch Rate and low 3.8-percent (No. 60) Drop Rate didn’t leave fantasy points on the field. Capitalize on his 2020 season that saw high usage, WR1 productivity, and efficiency unusual for players that see the volume that he received.

Playerprofiler’s Trade Finder reveals that Lockett’s trade value is sere. Because of this, a 2021 first-round rookie pick is unlikely available in trade talks when shopping him in leagues. Instead, target an early second-round pick and a veteran wide receiver around Lockett’s age, such as Brandin Cooks or Robby Anderson. 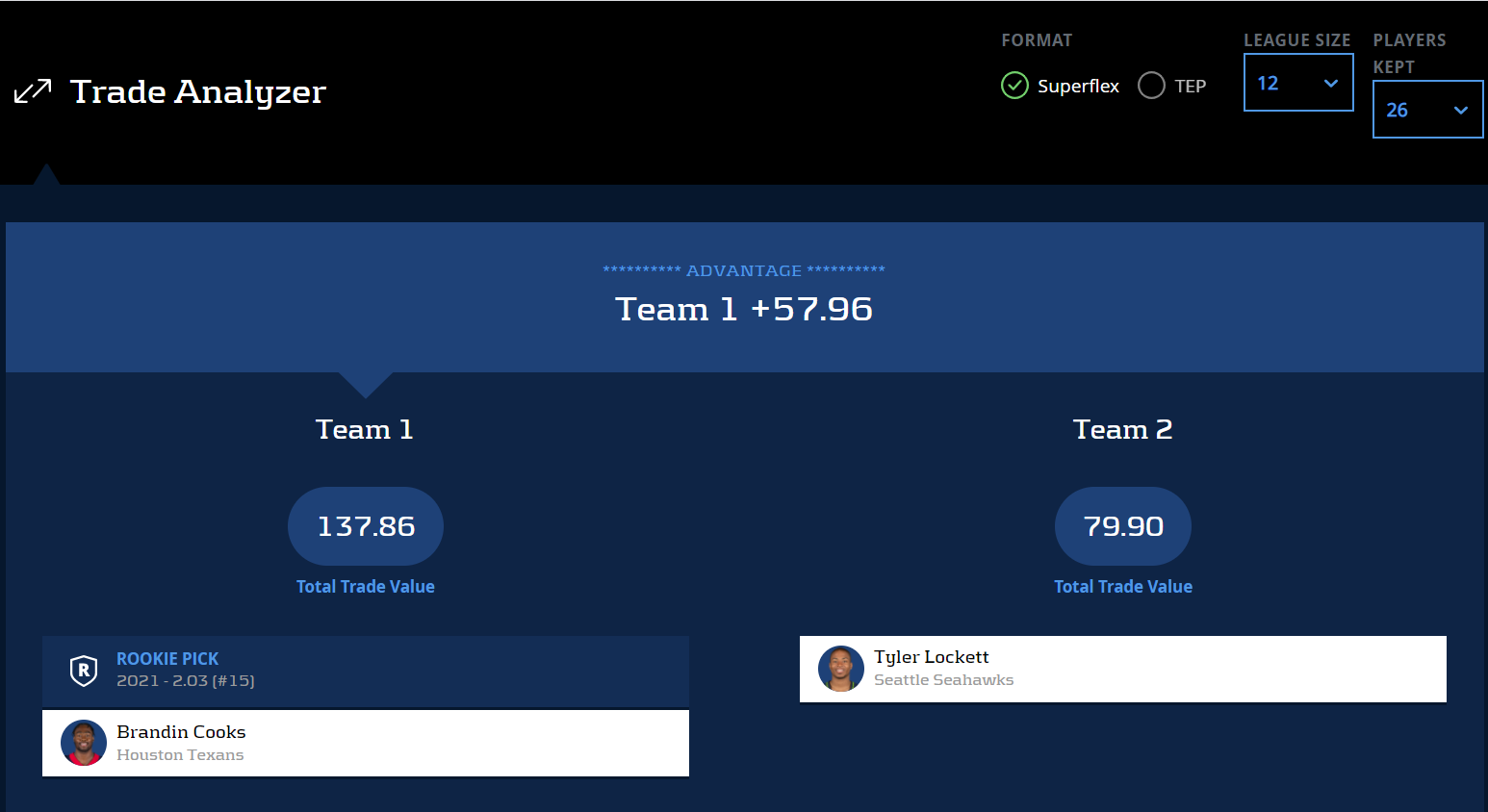 Cooks, in particular, is an interesting target to acquire for teams trading away Lockett. He’s a year younger and cheaper to acquire in dynasty leagues according to the Trade Finder. 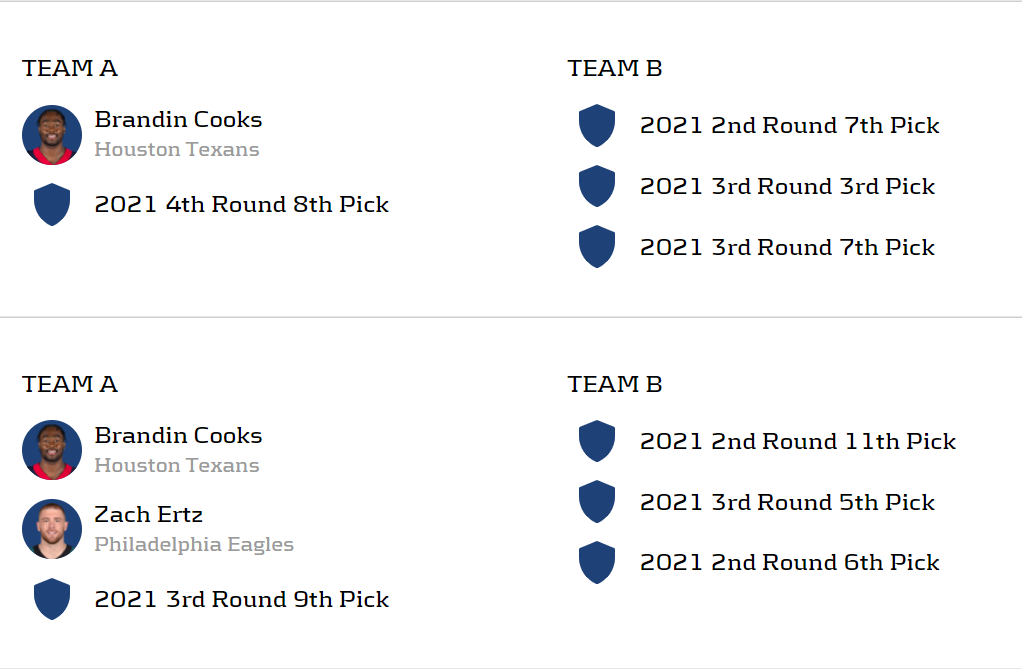 Brandin Cooks Trade Finder: Why is he so cheap!?

Cooks has Lockett in his Best Comparable Player comps in the Data Analysis Tool. And he recorded 2020 efficiency metrics comparable to Lockett. He finished with 1.2 fewer Fantasy Points per Game in 2020. But he finds himself on a bad team expected to play from behind in going into 2021 with zero target competition.

The early second-round pick in Superflex leagues has the potential to net a wide receiver that slides in drafts, while teams take all five of the quarterbacks, the top-3 running backs, Ja’Marr Chase, Devonta Smith, and Kyle Pitts in the first round. It’s not out of the realm of possibilities that Rashod Bateman, Rondale Moore, or Terrace Marshall slides to the early second-round pick acquired in trading away Lockett.

Trade him for the veteran wide receivers and the draft pick. In 2021, dynasty managers will receive similar wide receiver production from Cooks or Anderson that they would receive from Lockett. And at the same time, they’d acquire a young, talented player to keep the dynasty going into the future.