Take a deep breath and stay patient. That was written regarding Jonathan Taylor in the Week 9 edition of the Dynasty Market Movers. Over the last three weeks, Taylor has amassed 414 total yards and three touchdowns to finish as RB11, RB5, and RB2 in fantasy football. With a Snap Share of 51.1-percent during this time, he’s seen at least 20 carries in two of his last three games.

On the season, Taylor sits second in rushing yards for rookies behind James Robinson, but his receiving metrics have been equally impressive, if not more. He leads all qualified RBs with 9.2 Yards Per Reception and a 93.9-percent Catch Rate. He has caught 31 out of 33 targets. Taylor is No. 12 at the position and fourth among rookie RBs with 286 receiving yards through Week 14. He gained 9.97 Lifetime Value points to move up four spots to RB4 on the dynasty rankings.

Despite being limited to 32.7-percent of the Ravens snaps over the past two games, Gus Edwards has been solid. He has produced back-to-back double digit fantasy games in Baltimore’s run-centric offense and is slated to take on the Jaguars in Week 15. Edwards had seven carries and one catch for 53 total yards and a pair of scores in a thrilling game against the Browns. What is also of note is that Mark Ingram played just one snap on Monday night. Through 13 games, Edwards has an efficient 4.7 (No. 9) True Yards Per Carry for 537 (No. 27) rushing yards and six (No. 20) touchdowns. A free agent in 2021, Edwards makes for an interesting RB depth option for dynasty teams. The 25-year-old moves up 15 spots to RB56.

Needless to say, the move to Buffalo has been good for Stefon Diggs and his dynasty stock continues to trend upward. He gained another 42.12 Lifetime Value points to move up two spots to WR7 on the dynasty rankings. Heading into Week 15, Diggs has 136 (No. 2) targets, 100 (No. 1) receptions and 1,167 (No. 2) receiving yards. His 29.4-percent (No. 2) Target Share ranks behind only Davante Adams.

On a weekly basis, Diggs has finished as WR20 or better in eight of 13 games. He averages 19.0 Fantasy Points per Game, which currently ranks No. 3 among qualified wide receivers. It’s a fun time to roster him in dynasty.

It was a pedestrian start to the year for third-round rookie RB/WR Lynn Bowden. He was traded away from the Raiders and used sparingly while acclimatizing to his new team in South Florida. Bowden saw one target when active from Weeks 2-6. However, his dynasty outlook has changed for the positive more recently. He played 46.3-percent of Miami’s snaps in Week 13, seeing a career-high 76.7-percent Snap Share in Week 14 due to injuries to Jakeem Grant and DeVante Parker.

lynn bowden was destined to be an nfl wide receiver, not a gadget player.

Working as the primary slot receiver, he made good on the increased opportunity against the Chiefs, catching seven of his team-leading nine targets for 82 yards. Over the past two weeks, Bowden has climbed from WR100 to WR64 on the dynasty rankings.

Following a Week 10 appearance as a faller on the Dynasty Market Movers report, Irv Smith‘s  dynasty stock slid as low as TE17. Returning from a back injury in Week 14, Smith showed the Vikings what he could do without veteran Kyle Rudolph on the field. Despite being limited to 42.9-percent of Minnesota’s snaps, Smith caught all four of his targets on way to posting 63 yards and a touchdown – good for 16.3 fantasy points and a TE3 finish on the week. He moves up three spots to a mark of TE14. Clear of the Week 15 injury report, Smith looks to build on this performance with Rudolph once again ruled out.

Todd Gurley has 645 (No. 20) rushing yards and nine (No. 6) touchdowns in 2020. Unfortunately, he only has 19 (No. 39) receptions and 28 (No. 36) targets. Recently landing on the injury report with a knee injury and forced to sit out in Week 12, Gurley hasn’t looked close to 100-percent. This is evidenced by his falling Snap Share and single-digit carry totals in each of his last three games. 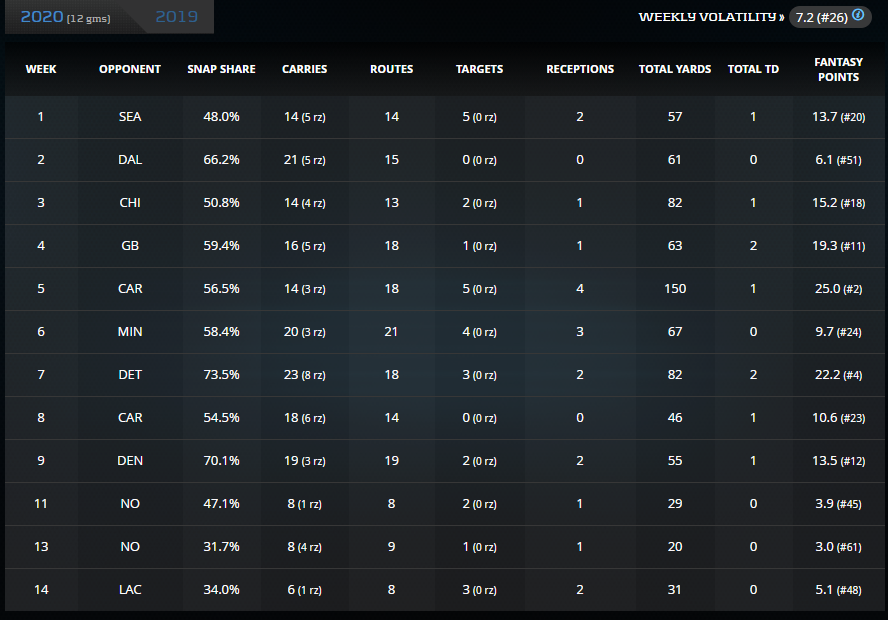 Gurley’s phone isn’t the only thing falling into the toilet this week. His dynasty stock has also dropped 17.58 Lifetime Value points and five spots, moving outside the Top 30 to RB34 on the dynasty rankings. Here’s to hoping that he can clean it up and get back to scoring touchdowns.

In Week 14 against the Cowboys, Giovani Bernard fumbled on the opening drive for the first time in 829 consecutive attempts. He was shown the bench and played just 23.5-percent of snaps. Bit excessive? Perhaps. Has he been productive lately? No. In the past five contests, Bernard has maxed out at 55 total yards and has two games under 30 total yards. He has no touchdowns. Like many members of the Bengals offense, his production has drastically fallen off without Joe Burrow under center. The eight-year veteran drops 21 spots to fall to RB72 in the dynasty rankings.

Steelers Coach Mike Tomlin is not saying that Chase Claypool has hit the rookie wall, he’s just saying that there’s a potential for it. Regardless, Claypool has seen a recent dip in playing time. Claypool played around 61-percent of the snaps from Weeks 10-12, playing 41.8-percent in Week 13. If not for a benching to Diontae Johnson in Week 14, this trend may have continued versus the Bills last Sunday night.

Mike Tomlin on Chase Claypool’s snap decrease, says he hasn’t hit the rookie wall yet, but says he could – that’s why they’ve decreased the snaps.

Coincidentally, the second-round rookie has not eclipsed 60 receiving yards since Week 9 and has no touchdowns in the last three games. Claypool’s downward trend yields a three-spot slip to WR19 in the dynasty rankings. If this continues, look for opportunities to acquire the talented rookie at value early in the offseason.

Battling a hamstring injury since Week 5, Sammy Watkins returned to the Chiefs lineup in Week 12. He’s received a significant Snap Share and runs lots of routes, but is a distant passing game option behind Travis Kelce, Tyreek Hill and even Mecole Hardman at times. Since Week 12, Watkins has 10 catches for 125 receiving yards and no touchdowns. If you need seven fantasy points, Sammy is your man. The picture of consistency, he has 7.8 (No. 54), 7.5 (No. 66) and 7.2 (No. 64) PPR points over the last three games. The 27-year old Watkins drops seven spots to WR79 and has taken a backseat in dynasty leagues.

For the second time this season, New England Patriots quarterback Cam Newton was benched. This time it came after falling behind 24-3 to the Los Angeles Rams. He completed nine of 16 passes (56.2-percent) for 119 yards, threw a pick-six and was sacked four times. Newton’s wildly inconsistent performances in 2020 have to be frustrating for fantasy managers. It is especially maddening of late since he has sandwiched QB29 performances (Week 12 and Week 14) between QB13 (Week 11) and QB8 (Week 13) finishes.