Using PlayerProfiler’s advanced stats, metrics, and analytics, here’s an early list of players to target in redraft fantasy football leagues in 2021. This list will be updated throughout the offseason as news develops. The goal of this exercise is to identify what we look for in players for fantasy football purposes. In short, we want to target high-floor, high-ceiling players, preferably in a narrow fantasy football environment.

Below are key statistics to know while following along:

Route Participation – How frequently a pass-catcher runs a route on his team’s pass plays.

Target Rate – Targets Per Routes Run. How frequently a pass-catcher commands a target in context with his Route Participation mark.

Weighted Opportunities – Determines which backs receive the most meaningful touches.

Curtis Samuel is a free agent and vacates 97 (No. 37 among qualified wide receivers) targets. The Panthers, with a returning Joe Brady, targeted receivers at the fourth-highest clip (69.4-percent) this past season, as well.

That 69.4-percent clip is important because it emphasizes how narrow Carolina’s pass targets are. For context, the Panthers basically don’t involve the tight end in the pass game, targeting the position at the second-lowest clip (7.8-percent). The Panthers’ defense ranked 11th-worst in Football Outsiders’ Weighted DVOA, which emphasizes the second half of the season. Even if they add defensive pieces this offseason, they’re still a ways away from not being the reason the offense is in catch-up mode.

One thing that is certain: The Panthers want to upgrade at quarterback. An upgrade at quarterback may prompt them to attempt more than 36.7 (No. 21) Team Pass Plays per Game. But with Samuel set to walk in free agency, Moore and Anderson are primed to be what we target in fantasy football: high-floor, high-ceiling assets. High floor because of the narrow pass distribution and boost in volume. High ceiling because of the potential of better, efficient quarterback play. Moore and Anderson each scored double-digit points in the same game six times in 2020. We anticipate that to increase in 2021. They’re both going in the seventh round as WR30 and WR34, respectively, according to Fantasy Football Calculator data. Let’s put our masks on first, because we’re committing highway robbery.

Calvin Ridley‘s 25.1-percent (No. 13) Target Share and Julio Jones‘ 20-percent (No. 37) accounted for 45.1-percent of Atlanta’s passing offense this past season. Specifically, the duo combined for 17.1 Targets per Game. For context, that was tied for second-highest among receiver duos with Stefon Diggs and Cole Beasley, and behind only Diontae Johnson and JuJu Smith-Schuster. Tyreek Hill and Travis Kelce, meanwhile, led pass-catcher duos with 18.6 Targets per Game. While tied for second in Targets per Game, Ridley and Jones played on a Falcons team averaging 41.8 (No. 3) Team Pass Plays per Game. With context, the duo’s 17.1 Targets per Game represented nearly 50-percent of the team’s pass plays. Talk about a narrow pass tree. Ridley and Jones each scored at least 15.8 fantasy points in four of a possible eight games.

Ridley’s 41.4-percent (No. 3) Air Yards Share and Jones’ 24.5-percent (No. 47) combined for a whopping 65.9-percent of the Falcons pass offense. And Jones missed seven games. When Matt Ryan looks deep, he’s looking for Ridley or Jones. Even if Atlanta passes less under new play-caller Arthur Smith, Ridley and Jones will dominate the targets. Ridley is being picked in the second round as WR6, while Jones is going at the end of the third round as WR12. Jones totaled 2.7 (No. 3) Yards per Route Run last season, so we believe there’s plenty left in the tank. Stack the Falcons receivers in consecutive rounds.

When Joe Burrow and Tee Higgins were healthy from Weeks 2-11, Higgins was WR24 with a 14.5 Fantasy Points per Game average, while Tyler Boyd was WR10 with a 17.2 Fantasy Points per Game average. In those 10 games, Burrow attempted no less than 30 passes and eclipsed 35 attempts eight times. A porous defense led the Bengals to attempt 39.3 (No. 11) Team Pass Plays per Game. Said defense ranked sixth-worst in Weighted DVOA as well (so keep the pass volume coming in 2021). Burrow, meanwhile, totaled 8.2 (No. 11) Air Yards per Attempt. The then-rookie was not afraid to go deep. That’s good news for Higgins and Boyd in 2021. The duo each scored double-digit points in six of nine games with Burrow.

In nine games with Burrow, Higgins totaled 71 Targets (7.8 Targets per Game), parlaying the opportunity into 43 Receptions, 629 Receiving Yards, and four top-15 weekly finishes. He also totaled 938 Air Yards. Boyd, in 10 games with Burrow, totaled 87 Targets (8.7 Targets per Game). He produced 69 Receptions, 710 Receiving Yards, 737 Air Yards, and six top-20 weekly finishes. A.J. Green vacates 104 (No. 32) Targets after the Bengals tied with the Panthers in targeting their receivers at a 69.4-percent (No. 4) clip. Already in a narrow pass distribution tree, Higgins and Boyd are looking at an increase in targets in an already high-volume pass attack. Backed by a weak defense, we’re looking at another high-floor, high-ceiling receiver duo if Burrow makes strides in Year 2. Boyd is going in the sixth round as WR26, while Higgins is going in the seventh as WR33.

Cam Akers totaled 16-plus touches in each of his final four games in 2020. For context, he totaled double-digit carries twice from Weeks 1-12. That, plus 30 touches in the Rams’ Wild Card game and another 19 during the Divisional Round, is what leads us to believe he is primed for a breakout season in 2021. The Rams averaged 29.6 (No. 7) Team Run Plays per Game last year, after averaging 25.1 (No. 18) Team Run Plays per Game in 2019.

Said his production and development last year was a credit not only to Akers, but also the amount of time assistant head coach/RBs coach Thomas Brown invested in working with him.

Marquise Brown totaled 6.2 Targets per Game on a Ravens team averaging 27.4 (No. 32) Team Pass Plays per Game. While that’s nothing that’ll get the group chat talking, he also totaled a 25.2-percent (No. 12) Target Share and a 37.2-percent (No. 8) Air Yards Share. He commanded 25 (No. 7) Deep Targets as well. A bet on Brown is a bet that the Ravens will actually pass more next season. With a ninth-round price tag, his upside is worth the risk.

If the Ravens disappoint fantasy gamers again, we’re still acquiring a player that finished with a Flex-worthy 11.4 (No. 44) Fantasy Points per Game. Brown finished the season with six touchdowns in his final six games. There’s going to be a market inefficiency on the Baltimore passing attack come draft season, just like there was on the Tennessee’s this past season. Brown is a no-risk, all-upside target being drafted in the ninth round as WR42.

Action: We like Brown over these receivers being drafted earlier: Jamison Crowder, ninth round, WR40; Jerry Jeudy, eighth round, WR38.

When Dak Prescott was healthy from Weeks 1-5, CeeDee Lamb averaged 17.1 Fantasy Points per Game, while Amari Cooper averaged 17.8 FFPG. That was good for WR8 and WR11, respectively, in that timeframe. While Prescott’s pace was unstainable if he had stayed healthy, the Cowboys still averaged averaged 42.7 (No. 1) Team Pass Plays per Game on the season. Lamb commanded at least six targets in each contest with Prescott, posting three top-20 weekly finishes with at least 17.0 fantasy points.

Most among Rookie Wide Receivers ? pic.twitter.com/7oWjVPCmmt

From Weeks 6-17, Lamb posted one top-20 finish. In fact, he eclipsed 13.0 fantasy points only five times and failed to produce double-digit points five times as well. Prescott’s injury derailed an all-time rookie season. Lamb ended up averaging 13.1 (No. 35) Fantasy Points per Game. That’s why we’re currently able to snag him in the fifth round of drafts as WR20. Take the discount and watch him break out.

Action: We like Lamb over these receivers being drafted earlier: Cooper Kupp, fifth round, WR19; Kenny Golladay, fourth round, WR19.

In four games from Weeks 13-17, after Will Fuller was suspended, Brandin Cooks commanded 41 targets. He parlayed the production into 29 Receptions, 424 Receiving Yards, 582 Air Yards and three Touchdowns on a Texans team averaging 37.2 (No. 18) Team Pass Plays per Game. Fuller is a free agent, while Cooks becomes the de facto No. 1 receiver for, as of this writing, Deshaun Watson. With Randall Cobb and Keke Coutee working underneath, there’s no one to challenge Cooks for Deep Targets – Watson’s bread and butter. Look for him to expand on his 31.3-percent (No. 27) Air Yards Share and 22 (No. 12) Deep Targets. He is going in the seventh round as WR35 thus far, and that screams league-winner.

Action: We like Cooks over these receivers being drafted earlier: Deebo Samuel, seventh round, WR32; D.J. Chark, sixth round, WR27. 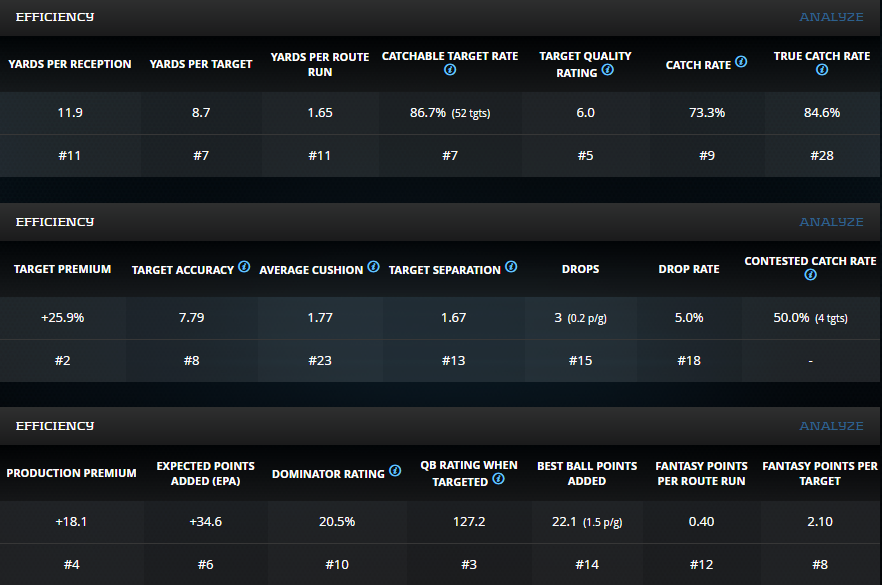