Let me be one of the first to welcome the readers of this fine page to Super Bowl Sunday! It’s been a long, winding, five-month journey, but we have arrived at the fateful conclusion to the 2021 NFL season. On one side we have the Cincinnati Bengals, a feisty team led by their resilient quarterback Joe Burrow; on the other side of the field we have the Los Angeles Rams with respected veteran quarterback Matthew Stafford leading a team with incredibly talented star players. Let’s start by observing the Los Angeles Rams’ offensive weapons, starting with the aforementioned quarterback!

Matthew Stafford is one tough competitor.

Watch that video above to see one of the gutsiest plays in all of football, or perhaps all of sports. Matthew Stafford threw the game-tying touchdown with a separated shoulder in his non-throwing arm, in a true feat of strength. Unfortunately, the rest of his time in Detroit was not as thrilling. Now in Los Angeles, he is surrounded by easily his best coaching staff and teammates. And it’s reflected in the metrics. His Touchdown Rate ranks No. 2 among quarterbacks with ten or more starts. And his 63.5 (No. 4) Total QBR puts him ahead of Patrick Mahomes. He also gets the benefit of throwing to outstanding pass catchers.

Similar to his quarterback, Odell Beckham has been on a long, dark journey. Traded from the Giants to the Browns, then this year outright released by the Browns, Beckham decided to sign with the Rams, and the fit has been extraordinary.

Something always seemed slightly off in Cleveland, but now he is flourishing before our eyes. His 10.63 (97th-percentile) Agility Score and 10.30 (95th-percentile) Catch Radius have flashed on the field. And it helps that Stafford may be the best quarterback he’s ever played with. With Cooper Kupp drawing heavy attention, expect OBJ to make a play when called upon. Speaking of Kupp… 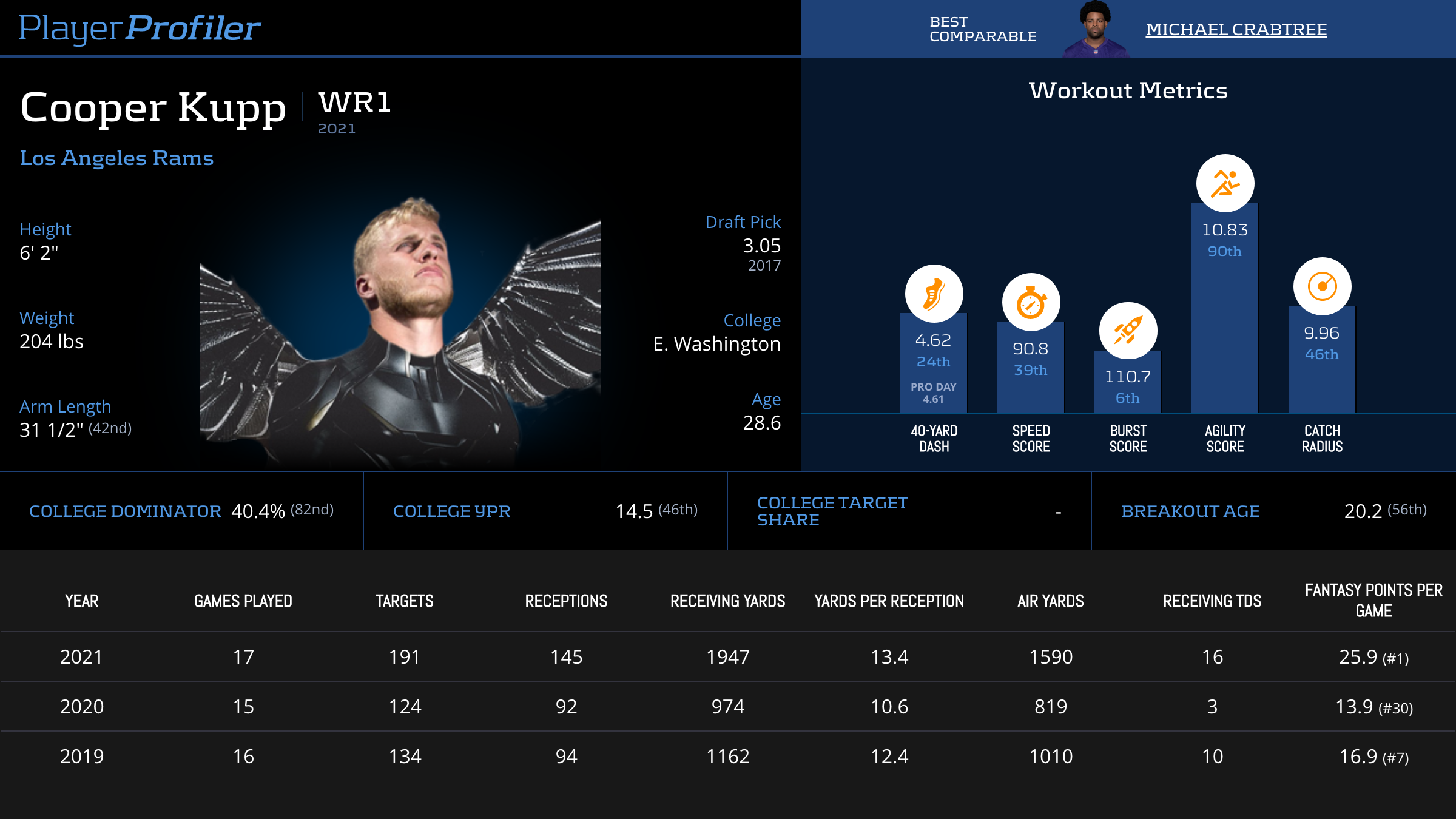 Kupp finished his historical regular season with more receptions, receiving yards, and touchdowns than anyone else in the league. In fact, he caught four more touchdowns than the entire Jacksonville Jaguars team did this year! He has solidified himself as a top ten wide receiver in the NFL. And this season is cementing his legacy as a future hall of famer. In fact, Kupp currently leads all receivers in receptions and receiving yards in the playoffs. When Stafford finds a receiver he loves, he gets them the ball as much as he possibly can.

Cam Akers, fresh off the miracle return from his torn Achilles, has rushed for the third-most yards in the playoffs. He and Sony Michel should continue to split the work Sunday. We could also see the return of Darrell Henderson. But it would likely be a supplemental role behind Michel and Akers. Also, starting tight end Tyler Higbee was injured in the first quarter against the 49ers and is questionable to play. Kendall Blanton is the name to know; he is the backup to Higbee, and he is no stranger to impact plays this postseason. He’s racked up seven catches on seven targets, 75 receiving yards, and a touchdown his last two games.

We know he oozes moxie wherever he goes. But can Joe Burrow launch himself into the conversation of being a top five quarterback with a win on Sunday? I mentioned in a previous matchup article the concerns with his offensive line after they gave up nine sacks against the Titans. And the offensive line certainly recovered, giving up only one sack!

Joe Burrow and Matthew Stafford were two of the most efficient QBs this season.

This Sunday they face off in the #SuperBowl

The game will come down to how the offensive line can handle the pressure against Aaron Donald and Von Miller. Burrow only managed a 47.1-percent (No. 14) Pressured Completion Percentage. And for the Bengals to win, he will need to make big throws under pressure. On the other side of the coin, he ranks No. 1 in Clean Pocket Completion Percentage. He is also No. 1 with 8.8 Yards per Pass Attempt, But it helps if you’ve got talented teammates.

Teed Up for the Chase

The selection of Ja’Marr Chase was one of the more debated topics in the summer, where there were two parties. There were people who wanted the Bengals to draft Penei Sewell at offensive tackle to protect Joe Burrow. Others wanted Chase because he is so good that he can erase any problems the offense might run into. Well, the Bengals made the right pick! Chase has run through his first season in the NFL leaving a pile of defensive backs in his wake. He finished the year with an 18.9 (No. 2) Yards per Reception average. His teammate, Tee Higgins, has improved his game, and the duo share fascinating statistics together. This season, no offense had two top pass catchers (tight end or wide receiver) with more receiving yards combined than Chase and Higgins. Not only that, but no duo has more 20+ yard receptions. 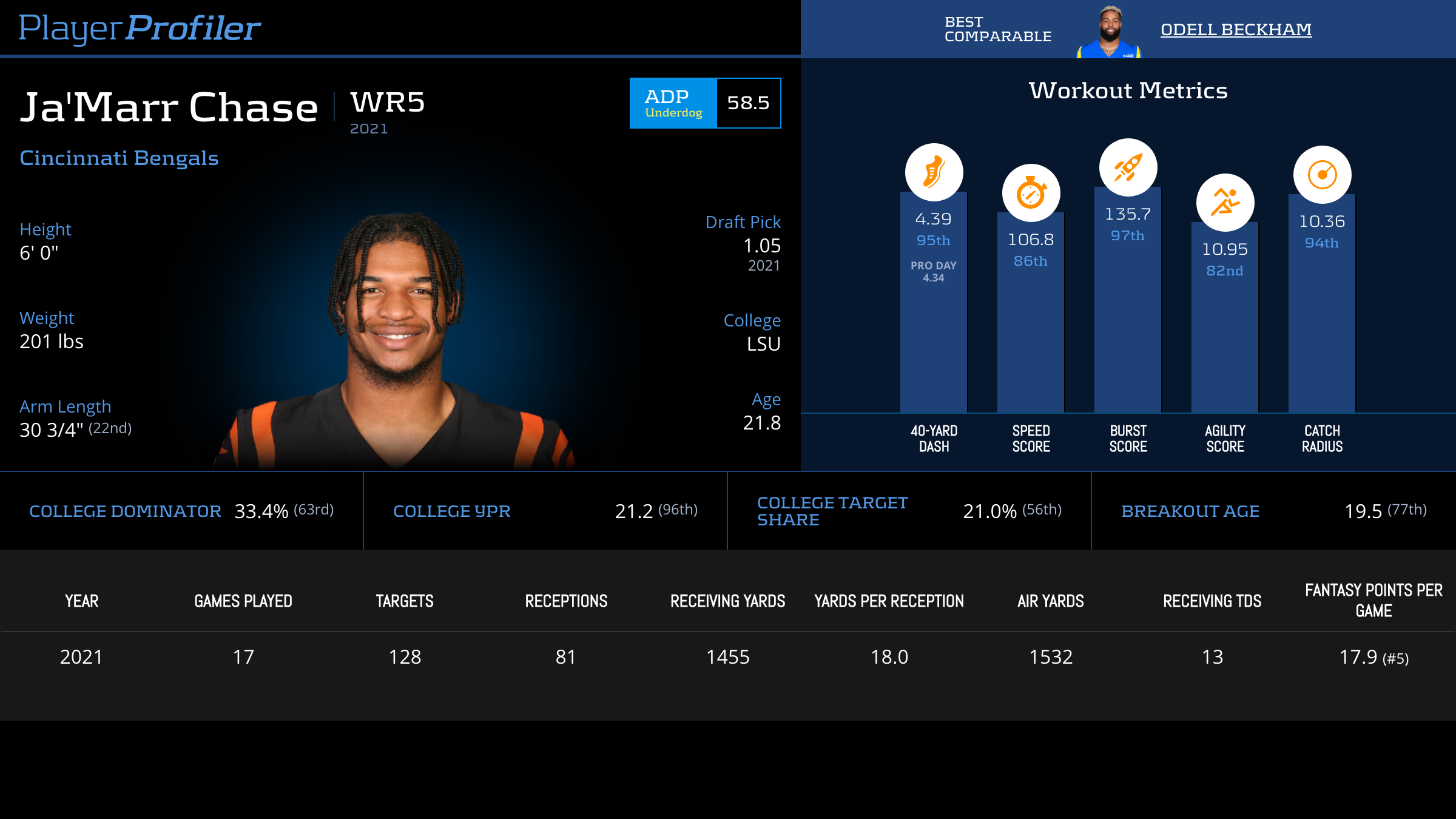 These guys are the cream of the crop, and Cincinnati will go out of its way to make sure they are involved in the game plan. Now, one of these receivers will be matched up with all-pro corner Jalen Ramsey, and that will be the other important matchup to watch in this game. Can Chase or Higgins make a play on Ramsey? Or can the receiver that has a favorable matchup be able to make a play when they need to? And Tyler Boyd will get quick passes thrown his way to help fend off the ferocious pass rush of the Rams. He could thrive if the Rams try to sell out to stop Chase and Higgins.

Mixing it Up with Mixon

I keep going back to how so much in the games comes down to the Bengals offensive line and how they can handle the Rams pass rush. One of the best ways to slow down that rush is by running the ball and throwing short, precise passes to your running back. 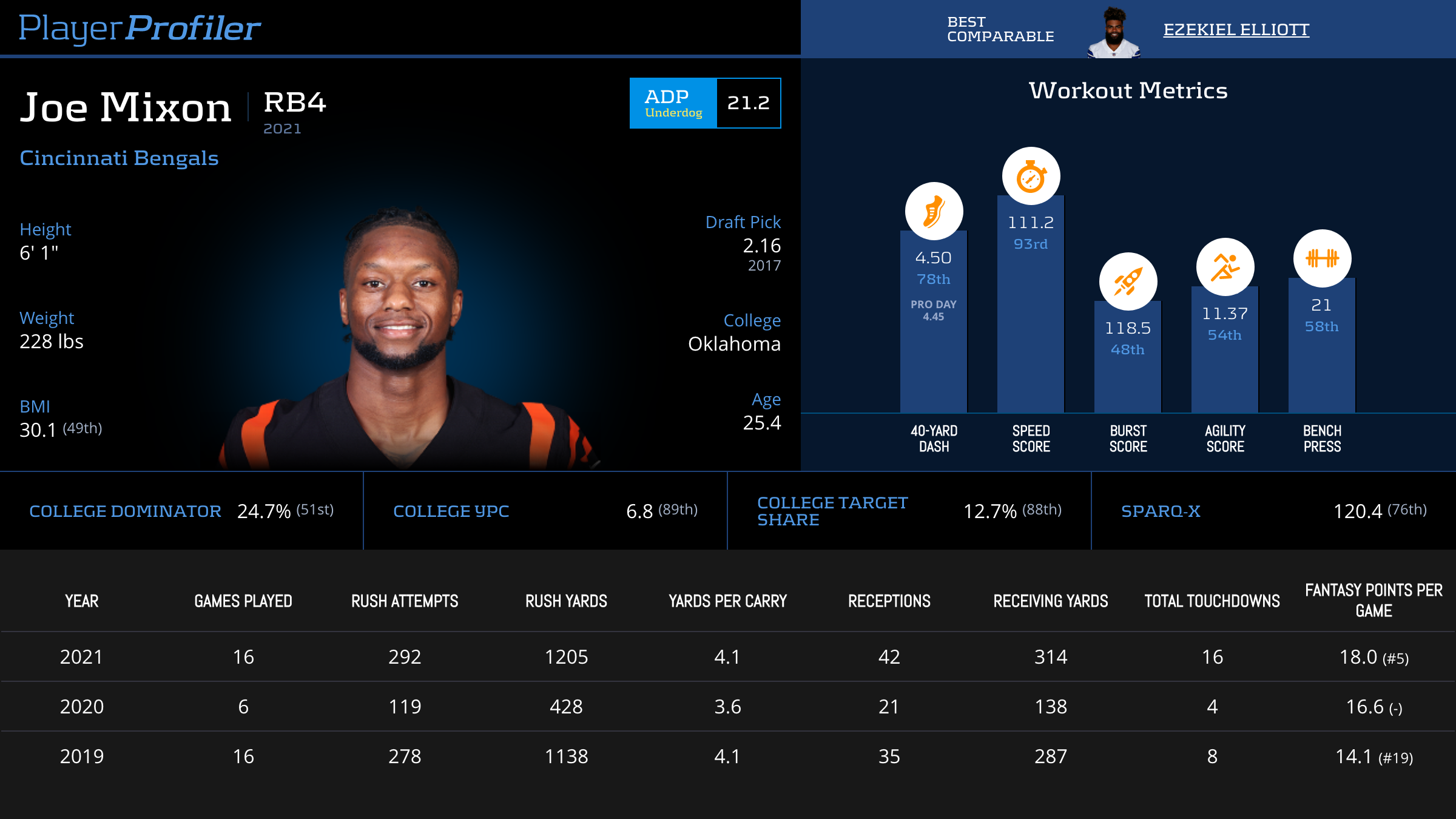 Not only is Joe Mixon an exceptional running back that has run for more yards than any other backs in the playoffs, but he is a phenomenal pass catcher, and that talent goes back to his college days, where he came out of college with a 12.7-percent (89th-percentile) College Target Share. Let’s also not forget that the Bengals love to use Samaje Perine, who had an incredible touchdown on a screen pass against the Chiefs two weeks ago.

This is the first Super Bowl since the merger where the game does not have a No. 1, 2, or 3 seed from the playoffs; this is a matchup between two No. 4 seeds. Oh, and to make it a little more exciting, both teams overcame double-digit deficits in the conference championship games to make it to the Super Bowl. The last time that happened was in 1998.

The young, fresh faces on the Bengals invite excitement. And that enthusiasm gets even more amped up when considering the past of the franchise. On the other side, the Rams are a squad with veteran players who were in negative team environments. And it felt like we would never see moments like this for Beckham and Stafford. I will be happy for both organizations, no matter who wins. But unfortunately there can only be one. The defensive line and experience make me side with the Los Angeles Rams winning the Super Bowl 31-24. Enjoy your Super Bowl Sunday!