Unlocking the potential of weekly player volatility in daily fantasy football gives gamers a competitive edge. A key metric on PlayerProfiler, Weekly Volatility measures a player’s week-to-week fantasy point scoring oscillation. This article will track the most volatile wide receivers and provide insight on when to deploy them in large-field GPPs. Using matchup and usage data combined with advanced stats to pinpoint the best plays yields the best ROI from volatile players. The focus will be on those highly volatile players with cheap salaries and low projected ownership who make screaming plays with tournament winning upside.

Keenan Allen chalk week gives fantasy gamers the perfect chance to pivot to Mike Williams. He offers a main slate leverage play for Week 9 with an enticing $5,100 salary on DraftKings and projected rostership at less than 10-percent. His 11.0 Weekly Volatility mark ranks No. 7 among qualified wide receivers and denotes his extreme fantasy scoring fluctuation. He’s notched two 20-plus fantasy point performances, and busted with fewer than five fantasy points three times this season. But he’s also trending in the right direction. Williams saw eight targets in two of his past three games, which resulted in the two aforementioned 20-point fantasy outings. In Week 8, Williams ran 40 routes and played 91.5-percent of the snaps, both season highs for the big-bodied receiver. 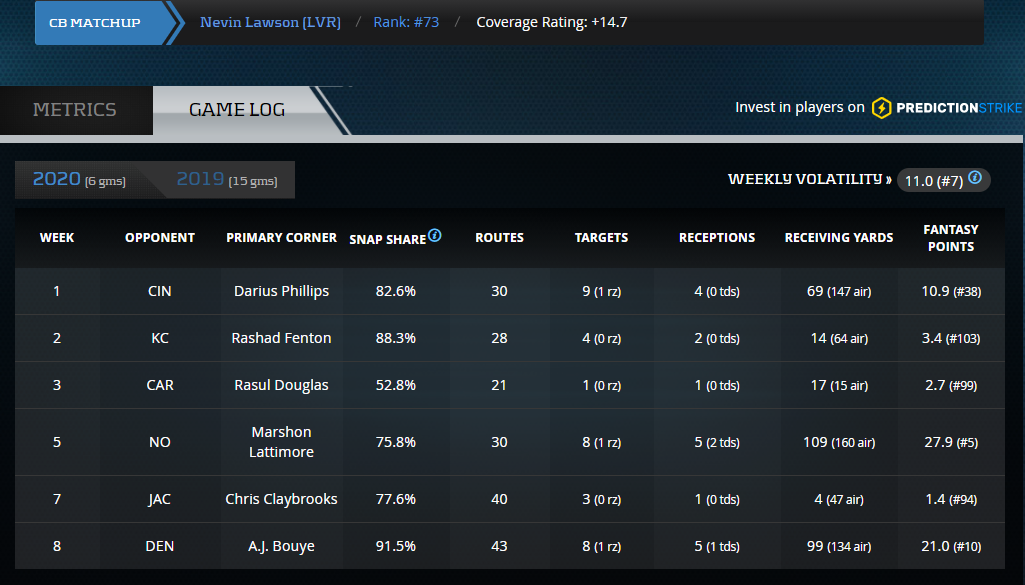 Williams has turned his No. 5-ranked Average 17.2 Target Distance mark into 17.3 (No. 10) Yards per Reception. He’s recorded five catches of 20-plus yards this season. According to Sharp Football Stats, Las Vegas allows an explosive pass play rate of 9-percent, which ranks among the highest in the league. The Raiders have yielded 23 pass plays of 20-plus yards.

Oddsmakers predict a high-scoring, close game with a projected total of 52, and they favor the Chargers by a point. Williams draws a primary cornerback matchup against Nevin Lawson, while Allen figures to line up against Lamarcus Joyner. Neither Lawson nor Joyner possess the ability to smother opposing receivers, but Williams gets the more favorable individual duel. Joyner comes in at No. 51 in PlayerProfiler’s cornerback rankings, while Lawson owns the No. 73 rank. With the weather becoming more volatile week-to-week, indoor matchups like this one at SoFi Stadium offer static environments that favor scoring.

Julio Jones Has Entered the Chat

Julio Jones consistently ranks among the most volatile fantasy football assets year-to-year. This season is no different, with the aging alpha receiver recording an 11.0 (No. 7) Weekly Volatility mark. Capable of a lineup-making day whenever he steps on the field, he’s a popular DFS play to say the least. But any week where Jones’ projected rostership hovers near 10-percent presents an opportunity. With the Seahawks-Bills contest carrying the highest projected total on the main slate at 55 points, Tyler Lockett, Keenan Allen and Stefon Diggs all look chalky. But not Jones ($7,200), who offers a 30-point ceiling and a cheaper salary than Diggs.

The Falcons play the Broncos in what’s shaping up to be an overlooked gem with a projected total of 50 points. Jones squares off in a primary matchup against CB Michael Ojemudia, who allowed Diontae Johnson to post a 30-point fantasy outing in Week 2. Ojemudia hasn’t faced a test against a receiver of Jones’ caliber since then, which bodes well for Jones’ potential to shine. And while predicting TDs for Jones remains an exercise in futility, his pair of Week 6 scores are his only ones this season. However, he’s drawn nine (No. 4) Red Zone Targets. In a testament to his efficiency, he averages 2.96 (No. 2) Yards Per Route Run, and owns a 129.9 (No. 8) QB Rating When Targeted.

Calvin Ridley (foot) didn’t practice Wednesday or Thursday, and his day-to-day status needs monitored. If he can’t suit up, that may push Jones’ rostership levels into uncomfortable territory.

Change of Scenery Under Center For Chark

With the Jaguars making the change from Gardner Minshew to Jake Luton, D.J. Chark deserves GPP consideration this week. Chark suffered through Minshew’s inconsistent play, bad decision-making and tendency for short throws. Minshew threw 18 Interceptable Passes through Week 8, the second-highest mark in the league. His 6.5 (No. 24) Adjusted Yards Per Attempt, 7.4 (No. 22) Air Yards Per Attempt, and 83.9 (No. 25) True Passer Rating all leave much to be desired.

Chark, no stranger to the boom-bust lifestyle, carries a 9.3 (No. 17) Weekly Volatility rating that underscores his fantasy vulnerability. But he gets a potential upgrade in Luton and figures to earn the lion’s share of targets. Always a threat to score, he has drawn eight (No. 9) Red Zone Targets. With a bye week to prepare the offense under Luton, it’s a low-key smash spot for Chark against the Texans. Houston’s secondary allows +6.90 fantasy points above the mean to opposing receivers, the fourth-highest mark in the league.

Chark carries his lowest salary of the season ($5,500) on DraftKings, where it dipped below $6,000 for the first time. His rostership projects to be minimal, offering leverage in a game with a projected total of 50.5 points. Vegas favors the Texans by 6.5 points, and if the Jags fall behind early, then Luton could eclipse 50 pass attempts.

Gamers also should consider Chark’s teammate Keelan Cole. He has earned only one fewer target than Chark on the season, and each player has caught a team-high three receiving TDs. Cole projects at a rostership of less than 5-percent with a $4,000 salary.