Free square running backs refer to RBs that come in severely underpriced relative to their projected roles. These players are often priced at the stone-minimum, opening up the DFS slate to jam in the premium plays. DraftKings has raised the salary floor for running backs this season from $3000 to $4000, so spotting these freebies is paramount if we want to afford the high-floor, high-upside smash plays. Using PlayerProfiler’s advanced stats, metrics, and analytics, we can identify RBs that fit the criteria. Here are the free square RBs for the NFL Week 10 DFS main slate.

Christian McCaffrey returned for one week and promptly injured his shoulder, putting his status in doubt for the next few weeks. Before that injury news broke, DraftKings decided to drop Mike Davis’ salary to the stone-minimum for an RB. In the six games Davis filled in for CMC earlier this season, he averaged 17.3 fantasy points and finished as an RB1 three times. Davis’ main source of fantasy points was his receiving role, ranking No. 3 or better among qualified running backs in targets, receptions, and receiving yards. In a full-PPR format like DK’s, that gives any RB an insane floor to build around in cash lineups.

What’s even more impressive about the 28-year-old journeyman RB is his elusiveness. Davis boasts a 38.5 percent (No. 2) Juke Rate with 49 (No. 4) Evaded Tackles on his 128 touches. He clearly still has the juice in his legs that led to his 11.18 (76th-percentile) Agility Score even at his advanced age. His elite receiving role, ability to create on his own and minimum salary makes him a lock in cash games.

If DFS gamers want to afford the expensive game stacks in the BUF/ARI and SEA/LAR matchups, they’ll need to hit the lock button on Davis in tournaments as well. He’ll carry record-breaking ownership this week, but you’ll either need to play him in every lineup or fade him entirely. You’ll gain massive leverage on the field with other cheap options, but the chalk is the chalk for a reason.

Speaking of the chalk, David Johnson’s first-quarter concussion tanked about 30-percent of the field’s lineups in cash last week. The bright side is that it gave the Texans a chance to free Duke Johnson. Duke played 83.3-percent of the snaps and received 21 touches in David’s absence. He struggled on the ground with just 2.6 yards per carry, but he corralled all four of his targets for 32 yards and found the end zone, delivering 16.3 DK fantasy points. More importantly, he saw 100-percent of the backfield’s carries and targets. The only other RB on the active roster is Buddy Howell, who has five career carries in his 37 games played.

Johnson’s efficiency was brutal last week, but that is bound to bounce back. Using PlayerProfiler’s Data Analysis Tool, we can see he was one of the most efficient and elusive RBs in the league, averaging a 30.2-percent Juke Rate from 2016 to 2019. He’s down at 20.8-percent (No. 30) this season. That’s likely due to the ankle injury that cost him two games earlier in the year, but the fact that the Texans fed him 21 touches last week means they trust his health. We can expect his elusiveness to return to the norm soon, especially given his receiving ability. It’s far easier to make defenders miss out of the backfield than with runs up the middle.

David Johnson has a 70.6-percent (No. 1) Route Participation mark and a 70.7-percent (No. 7) Opportunity Share as Houston’s lead back this season. While Duke may not repeat his 100-percent Opportunity Share, he should receive double-digit carries and at least four targets again playing in David’s role. With Mike Davis on the slate, DFS gamers won’t need Duke in cash lineups, but he’s a solid pivot in tournaments with a similar role projection and game environment.

If you really want to leverage the field and fade both the previous names, D’Andre Swift is a name to get excited about. He’s seen at least four targets in five straight games and saw 13 carries last week, his second-most of the season. He’s also paced both Adrian Peterson and Kerryon Johnson in snaps three weeks in a row. 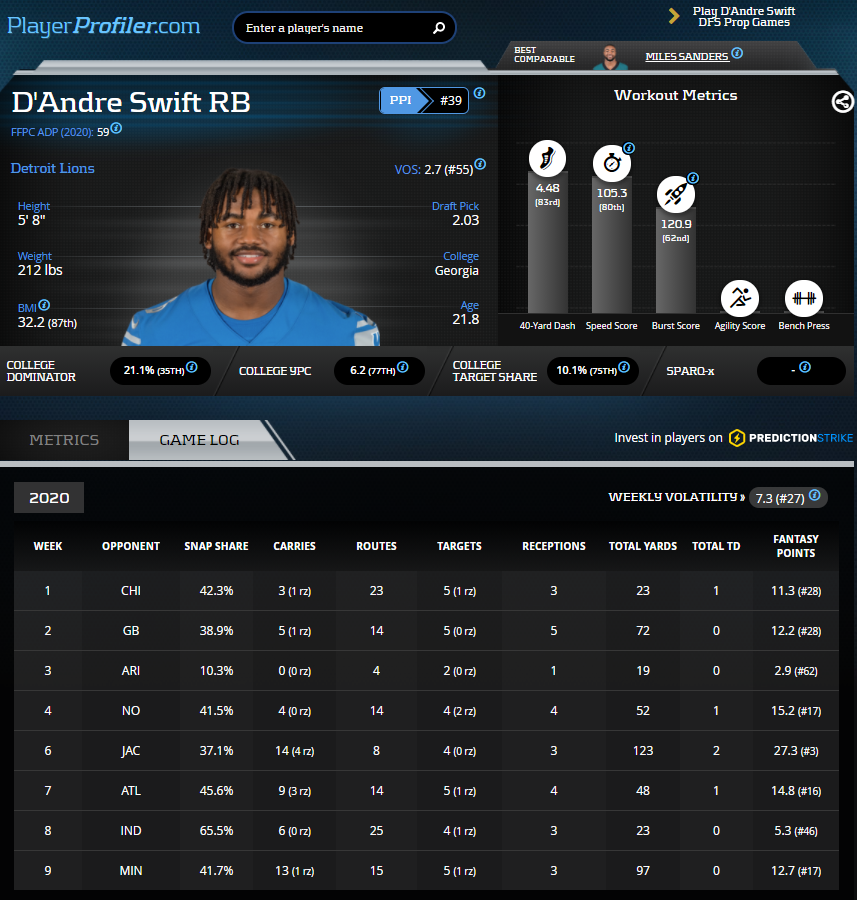 The Washington Football Team is also a signature run-funnel defense. They rank No. 1 in Defensive Passing DVOA but No. 17 in Defensive Rushing DVOA. According to Football Outsiders, they rank No. 26 in power run success where the Detroit offensive line ranks No. 9. While that edge doesn’t seem too significant, it does indicate that Swift will be able to reach the second level of the defense often. He’s thrived there with a 7.4-percent (No. 4) Breakaway Run Rate. Swift broke the slate in Week 6 (30.3 DK points) with multiple Breakaway Runs and touchdowns, so we know it’s in his range of outcomes.

Given the other cheap options at RB along with Alvin Kamara and Aaron Jones, Swift will check in with minuscule ownership. Most casual DFS gamers will also see the Washington defense and shy away from him. His snaps and opportunities are all trending in the right direction and we’ve already seen his explosiveness this season.