It’s Championship Week!!! Well, for most leagues, anyway. Which means the long, chaos-ridden journey that was the 2020 fantasy football season has arrived at it’s conclusion. Through a full blown pandemic, when it might have been safer to do otherwise, the NFL trudged on despite fear of cancellation.

Whether or not we should be at this point is another story, but we are here. Football found a way to survive the season, and fantasy managers have done the same. For those competing at the end, a 2020 win would be special; cementing a championship in a memorable, albeit insane, year. The injury information is pertinent to victory in the final week- assuming Alvin Kamara isn’t on the opposing squad (otherwise, condolences). To The Infirmary!!!

The Saints are beat up at wideout, but that didn’t seem to matter against Minnesota on Christmas Day. Assuming Michael Thomas is back for their playoff run, the team should be fine without Smith. As for Mostert, his return to the reserve ends a troubled season that found the 28-year old struggling to stay healthy. Jeff Wilson, Jerick McKinnon and Tevin Coleman will likely all get opportunity this Sunday. Not ideal for a championship matchup.

In other injured reserve news, Lamical Perine is back practicing but his status for Sunday’s game against Cleveland is up in the air. There’s a chance John Brown suits up for Buffalo on Monday Night, which would impact Cole Beasley, who has been quite productive in his absence, in a negative fashion. Making his long-awaited return, George Kittle will take the field Saturday. Though coach Kyle Shanahan stated he would be on a snap count, Kittle should be trusted this week to provide value, even if on said “limited snap count.”

Fantasy managers who made it to the last dance without Jones will have to fight on another week without him. The same goes for those rostering Golladay. Samuel’s absence in San Francisco will add to Brandon Aiyuk’s value, while providing opportunity for the returning Kittle. Mike Williams could be the beneficiary of Henry’s vacated targets, though another Charger’s wide receiver deserves more attention; Jalen Guyton. The undrafted wideout has been solid this season and had two more catches than Williams last week. His player profile isn’t one to ignore, either. 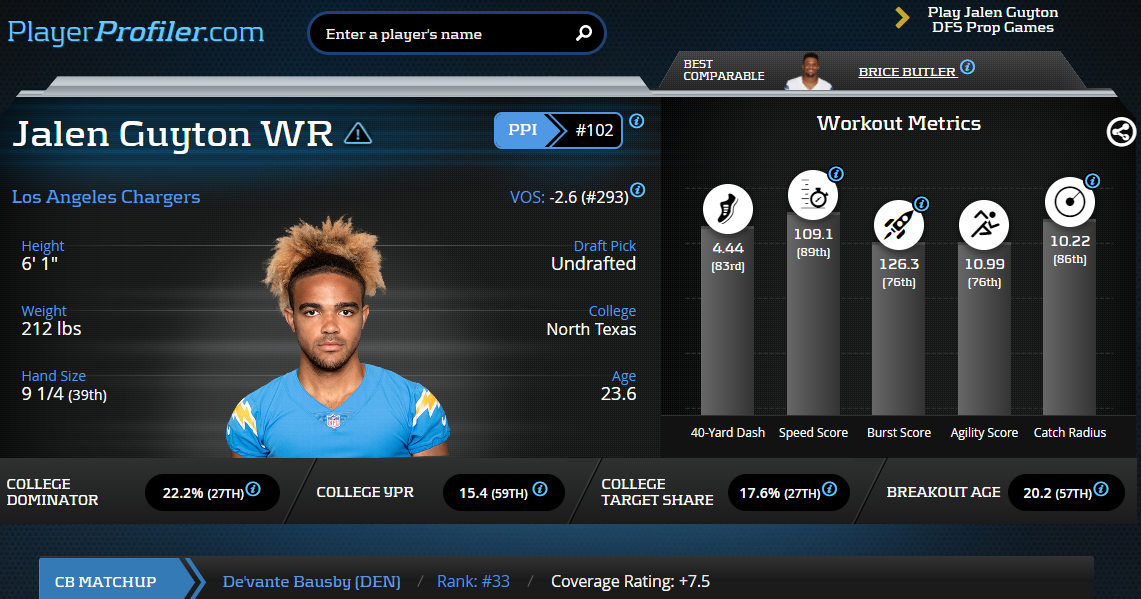 Multiple backs will be missing action this weekend, including Edwards-Helaire. While the team will turn to Le’Veon Bell to take the lead, fantasy mangers should not. Bell has averaged less than 4.0 yards per carry and has looked, at times, a shell of his former self. Rather than relying on the veteran, expect the Chiefs air attack to be heavy against a Falcons defense that bleeds points to fantasy receivers. With Jones out for Tampa, another big workload for Leonard Fournette is in store, though he has been dependent on touchdowns since joining the Bucs.

Melvin Gordon is a great play this week with Lindsay out. Gordon has played quietly well this season, ranking No. 14 among qualified running backs with 173 carries, No. 12 with 814 rush yards and No. 10 with nine total touchdowns. He also ranks in the top-13 at the position in Route Participation, Evaded Tackles and Big Runs. Gordon is a great value in DFS this weekend at $5600. Lastly, the Rams will be without Akers in a pivotal, divisional matchup. However, they still have Darrell Henderson. Let’s not forget about him.

McCaffrey will once again miss time, leaving the handcuff-of-the-year, Mike Davis, to do his thing. However, the Washington defense is stout versus the run. Speaking of the Washington Football Team, it appears likely they will be without McLaurin. Now that everyone is finally coming to terms with Logan Thomas as a bonafide tight end, what better week to have him in a lineup.

For those concerned about Hill’s availability, fret not; coach Andy Reid told reporters he expects the wideout to be ready to go for Sunday. The status of fellow receivers Robinson and Allen are a bit murkier. Darnell Mooney is a great play this week, regardless if Robinson plays or not. In the past four weeks, Mooney has accumulated 148 receiving yards and four touchdowns off of 13 receptions (out of a possible 22 targets). Oh yeah, the Bears face the Jags this week.

As for Allen, who struggled last week despite telling fantasy managers “don’t sit me,” his absence could open the door for K.J. Hill. The rookie seventh-rounder, at 6-0 and 197-pounds, is of similar size to Allen. Though Hill’s player profile reveals a lack of game-breaking speed, that is a trait shared with the veteran who has been a fantasy mainstay for years. Keep an eye on Hill as an end-of-the-year stash candidate.

Should Parker’s hamstring injury keep him out, look for Lynn Bowden to continue his surge. In the past three weeks, the rook has accumulated 150 yards off of 17 receptions. Gibson has a good chance to suit up Sunday, as does Elliott- much to the dismay of Tony Pollard fans everywhere. The difference is undeniable between the two players this year.

After perhaps the wildest season in fantasy football memory, everything comes down to one final game. Look at that, something “normal” for a change. Though the season will officially end this week for the majority of fantasy leagues, there are those who continue on through Week 17. For that reason, and for DFS fans, there can be no end for The Infirmary just yet. Until next week.