Using Over The Cap data, here are the five likeliest players to be cut in the offseason due to bloated contracts. These potential moves are made from a real-life NFL viewpoint. For fantasy football purposes, we’ll foreshadow the best fantasy football environments for said players to enter after release.

Mark Ingram signed a three-year, $15 million contract with the Ravens before last season. Unfortunately for him, the final year is not fully guaranteed. Entering his age-31 season next year, he’s likely to be a cap casualty with the Ravens on the hook for just $1.33 million of his $6.33 2021 cap hit. That means they save $5 million releasing him, which makes sense with J.K. Dobbins and Gus Edwards in the tuck. We won’t project the latter two’s fantasy football value now, but the arrow is up for the duo on a Ravens team averaging 37.2 (No. 1) and 32.6 (No. 2) Team Run Plays per Game, respectively, over the past two seasons. A departing Ingram would free up at least 30-percent of the backfield’s opportunities.

The Lions would save $14 million releasing Matthew Stafford. Staring down a rebuild, it’s a coin flip if he returns to the team in 2021. A plethora of landing spots are good fantasy football environments for him – Bears, Broncos, Colts, Cowboys, Patriots, Washington Football Team – but this one’s for John (Elway, that is)!

John Elway’s never met a veteran signal-caller he didn’t like — see Peyton Manning, Case Keenum, and Joe Flacco — and with a better-than-appears roster, Stafford’s worth the dart throw in what’s set to be Elway’s final year under contract as Broncos General Manager. A healthy Broncos team in 2021 is a dark-horse playoff contender. 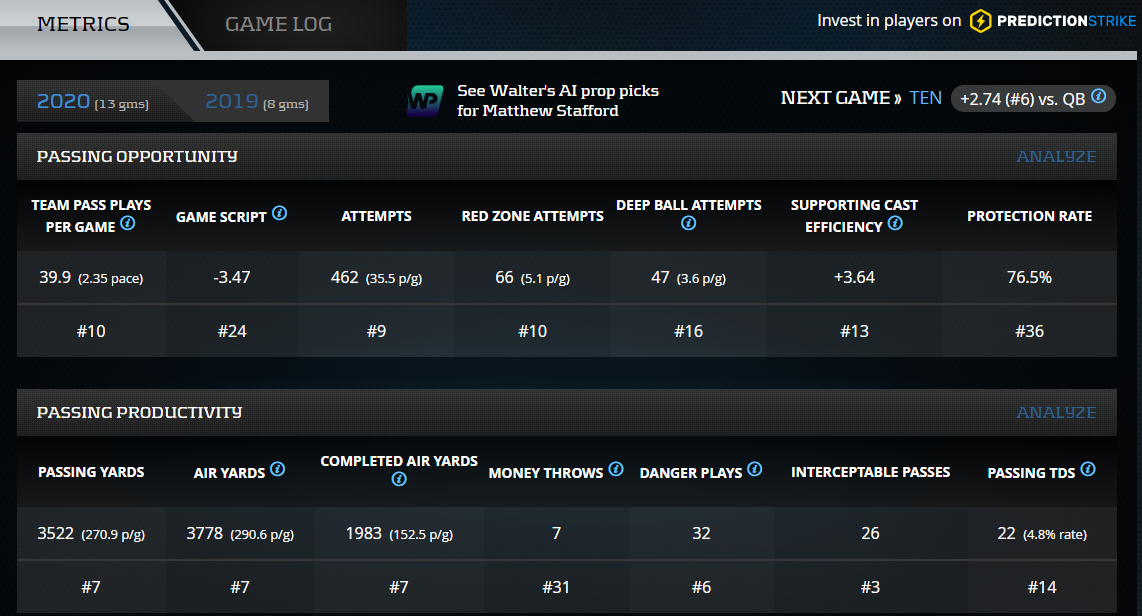 Stafford is what Drew Lock aims to be. He’s logged 462 (No. 9) pass attempts, 47 (No. 16) Deep Ball Attempts, and 3,778 (No. 7) Air Yards on a Lions team averaging 39.9 (No. 10) Team Pass Plays Per Game. In his best Stafford impersonation, Lock has attempted 53 (No. 11) Deep Balls on a much-smaller 323 (No. 22) pass attempts, to pair with 2,920 (No. 20) Air Yards. Again, on only 323 attempts. Lock has missed time as well. If acquired, Stafford’s supporting cast includes Melvin Gordon, Courtland Sutton, Jerry Jeudy, Tim Patrick, K.J. Hamler, and Noah Fant. Oh yeah, Vic Fangio’s calling the plays on defense with defensive stalwart Bradley Chubb and a returning Von Miller.

Odell Beckham, at age-28, is more likely to be traded, but none of his $15.75 million cap hit is guaranteed going into the 2021 season. The Browns average 31.2 (No. 30) Team Pass Plays Per Game, and Jarvis Landry is proving he can ascend to the alpha receiver role in this limited passing offense, while Beckham has three years remaining on a very team-friendly deal.

With his 32.8-perecnt (No. 20) Air Yards Share and 25.3-percent (No. 35) Target Rate in mind, this is Beckham’s ideal landing spot. Desperate for an offensive playmaker, Bill Belichick bucks his trend of not spending over $9 million for a receiver and gets his man. Devoid of difference-making receivers for incumbent quarterback Cam Newton, Beckham instantly solves the New England’s deep-threat problem and becomes a go-to pass-catcher. Acquiring the Browns receiver creates easier matchups for N’Keal Harry and diamond in the rough Jakobi Meyers as well, with Julian Edelman able to stay solely at slot receiver. Belichick finagles Beckham for a second- and fifth-round pick.

There’s no way David Johnson is staying on Houston’s 2021 roster with a $9 million cap hit. For context, that would be the sixth-highest cap hit for a back going into the season. Fortunately for the Texans, releasing him saves $6.9 million of cap space. As of this writing, they expect to be in the red at the start of the offseason. Johnson has seen a 69.7-percent (No. 9) Opportunity Share this season, but has parlayed the opportunity into 452 (No. 36) rushing yards, 11.7 (No. 27) Fantasy Points per Game, and a 3.9 (No. 47) True Yards Per Carry average.

Leonard Fournette has fallen out of favor with the Bucs and LeSean McCoy is in the latter stages of his career. Both backs are not under contract for 2021, meaning Johnson can sign on a McCoy-ish deal and serve as Tom Brady‘s true James White-esque pass-catching back. Say what you want about Johnson, but he hauled in 50 receptions as a starter as recently as 2018. He followed that up with 36 (No. 24) catches in 2019 in 13 games. Of course, we can’t forget his 80-catch campaign in 2016.

Injury cost Tyrell Williams all of 2020, but he’s on the books for $11.6 million in 2021 for the Las Vegas Raiders. Projected to be over the cap, Williams is the victim of a numbers crunch. Fortunately for him, there’s a slew of teams looking for a deep-threat receiver. He did have a 13.3 (No. 29) Average Target Distance mark in 2019.

Tyrell Williams, 29 in February, is a perfect three-year deal candidate for the Bengals as a compliment to emerging receiver Tee Higgins and slot-man Tyler Boyd. With A.J. Green all but washed and John Ross collecting dust as a healthy inactive, acquiring Williams fills a need and still allows the Bengals to address the offensive line in the draft with their presumed top-five draft slot.