We are back for Week 6 of our weekly article dissecting the stack opportunities on the main slate. As a reminder, the goal of this piece is to identify exciting combinations of quarterbacks and their wide receiver teammates to pair together in our daily fantasy football lineups. The strategy allows us to double dip on fantasy points when those two teammates connect for big plays. Since this is more of a tournament tactic, we also consider projected ownership. We want to specifically target under the radar stacks gain leverage on the field. To do this, we utilize the wonderful advanced stats and metrics only PlayerProfiler can provide.

Week 5 featured a mixed bag of results. We had a QB and a WR smash, but unfortunately not from the same stack.

Our marquee play last week was Deshaun Watson. At under 10-percent owned, he nearly delivered 30 DraftKings fantasy points. He ended up among the top plays on the day. We paired him with Will Fuller who had a decent game of his own, finding the end zone en route to a 15-point day. His teammate Brandin Cooks stole the show though, going over 100 yards and a touchdown. That double stack was definitely in play with both Cooks and Fuller.

Daniel Jones and Darius Slayton formed the budget stack. Jones became a popular tout as the week went on, and over a quarter of the field played Slayton with everyone looking to get exposure to the Giants against the Cowboys. Jones finished with a disappointing nine DK points, but his teammate Slayton exploded for 24 and what could’ve been so much more with another touchdown being wiped off the board from a penalty.

The last stack was the risky Joe Burrow/Tee Higgins combination going against Baltimore. We banked on the Bengals trailing most of the game (check) and Burrow seeing high attempts again (nope). Burrow was bombarded all day by a ferocious Ravens pass rush that generated 18 hurries. In the end, it was a rough day at the office for the entire Bengals offense as Burrow finished with only six points and Higgins with 10 points. We got the game state we hoped for, but not the efficiency, which is much more erratic week-to-week.

This is a tough week on the main slate with no Russell Wilson, Patrick Mahomes, Josh Allen, Dak Prescott, or Kyler Murray. As of this writing, we assume Cam Newton will not be playing either. Early lines show no games projected to hit 55 total points, which does mean there is unlikely to be a chalky shootout.

Lamar Jackson has disappointed fantasy gamers with only two 25-plus point games through five weeks. Worse, he’s been outside the top-12 QBs in the other three weeks. Don’t let this string of variance deceive you though. Jackson still has the highest ceiling on any given week. At $7700 on DraftKings, he is as cheap as he has been this year.

Baltimore is a touchdown favorite against Philadelphia this week. Fantasy gamers will be scared off, thinking the Ravens will run the ball to grind clock. Last week showed something different though. In a game where they led by multiple scores almost wire-to-wire, Jackson saw a huge increase in pass attempts. He averaged 24.5 over the first four weeks; he had 37 last week. They are trying to get him going through the air.

Marquise Brown is set to be the main beneficiary of this passing uptick. Last week, his routes and targets jumped to season highs. He’s commanding a 26.9-percent (No. 10 among qualified wide receivers) Target Share and a 44.0-percent (No. 3) Air Yards Share. He is consistently targeted deep down the field, creating a volatile, splash play machine waiting for that blowup 150-plus yard, two-score game. This is the week.

Averaging 39.2 (No. 4) Pass Attempts per Game but only 6.9 (No. 28) Air Yards per Attempt, it might not be fair to say Gardner Minshew is slinging it. However, despite the heavy concentration of short throws, Minshew’s volume offsets any efficiency concerns. He still ranks top 10 in volume stats such as Passing Yards, Air Yards, and Passing TDs. We care about efficiency in dynasty formats, but this is a weekly game; give us all the volume for the buy-high candidate.

This week in particular sets up to encourage plenty of passing action from the Jaguars against the Lions. Currently projected to be 3.5-point underdogs in a game with a 54.5-point total and two very forgiving defenses, this is the week’s most likely shootout.

For the stack, we’re going with Laviska Shenault. The dynamic rookie has earned more and more opportunity each week. That culminated in last week’s eight-target performance on a season-high 35 routes run. Mostly used as a gadget player early, he has taken on a larger role in the passing game as a true wide receiver. He’s already shown how explosive he can be with the ball in his hands, evidenced by his 136 (No. 9) Yards after Catch. Similar to Marquise Brown, with the opportunity combined with the dynamism, it’s only a matter of time until he has a monster, slate breaking week. If you want to go all in on this game shooting out, throw D.J. Chark into the lineup and run it back with Kenny Golladay or T.J. Hockenson.

Ryan Fitzpatrick keeps delivering. DraftKings keeps depressing his price as if they’re waiting for the other shoe to drop. So far, it hasn’t. The magic isn’t stopping this week against the Jets. Priced under $6K on DK, he’s primed to once again outperform expectations. According to Ben Baldwin’s rbsdm.com, the Dolphins are top-10 in early down pass rate in non-garbage time. Despite being favorites, Fitzpatrick will continue to throw. 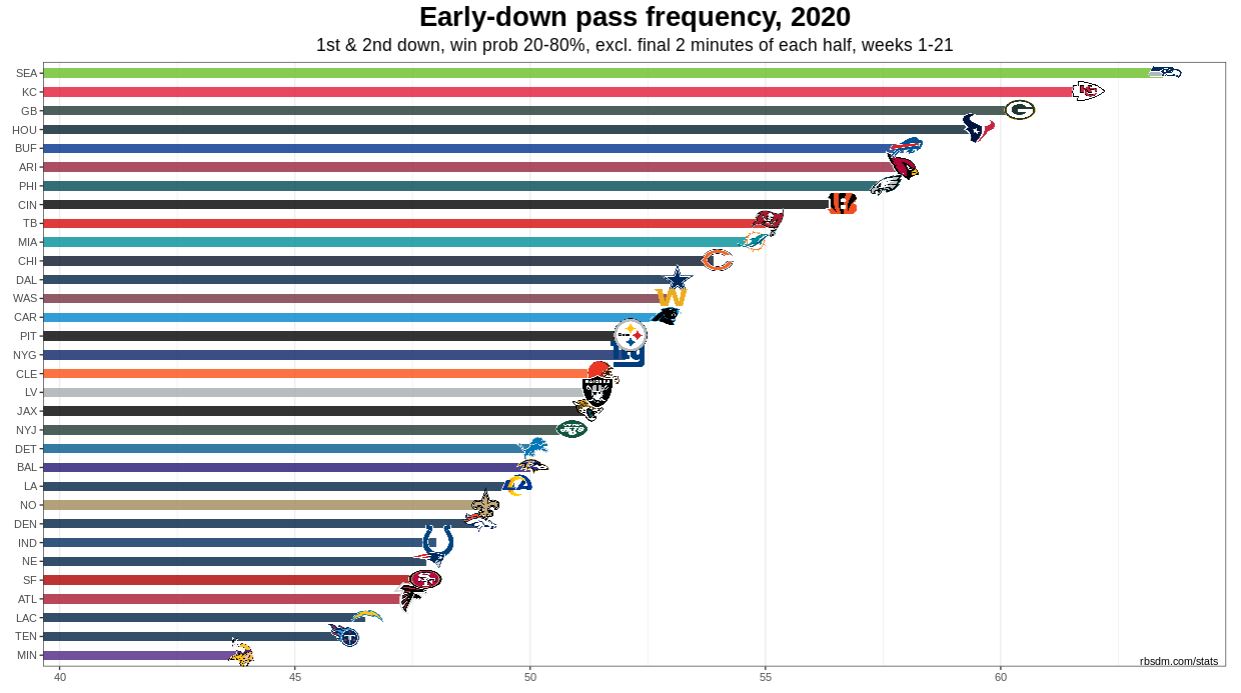 Fitzpatrick’s rushing continues to be a huge boon to his fantasy numbers as well. He ranks No. 7 or better across the board in quarterback rushing attempts, yards, and touchdowns. That tactical scrambling is what unlocks his ceiling on a weekly basis.

At $6.3K, DeVante Parker is underpriced and well-positioned as the unquestioned WR1 on the Dolphins. The Jets have struggled recently containing wide receivers. Last week, DeAndre Hopkins finished with six receptions for 131 yards and a touchdown. The week prior, the Jets allowed Tim Patrick to break out for 113 and a touchdown. In both cases, they were primarily matched up against Lamar Jackson, whose -33.0 Coverage Rating ranks No. 71 among qualified cornerbacks.