With Pro Days kicking off this weekend, NFL trades/free agent signings picking up and the Senior Bowl in the rearview mirror, here is my version of how Round 1 of the 2021 NFL Draft will go.

This mock features a trade between the Denver Broncos and New York Jets, with Denver moving from the No. 9 pick to No. 2 in order to make a move for a quarterback.

Trevor Lawrence was 38-2 at Clemson, finishing with an impressive 10,098 passing yards, 90 passing touchdowns, with just 17 interceptions.

With ongoing rumors of distrust in Drew Lock leaking from the Broncos organization, a trade is on the horizon. Denver leaps into the No. 2 pick hoping to finally put their quarterback issues to rest after five long years.

Part of being a smart organization is understanding position scarcity. Miami won’t make the same mistake Las Vegas made last year in passing on Tristan Wirfs in favor of Henry Ruggs. The Dolphins take the blue-chip offensive tackle and circle back to the wide receiver position in the second round.

The Justin Fields “can’t read defenses” narrative is the biggest crock of shit this draft season so far. https://t.co/YcX7RXqJQo

Protecting Joe Burrow is the only option for the Bengals. A promising career start was halted by a torn ACL, and after landing another top-five pick, Cincinnati takes an offensive lineman in the first round for the fourth time in seven years.

After spending in free agency on wide receiver, the Eagles shore up their defensive backfield with the most pro-ready cornerback in the draft. Farley, an ex-quarterback and wide receiver, was clocked at 4.24 while running a 40 at the Exos Pro Day Combine in February.

The Lions are no stranger to drafting prolific collegiate wide receivers in the top-10, selecting Charles Rogers at No. 2 in 2003, Roy Williams at No. 7 in 2004, and Calvin Johnson at No. 2 in 2007. Detroit opts for the most talented WR prospect since Megatron in Ja’Marr Chase.

Ja’Marr Chase has the most upside in 2021 Rookie Drafts ? pic.twitter.com/pKMiQ9yBUo

Teddy Bridgewater has an out in his contract after 2021, giving Trey Lance a full season to learn from the savvy veteran. Lance started in just 16 games at NDSU and has only played in one exhibition game since their National Championship win on January 11th, 2020.

Is he in the top-3 quarterback conversation for you?

Since 2012, the Jets have used eight of 10 first round picks on defense. That trend continues in 2021 with Patrick Surtain.

After finishing bottom-five in points allowed (29.6) and averaging only 1.9 sacks per game in 2020, the Cowboys bolster their defensive line with the Miami big man. The 6-7 Rousseau finished his redshirt freshman campaign with 19.5 TFL’s and 15.5 sacks before opting out of the 2020 season. Having only played in 14 college games, his versatility along the defensive line makes up for his lack of experience.

There are those who see Slater as an interior offensive lineman, but he likely starts his career on the outside. New York needs help along the line after a 2020 season where Daniel Jones was frequently injured and Saquon Barkley tore his ACL.

The 49ers can move on from Jimmy Garoppolo before June 1st and save nearly $24 million in cap space while accruing only $2.8 million in dead cap. Kyle Shanahan brings in the 2021 version of Joe Burrow to pair with Brandon Aiyuk, Deebo Samuel, and George Kittle.

With Hunter Henry leaving in free agency, the tight end room is looking scarce for the first time in almost 20 years for the Chargers. Pairing Kyle Pitts with Justin Herbert is like pairing Philip Rivers with Antonio Gates. It just works.

The Kid is ALL-IN on Pitts!!! pic.twitter.com/OEiFIM7mi2

Adam Thielen is entering his age 31 season, and the Vikings are building for the future with back-to-back first round picks being used on SEC star wide receivers. This would create the best trio in the NFL, reminiscent of the late 90’s Viking trio of Randy Moss, Chris Carter, and Jake Reed.

DeVonta Smith has the #1 Teammate Score of all-time ? pic.twitter.com/zhK213D4ZL

The best deep threat in the draft falls right into New England’s lap. After much of 2020 was spent targeting Damiere Byrd, whomever is the Patriots quarterback in 2021 will have a top talent out wide.

Patrick Peterson finished outside the top-50 in Yards per Target Allowed, Coverage Rating, Passer Rating Allowed, and Catch Rate Allowed in 2020. Arizona needs help in the defensive backfield, and the son of former Pro Bowl wide receiver Joe Horn is here to help.

The value of Parsons at pick No. 17 is ridiculous. Let’s pray Mike Mayock doesn’t mess this one up.

In a COVID-affected season with limited live scouting, the Dolphins didn’t have to go far to watch Jaelan Phillips. He transferred to Miami in 2019, finishing with 15.5 tackles for loss and eight sacks in 10 games.

With a top-five defense, Washington needs to focus on surrounding whoever plays quarterback with talent. Rashod Bateman brings an 88th-percentile College Dominator Rating and 95th-percentile Breakout Age to the table. Posting him up outside with Terry McLaurin would give opposing defenses fits.

Rashod Bateman is for real! @pahowdy joins the #UnderworldPod Ep.528 to break down the best wide receivers in the 2021 NFL Draft ?

After Kyle Long‘s early retirement in 2020, Chicago was stuck with Bobby Massie at right tackle. Samuel Cosmi is a lean offensive lineman at 300-pounds, but playing next to the veteran Massie will help pace his learning curve. He started 34 of 35 games at Texas, playing both left and right tackle.

Since 2017, GM Chris Ballard has only made two picks in Round 1. Losing Anthony Castonzo after the season will force his hand to take Dillon Radunz out of North Dakota State in the first to protect Carson Wentz’s blindside.

With Jayon Brown and Jadeveon Clowney free agents, Mike Vrabel will pound the table for one of the most athletic linebackers in the draft. Owuso-Koramoah lines up all over the field, blitzing from the middle, covering in the slot, or rushing the passer from the edge. 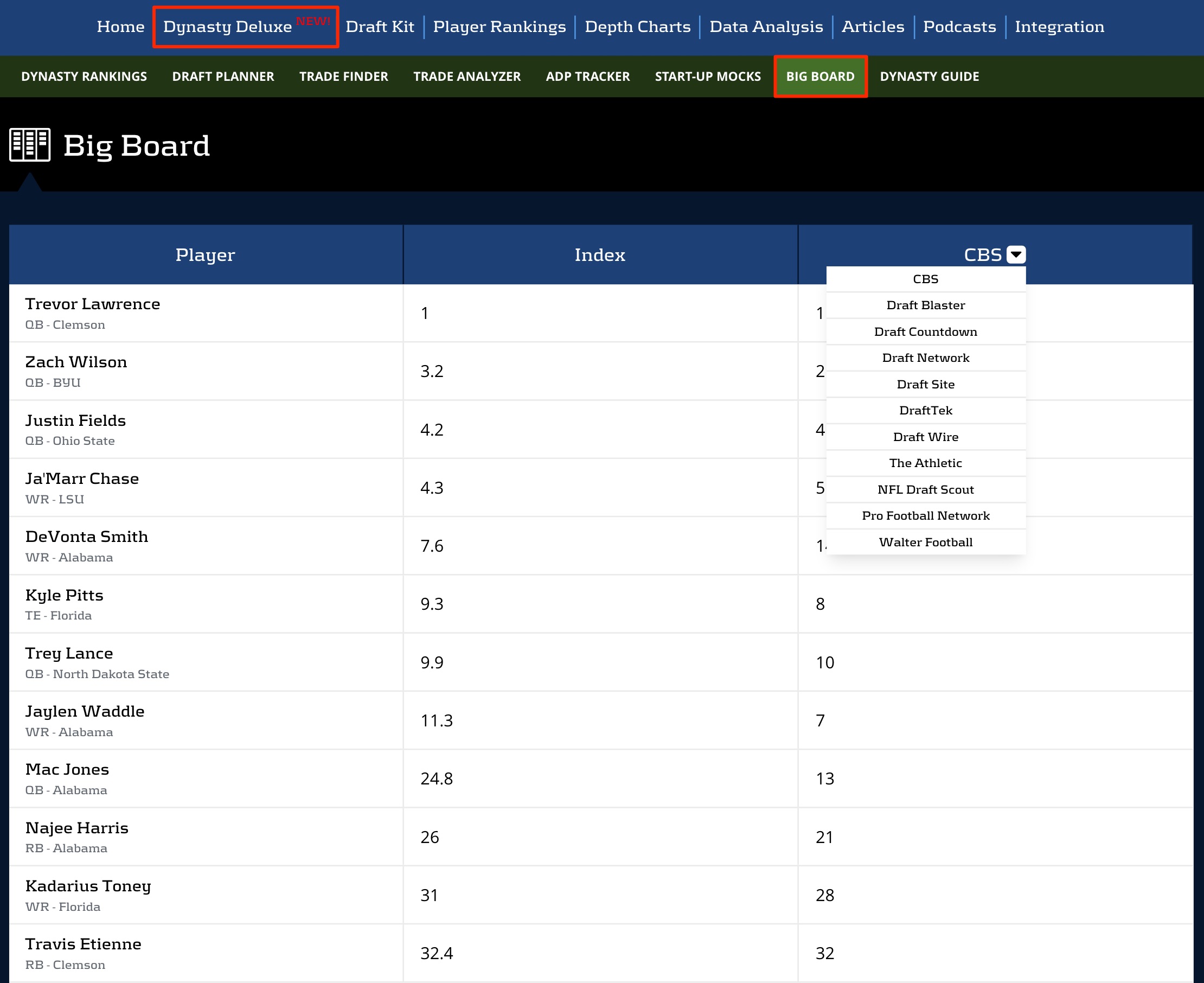 The athletic, raw talent out of Michigan falls to the 23rd pick after only playing in four games last season. Paye would be the fifth first-round defensive lineman drafted by the Jets since 2012.

Pittsburgh has spent their first pick on defense for eight straight seasons. With Maurkice Pouncey retiring, the Steelers opt for the versatile interior lineman who played both tackle and guard at USC.

The Browns will be reloading the front seven in 2021 with Larry Ogunjobi, B.J. Goodson, and Olivier Vernon entering free agency. If Zaven Collins played at Ohio State or Alabama, we would be talking about a top-five pick. In three seasons at Tulsa, Collins finished with five interceptions, 7.5 sacks, 25 tackles for loss, and 236 tackles.

Rondale Moore checks every box athletically and on the field, having logged 2,215 all-purpose yards and 14 touchdowns as a true freshman in 2018. Here, he goes to one of the few NFL teams that uses advanced stats and metrics in their process.

With limited cap space to work with, Malcolm Jenkins turning 33, and both Marcus Williams and P.J. Williams hitting free agency, New Orleans has few options. Trevon Moehrig is the best player available on the board at No. 28 and would help New Orleans’ top-three scoring defense stay near the top of the NFC.

The Packers finally address the wide receiver room, but they take the wrong receiver.

Who will be the 1st Wide Receiver off the board in the NFL Draft? ?

Big, strong, and mean. In the most Buffalo pick of the draft, the Bills take Michigan’s Jalen Mayfield to replace Daryl Williams at right tackle.

A leisure pick for the Buccaneers. Rob Gronkowski is a free agent, and O.J. Howard will begin the final year of his contract recovering from a torn Achilles. Tom Brady gets who many refer to as “Baby Gronk,” a hyper athlete out of Penn State.