Meet the Metric – Pace of Play In this installment of the Meet the Metric series, we’re diving into Pace of Play, which indicates plays per minute. Often I’ll use this metric in tandem with Team Pass Plays Per Game to analyze passing opportunity metrics. As with all metrics, context matters and it’s essential to consider the whole picture with the wonderful opportunity, productivity, and efficiency metrics on PlayerProfiler.

When glancing at the leaders in 2020, we notice several quarterbacks ranking highly in Team Pass Plays Per Game. At least outside of Ryan Tannehill, who fell into the group of high-efficiency outliers at quarterback. That said, let’s dive into some outliers in Pace of Play to help paint the picture of its value in fantasy football analysis.

As mentioned earlier, Pace of Play indicates plays per minute. More plays per minute will equal a higher Pace. Pair the metric with Team Pass Plays Per Game and it leads us to the passing opportunities for a given team and quarterback.

Below shows us the top-10 quarterbacks and teams in Pace of Play with their Team Pass Plays Per Game. 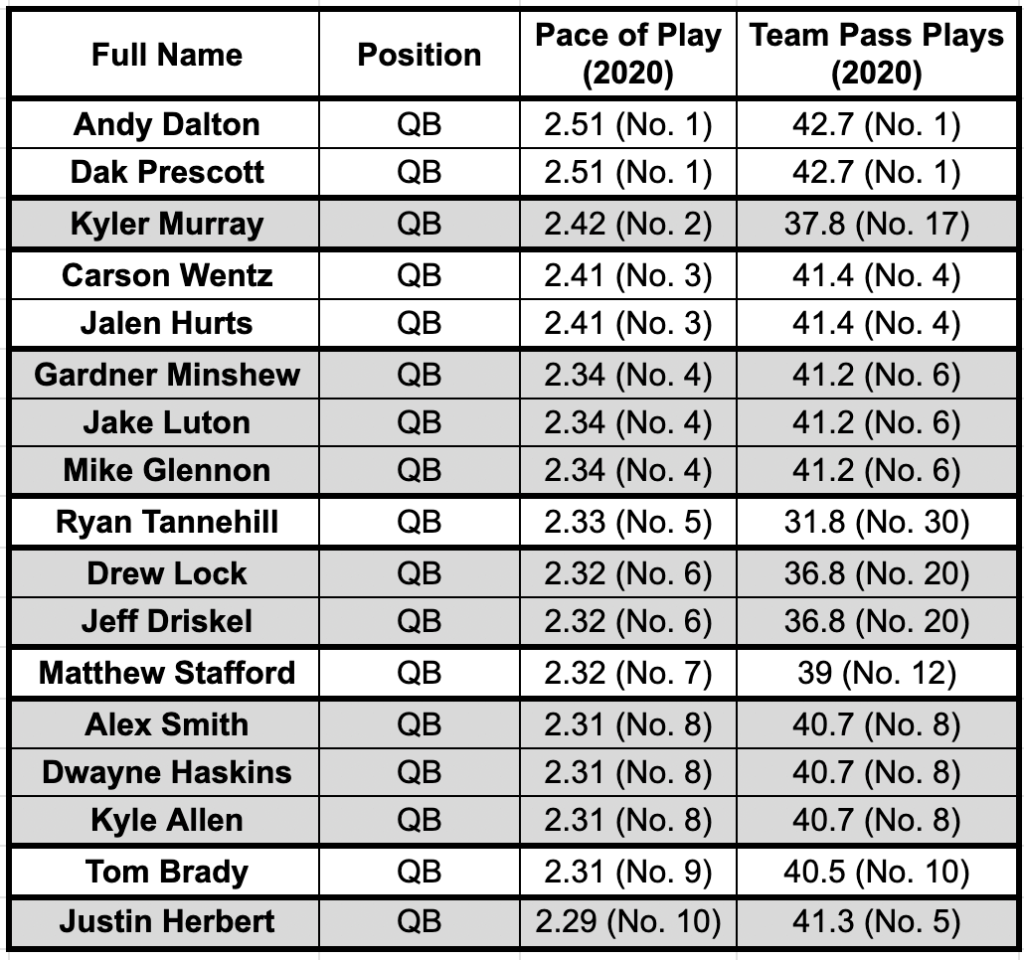 Certain players rely on opportunity and efficiency, or a mix of both. Ryan Tannehill boasted uber-efficient campaigns in 2019 and 2020, which translated into quality fantasy production. Meanwhile, Drew Lock ranked highly in Pace of Play, but in the bottom half of the league in Team Pass Plays Per Game, helping lead to a general lack of fantasy production.

Let’s touch on the Dallas Cowboys quarterbacks, particularly Dak Prescott assuming he’s healthy heading into the season. The team led the NFL with 42.7 Team Pass Plays Per Game and a 2.51 Pace of Play. Before Prescott’s injury, he ranked highly in a number of efficiency metrics with a +18.8 (No. 4) Production Premium and 8.0 (No. 6) Adjusted Yards Per Attempt.

Opportunity and volume plus efficiency led to fantasy goodness, evidenced by his 0.54 (No. 7) Fantasy Points per Dropback. A -4.77 (No. 27) Game Script mark indicated they often played from behind with their poor defense, which will lead to high passing opportunities once again in 2021 if that unit continues to struggle.

The Jacksonville Jaguars quarterback carousel in 2020 stands out with a high Pace of Play and high passing volume. They cycled through everyone’s favorite mustachioed quarterback Gardner Minshew, Jake Luton, and Mike Glennon. Partly due to a weak defense and playing from behind, evidenced by a -8.20 (No. 32) Game Script mark, the Jaguars ranked highly with a 2.34 (No. 4) Pace of Play and 41.2 (No. 6) Team Pass Plays Per Game.

Assuming the Pace of Play and passing volume remains high, that’s fun and exciting for Trevor Lawrence, the likeliest candidate for the No. 1 overall pick in the 2021 NFL Draft. Similar to Joe Burrow‘s rookie year, Lawrence and the Jaguars offense should rely on their passing volume in 2021.

Interestingly, Lamar Jackson and Aaron Rodgers finished second to last and dead last in Pace of Play. We know they produced well in 2020, which indicated they relied on efficiency. In Jackson’s case, he proved efficient with a +13.1 (No. 8) Production Premium, 7.1 (No. 16) Adjusted Yards Per Attempt, and 0.6 (No. 3) Fantasy Points Per Dropback. To no surprise, Jackson also finished top five in several rushing categories, with 10.6 (No. 1) Carries per Game, 1,005 (No. 1) Rushing Yards, and seven (No. 4) Rushing Touchdowns. The Ravens also led the league with a +5.42 Game Script mark, meaning they played with a lead a ton throughout the season. 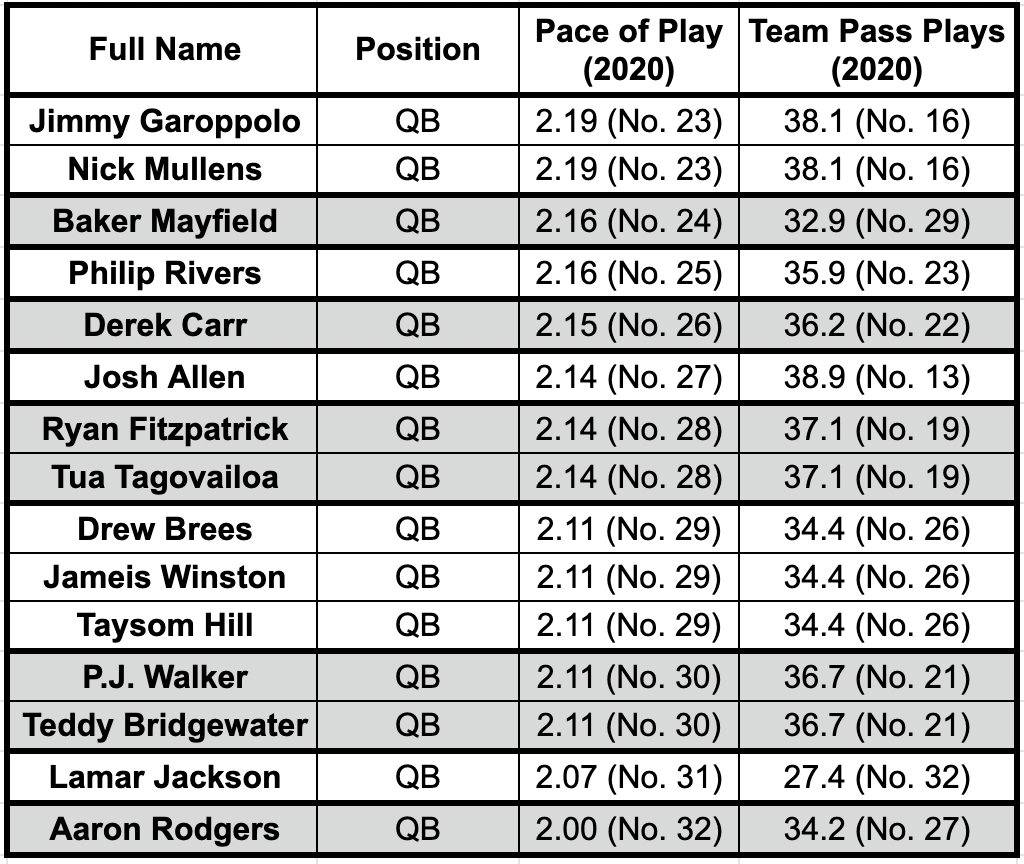 We’ve discussed Aaron Rodgers as the league’s most efficient quarterback with a +34.5 (No. 1) Production Premium in the 2020 efficiency outliers review. Rodgers tossed 48 (No. 1) Passing Touchdowns with 4,292 (No. 7) Passing Yards and 9.2 (No. 1) Adjusted Yards Per Attempt. That 9.1-percent Touchdown Rate isn’t sustainable with the Packers ranking last with a 2.00 Pace of Play and No. 27 with 34.2 Team Pass Plays Per Game. In 2019, Jackson also finished with a league-best 9.0-percent Touchdown Rate that fell to 6.9-percent in 2020. Rodgers could continue the high efficiency, but don’t expect the same level in 2021.

We have Josh Allen out here exploding in 2020 in all the metrics even though Buffalo ranked lowly with a 2.14 (No. 28) Pace of Play. Buffalo averaged 38.9 (No. 13) Team Pass Plays Per Game, and Allen finished with 4,546 (No. 5) Passing Yards and 37 (No. 5) Passing Touchdowns. Like Aaron Rodgers and Lamar Jackson, Allen ranked highly in the efficiency metrics with 8.1 (No. 5) Adjusted Yards Per Attempt, a +9.9 (No. 11) Production Premium, and 0.58 (No. 4) Fantasy Points per Dropback. With the leap in fantasy production and efficiency paired with his rushing production, expect Allen to dominate again in 2021.

Let’s note how Baker Mayfield ranks lowly in the passing opportunities, yet lacked efficiency in 2019 and 2020. In 2020, Cleveland averaged 32.9 (No. 29) Team Pass Plays Per Game with a 2.16 (No. 24) Pace of Play. We’ll note that the Browns often played with a lead given their +0.50 (No. 11) Game Script mark – the opposite of the Jaguars and Cowboys quarterbacks who finished top-6 or better in Team Pass Plays Per Game and Pace of Play.

Unlike Lamar Jackson and Aaron Rodgers, Mayfield recorded middling to below-average efficiency and productivity metrics. The lowlights were a -7.5 (No. 23) Production Premium and 7.3 (No. 12) Adjusted Yards Per Attempt. Assuming the passing opportunities don’t tick up a significant amount in 2021, Mayfield needs to rely on efficiency to take a step up from his 15.8 (No. 25) Fantasy Points per Game and 0.45 (No. 18) Fantasy Points per Dropback. A slow Pace of Play and low Team Pass Plays Per Game lends itself to a small margin for error in fantasy production and efficiency.