Maximizing your fantasy points per salary dollar is the key to cashing in DFS. If you want to afford the best cash plays on the slate, dumpster diving for underpriced value plays is the way to go. Here are the best DFS Flex values for Week 16 based on PlayerProfiler’s advanced stats, metrics, and analytics.

Prior to Clyde Edwards-Helaire’s early departure from Week 15, Le’Veon Bell solidified his role as the RB2 in the Kansas City backfield. The former fantasy superstar compiled 16 touches for 76 yards and also found the end zone against a Saints defense that ranks No. 2 in Defensive Rushing DVOA. Without CEH in the lineup, Bell should surpass the 16 touches he received last week.

The Falcons are solid against the run, but they have allowed the fifth-most RB receptions on the season. With a 10.8 percent (79th-percentile among qualified running backs) College Target Share and a history as an elite receiving back in the NFL, Bell should command a solid Target Share against Atlanta. The Chiefs easily have the highest implied total on the slate at 32.5 and are 10.5-point favorites. Bell has dominated early-down work over Darrel Williams, so we can reasonably expect close to 20 touches in this Game Script.

Cam Akers exploded in Weeks 13 and 14, relegating Darrell Henderson and Malcolm Brown to minimal roles. Henderson operated ahead of Brown for most of the season and has been far more explosive given his 4.49 (80th-percentile) 40-yard Dash speed. He’s averaged a solid 5.1 (No. 21) Yards per Touch over Brown’s 4.7 (No. 39) mark and has also commanded more goal line carries (7 to 4) and scored more touchdowns (6 to 5).

When Henderson was the featured RB earlier this season, he performed well, averaging 101.5 scrimmage yards per game. Sean McVay is on record saying both he and Brown will be heavily involved in the game plan, but we can cut through this coachspeak and expect Henderson to have the lead in touches. Should that be the case, he’ll easily smash his cheap salary on both sites. The Rams scored three rushing touchdowns and ran the ball 29 times in the first matchup between these two teams.

The Browns have one of the least sexy offenses in the league, but they are playing the Jets this week and have an implied team total of 28.5 points. Getting cheap exposure to this game is a sharp move, and Rashard Higgins stands out. Over the last three weeks, he’s ranked No. 2 on the team with 24 targets and No. 1 with 317 Air Yards. He’s also averaged 17.3 fantasy points thanks to two scores. 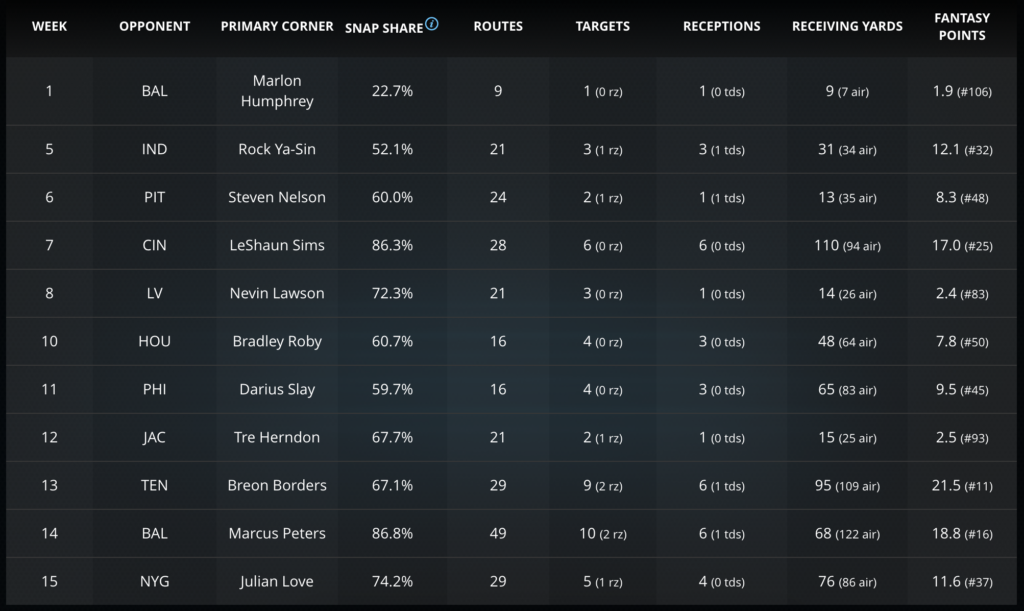 While the Browns are likely to rack up the rush attempts in this game, the Jets are a pass-funnel defense. They rank No. 8 in Defensive Rushing DVOA while ranking No. 29 against the pass. Baker Mayfield won’t face any pressure and should continue his streak of efficiency. That will benefit the receivers in this passing game, and Higgins’ usage has been strong.

We’ve all been burned by the fake Air Yards of Breshad Perriman and Denzel Mims, but no longer. Jamison Crowder has once again separated himself as the alpha receiver for the Jets after hauling in six balls for 66 yards in their first win of the season. It’s clear he is offering so much more than his teammates with his +30.4-percent (No. 3) Target Premium and 39.2-percent (No. 2) Dominator Rating.

The Browns rank No. 25 in Defensive Passing DVOA and their slot CB Kevin Johnson is one of their weakest links, allowing big games to Golden Tate, Corey Davis, and Tyler Boyd this season. Cleveland does have a solid pass rush, so Sam Darnold will be looking to get the ball out quickly to his favorite slot receiver. Crowder is a much better play on DK thanks to his low pricing and their full-PPR format.

With Terry McLaurin listed as doubtful, Washington will be desperate for playmakers against Carolina this week. Cam Sims figures to be the next man up after playing at least 86-percent of the snaps in each of his last five games. He’s averaged 5.2 targets per game over that span, which will undoubtedly rise without McLaurin in the lineup. Sims has also been surprisingly efficient with a +27.5-percent (No. 6) Target Premium and 10.9 (No. 6) Yards per Target. His near-minimum pricing on both sites makes him an excellent salary-relieving option this week.

XFL DFS cheat code Donald Parham is finally getting his shot in the NFL this week with Hunter Henry on the COVID list. For those that didn’t witness him in action, the 23-year-old is a monster with a 6-8, 240-pound frame. He also possesses a 100.4 (66th-percentile) Speed Score, a 129.9 (94th-percentile) Burst Score, and a 10.29 (92nd-percentile) Catch Radius. That makes him a natural in the red zone, where five of his 13 targets have come this season. He only has five total receptions on the season, but two of them have gone for touchdowns.

Parham isn’t in play on FD due to his price, but he’s the stone-minimum on DK at $2500. His pricing makes him viable as a Flex option if you want to pay up for Chiefs stacks including Travis Kelce. He also correlates well in Chargers stacks given their high team total (26.0) and his projected red zone role.