Entering Week 16, knowing who to start is imperative. All of our fantasy football assets are at our disposal. Last week, we suggested to start Drew Lock and Gus Edwards. This week, In Jalen Hurts We Trust.

We know that the biggest question you have every week is who to Flex – and perhaps who to stream at Q-B and tight-end, so here’s a handful of players to target for championship week. Stats don’t play favorites. For more takes, watch our Top 10 Takeaways:

Let’s use PlayerProfiler’s advanced stats, metrics, and analytics to unearth trends for fantasy football. Below are key statistics to know while following along:

Route Participation – How frequently a pass-catcher runs a route on his team’s pass plays.

Target Rate – Targets Per Routes Run. How frequently a pass-catcher commands a target in context with his Route Participation mark.

Weighted Opportunities – Determines which backs receive the most meaningful touches.

Jalen Hurts has totaled double-digit carries and at least 30 pass attempts in each of his first two starts. The opportunity parlays into a per-game rushing floor of 60-plus yards, 150-plus passing yards, and at least a touchdown. That’s at least 16 fantasy points. At least. Let’s juxtapose Hurts’ 19.3 fantasy points from Week 14, good for 11th-best among qualified quarterbacks that week, which is his floor, to last week. Although we’d like to see the completion percentage rise, Hurts’ pass volume elevated to 40-plus attempts v. the Cardinals. Against a stout pass DVOA, Hurts threw for three touchdowns on crucial third-and fourth-down plays, rushing for another on his way to 37.1 (No. 1) fantasy points.

Hurts is a rare high-floor, high-ceiling fantasy asset. The matchup is exploitable this week, too. Up against a Cowboys defense allowing the ninth-most fantasy points to quarterbacks, including a three-touchdown performance by Nick Mullens last week, and ranking as the 11th-worst pass DVOA, Hurts is in what #fantasyfootball Twitter calls a smash spot. Cowboys-Eagles have the fifth-highest implied point total of the week as well.

Cam Akers is out. Malcolm Brown, meanwhile, had a higher Snap Share, ran more routes and evenly split touches with Darrell Henderson behind Akers. The Seahawks allow the ninth-most fantasy points to opposing running backs. The Rams average the 29.6 (No. 8) Team Run Plays per Game, so Brown should be in Flex consideration this week.

Sony Michel – If Damien Harris Out

Sony Michel totaled a 46.9-percent Snap Share, 10 carries for 74 yards, nine routes run, and one target in the absence of Damien Harris last week. Monitor Harris, but the Patriots face off against the Bills in a game with the fifth-lowest implied point total (46) of the week. This indicates the Patriots can stick to their run-first tendencies. They average 32.1 (No. 3) Team Run Plays per Game, while the Bills defense ranks middle of the pack in rush DVOA, allowing the 14th-most PPR fantasy points to opposing backs. Thus far in limited action, he has created 41.2 (No. 79) Weighted Opportunities.

Sammy Watkins has quietly commanded six-plus targets in three of four starts since returning from injury. The Chiefs average 41.1 (No. 5) Team Pass Plays per Game. While he hasn’t done much with the opportunity, he’s clearly still the No. 2 receiver in the best offense in the league. 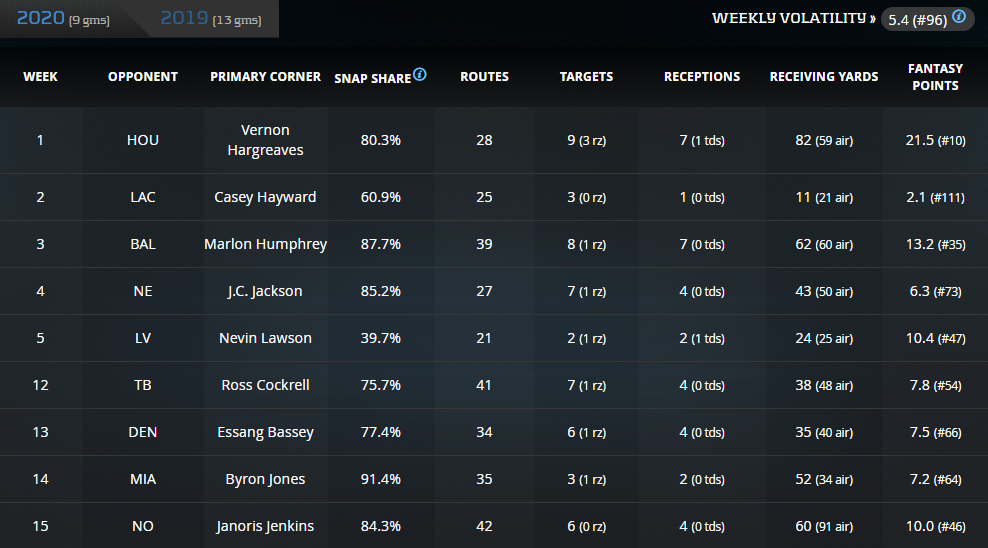 Watkins had an 84.3-percent Snap Share last week and ran a season-high 42 routes, good for a 14.2-percent Target Rate. Up against the Falcons this week, who allow the second-most PPR fantasy points to opposing receivers, we feel comfortable recommending Watkins. Chiefs-Falcons possess the second-highest implied point total of the week as well.

Darnell Mooney has scored in consecutive games, totaling at least a 73.0-percent Snap Share and 27 routes run in each outing. Mooney’s Target Rate last week was 18.5-percent as well. The Bears average 40.7 (No. 8) Team Pass Plays per Game and face off against the Jaguars this week — a defense allowing the ninth-most PPR fantasy points to opposing receivers and ranking as the league’s worst pass DVOA.

When we said Tyler Higbee would exceed fantasy football expectations, we meant during the second half of the season like he did last year. Higbee exploited the matchup against the Jets last week, recording a 4-67-1 receiving line, and now Gerald Everett is dealing with a concussion. When Everett missed time during the end of last season, Higbee went on one of the greatest five-week stretches for tight ends in fantasy football history.

Monitor Everett since the Seahawks, the Rams’ opponent this week, just got waxed by Logan Thomas, who recorded a 13-101 receiving line. Higbee totaled a 90.6-percent Snap Share, 24 routes run, and a 20.83-percent Target Rate on five targets last week.

A bet on Austin Hooper this week is a bet on the matchup. The Jets defense allow the most PPR fantasy points to opposing tight ends and rank as the league’s eighth-worst pass DVOA. Of late, the defense has allowed a touchdown to a tight end in five straight games — seven in that span — most recently including a 4-67-1 receiving line to Tyler Higbee. Hooper totaled a 69.4-percent Snap Share, 22 routes run, and a 27.2-percent Target Rate on six targets last week.

Tyler Bass is available in 46-percent of ESPN leagues, but that number should be 100-percent. Since the start of the second half of the season, Bass is the second-highest-scoring kicker. The Bills offense’s weighted DVOA is the fourth-highest in the league as well, indicating the efficiency of the offense. Depending on red-zone effectiveness, Bass will have scoring opportunities.

To have lineup-specific questions answered,