PlayerProfiler’s Player Popularity Index (PPI) tracks individual player profile page views over the past 30 days and ranks them accordingly. Each week, this article will highlight the five highest-ranked players and use our advanced stats and metrics to provide fantasy football insight on each. Following Sunday’s action and prior to Monday Night Football, the PPI pinpointed the following top-five trending players for Week 13: 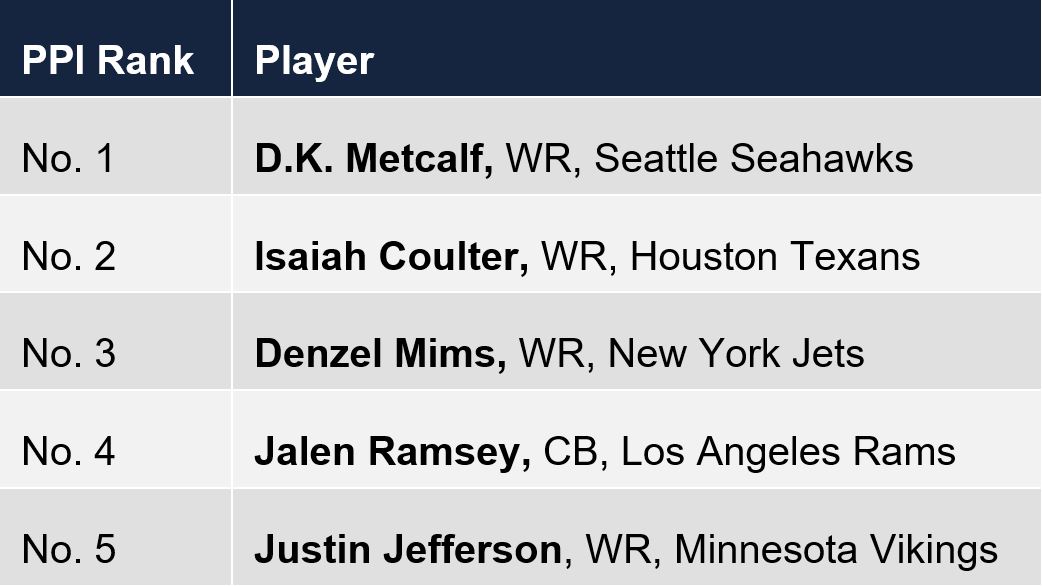 There Goes That Man, Metcalf

After a one-week hiatus from appearing in the PPI rankings after five consecutive showings, D.K. Metcalf returns with a bang to claim the top spot. While the Seahawks lost to the lowly Giants, Metcalf drew attention by making a splash play, which for him occurs on a weekly basis.

An expert at making defenders look silly, Metcalf made an example out of Giants cornerback James Bradberry. After burning Bradberry on a comeback route, a wide-open Metcalf made the catch and proceeded to stiff-arm him into oblivion. The video quickly went viral and caused fantasy gamers to flood Metcalf’s PlayerProfiler page.

Aside from the brutal stiff-arm, Metcalf led the Seahawks with 80 receiving yards but failed to find the end zone.

Fantasy Implications: Metcalf’s rise to No. 1 in PlayerProfiler’s dynasty wide receiver rankings makes him a challenging dynasty acquisition. In redraft, he projects to appear on league-winning squads in all formats and should be pursued aggressively via trade, even at a steep cost. Fantasy managers may need to make any offer a “Godfather” offer at this point.

Key Metrics: Through Week 12, Metcalf leads the league in Completed Air Yards with 763, and his 17.9 yards per receptions rank No. 6 among qualified wide receivers. His 112.1 Best Ball Points Added is the No. 3 mark.

Fantasy managers who spent their remaining FAAB on Texans wide receiver Isaiah Coulter faced a harsh reality this week. Houston made the rookie sixth-rounder from Rhode Island inactive for Sunday’s tilt against the Colts, rendering him useless for fantasy. With Will Fuller suspended for performance enhancing drugs and Randall Cobb (toe) going on injured reserve, Coulter figured to see an increased role.

Instead, that role went to 2017 fourth-round pick Chad Hansen. He caught 5-of-7 targets for 101 yards in his first game action since his rookie campaign, finishing second on the Texans in receiving behind Keke Coutee (8-141-0). Hansen saw one less target than Brandin Cooks, who had a quiet game (5-65-0).

Fantasy Implications: Hansen becomes an intriguing waiver wire target this week. Given his encouraging usage and the fact that no other Texans wide receiver outside of Hansen, Coutee and Cooks was targeted in Week 13, Hansen looks locked into the tertiary role. Coulter can be dropped in all but the deepest of redraft leagues, though he makes for a hold in dynasty.

Key Metrics: Hansen averaged 20.2 yards per reception on Sunday. His 10.87 Agility Score ranks in the 88th-percentile.

Mims Mum in Loss to Raiders

On a day that Sam Darnold attempted 23 passes and posted a 32.8 QBR, Denzel Mims garnered just three targets in Sunday’s loss to the Raiders. After trending up in recent weeks based on predictive Air Yards metrics, Mims failed to produce that breakout game fantasy managers yearn for.

Mims’ 38.6-percent Air Yards Share ranks No. 8 through Week 12. He saw eight targets in each of his past three games while racking up 428 Air Yards. But his volume bottomed out while Jamison Crowder led the Jets with a 5-47-2 line.

Fantasy Implications: Until Adam Gase disappears, Mims’ ceiling remains capped, but that makes him even more of a screaming buy-low in dynasty leagues based on his prospect profile. The second-round pick from Baylor possesses elite workout metrics and college production to match. Need more convincing? His Best Comparable Player is Chris Godwin.

Key Metrics: Mims’ 3.6 (No. 110) Target Quality Rating tells the story of a receiver who’s not getting much help from his quarterback. The metric, which combines Catchable Target Rate with Average Depth of Target, puts a premium on deep, catchable passes and discounts short, uncatchable throws. Looking at you Sam Darnold.

Ramsey Squares Off Against Hopkins

Jalen Ramsey’s entrance into the PPI rankings makes him the first defensive player to accomplish the feat. Against Houston, PlayerProfiler’s second-ranked cornerback faced a marquee matchup against old foe DeAndre Hopkins, and it didn’t disappoint. While Ramsey limited Hopkins, he couldn’t shut down Nuk, who notched a team-high eight catches for 52 yards and a TD.

Fantasy Implications: Ramsey and the Rams draw the Patriots in Week 14, so he won’t have to worry. New England averages the third-fewest passing yards per game (191.4) and doesn’t feature an alpha receiver. Gamers who roster Patriots wide receivers need to temper expectations and consider benching them. The Rams allow the fewest fantasy points to opposing receivers.

Key Metrics: Through Week 12, Ramsey averages 0.20 (No. 3) Fantasy Pts Allowed Per Cover Snap. He has allowed one (No. 5) TD this season while holding opposing receivers to 8.1 (No. 9) Fantasy Points per Game.

Justin Jefferson entered Week 13 leading all rookies with 918 receiving yards, the seventh-highest mark in the NFL. He kept up his torrid pace against Jacksonville, becoming the second Vikings rookie in history to eclipse 1,000 receiving yards. He joins elite company: none other than Hall of Famer Randy Moss did it in 1998 with 1,313 yards.

The rookie first-rounder from LSU led the Vikings by catching 9-of-12 targets for 121 yards and a score. It marked the third consecutive game that he found the end zone. He forms a formidable combination with teammate Adam Thielen. Both receivers rank in the top-10 in fantasy points at the position, with Jefferson coming in at No. 6 with 209.1 points, and Thielen No. 8 with 204.6 points.

Fantasy Implications: Joining CeeDee Lamb as the only rookies to make the top-10 in PlayerProfiler’s dynasty wide receiver rankings, Jefferson makes for a tough acquisition. But with Thielen playing in his age 30 season, he’s worth pursuing aggressively. Redraft gamers who claimed him off waivers enjoyed an enormous return on investment.

Key Metrics: The rookie shows impressive efficiency metrics. Through Week 12, Jefferson led all receivers with a 12.8 yards per target average. He also boasts a league second-best 2.89 Yards per Route Run average and the third-highest Production Premium, with a +43.4 mark.