Winning in fantasy football does require a dose of good luck. Whether it’s valued players falling in a draft or avoiding the injury bug, it’s nice to have that lady on your side. However, luck only goes so far. A key aspect to winning in fantasy is to make those less-than-obvious picks count. It doesn’t require a ton of brain power to draft Christian McCaffrey.

Derrius Guice, on the other hand, is a polarizing figure; an enigma. Detractors will point out his injury history and lack of meaningful production. Truthers will defend the talent that has yet to be unleashed. With his current FFPC ADP of pick No. 75.19 landing him in the seventh-round, it’s fair to question if Guice is worth the investment. PlayerProfiler’s advanced stats and metrics help reveal the answers behind this puzzling running back.

Upon first glance, there is plenty to appreciate about the Derrius Guice profile. At 5-11 and 224-pounds, he’s a formidable force on the field. Though he didn’t participate in burst or agility drills at the 2018 NFL Combine, he registered a 4.49 (80th-percentile among qualified running backs) 40-Yard Dash, giving him a 110.2 (91st-percentile) Speed Score. His Best Comparable Player? Oh, it’s just Ezekiel Elliott.

Once Leonard Fournette left LSU for the NFL, Guice recorded back to back 1,000 yard seasons with double digit touchdowns for the Tigers. In 2017, his senior season, he caught 18 of 22 targets for 124 yards. With his 32.2-percent (73rd-percentile) College Dominator Rating and 6.4 (82nd-percentile) College YPC, there is plenty to appreciate about his athletic profile.

The big strike against Derrius Guice is his health; a true concern given the history. During his first preseason in 2018, he tore his left ACL and was sidelined the entire year. Additionally, he suffered a meniscus tear in the same knee in 2019, missing nine games due to surgery. He returned after rehabilitation, but finished the season on Injured Reserve after spraining the MCL in his repaired knee during Week 14. 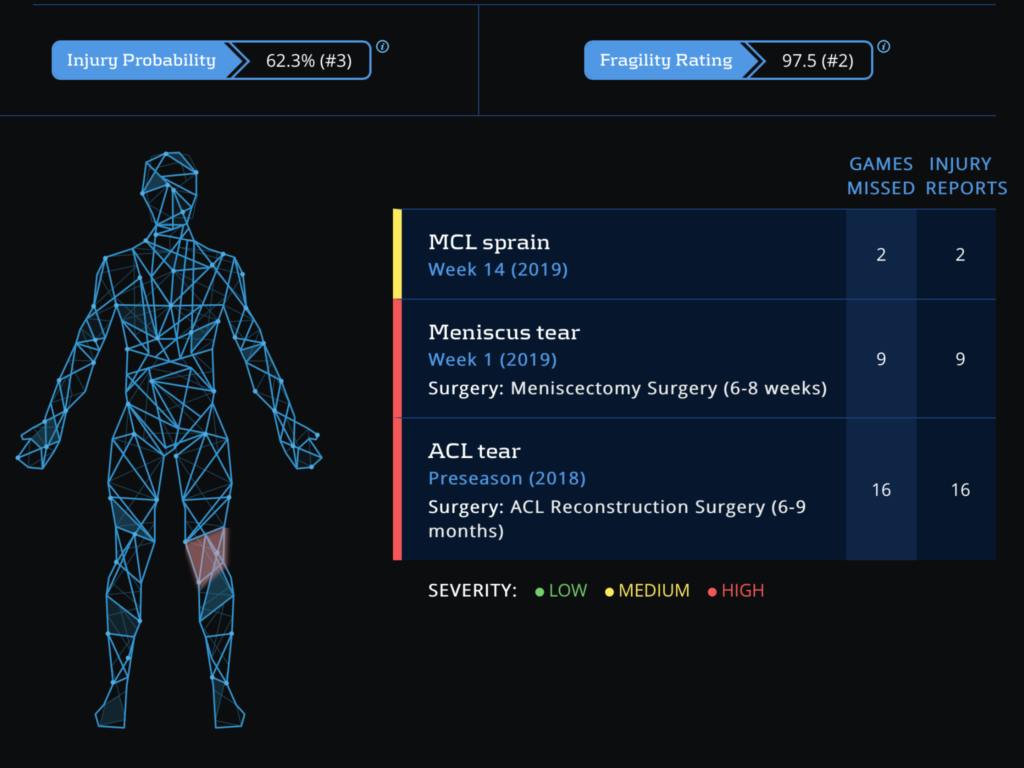 The injuries Guice has sustained through the first two years of his NFL career leave many wondering if he can stay on the field. Of particular concern, is the injuries all occurring to the left knee. With a 62.3-percent (No. 3) Injury Probability Rating and and a 97.5-percent Fragility Rating, there’s little denying Guice comes with risk. The additional injuries he suffered may have increased concern, but aren’t uncommon to have after an ACL tear. This is due to the lack of a “normal” ACL, which leads to chronic changes in the knee and increased force on cartilage and other structures; the meniscus, in particular. More concerning is the possibility of arthritis playing a factor, as seen with star running back Todd Gurley.

There is plenty of good news for Guice fans, however. Modern medicine is rapidly improving, and an ACL injury isn’t the death knell it once was. Rehabilitation processes are evolving to provide optimal recovery, with 90-percent of athletes returning to their pre-injury level of activity. At age 23, Guice also has youth on his side. Should he stay true to his rehab program, he’ll have the chance to prove his injuries were mere fluke, not a sign of things to come.

A Force on the Field

Many will remember Derrius Guice‘s big preseason run from 2018, in which he also tore his ACL. The play is a parallel of his career as a whole; the talent undeniable, the durability a question. While the focus has been on the injury history, it’s important not to ignore what he can be. The athleticism and college production are there, but what has he done on an NFL field when he’s had the chance?

While the five games he played in 2019 are a small sample size, his efficiency is impressive. He averaged 3.3 (No. 2) Yards Created Per Touch and posted a +38.7 (No. 2) Production Premium, also boasting a 70.0-percent Catch Rate. Not to mention, Adrian Peterson ran strong last season, leaving Guice with a 33.7-percent (No. 59) Snap Share and 36.9-percent (No. 43) Opportunity Share. With health will come opportunity.

The debate on Derrius Guice will rage on for the time being. The start of the season is approaching, as is his opportunity. The third year pro’s ADP has been on the rise with fantasy gamers coming to realize the potential. Even so, he is well worth the risk at his price, and a breakout season is coming. In conclusion, the time to take the chance is now. Here’s to Lady Luck making her peace with Guice in 2020.