For years, the ability to accurately judge who were the best cornerbacks in the NFL was not a skill that everyone possessed. At least not in ways that were easy to quantify with statistics. In the old days, you “knew” a player was a great cornerback because teams would not throw passes anywhere near his general direction. But this “knowing” is unquantifiable. We want actionable data, and this is not actionable data.

Thankfully, we are closer to the truth thanks to another of the advanced metrics we have here at The Underworld, namely Coverage Rating. This is the latest subject in our Meet the Metric series.

Put simply, Coverage Rating is an efficiency metric incorporating Target Rate, Pass Break-Ups, Catch Rate Allowed, and Fantasy Points Allowed Per Snap. Put even more simply, we can measure cornerbacks and find those that will offer opposing wide receivers virtually nothing on a given Sunday. We can judge them on a target-by-target basis since bad corners will be targeted frequently by definition, while good corners will be attacked with more circumspection.

Taking all these factors into account allows us to move away from the gross oversimplification that a single metric could lead to. Take Target Rate, for instance. Let’s look at the rate a cornerback was targeted and assume that a player drawing a large number of targets was bad. We would see that Chauncey Gardner-Johnson was targeted at a rate of 25.4 percent in 2020, No. 5 among qualified cornerbacks. If teams are looking for a player on a quarter of their passing plays, he must be ripe for the picking, right? Then explain why Gardner-Johnson was No. 10 in Coverage Rating? 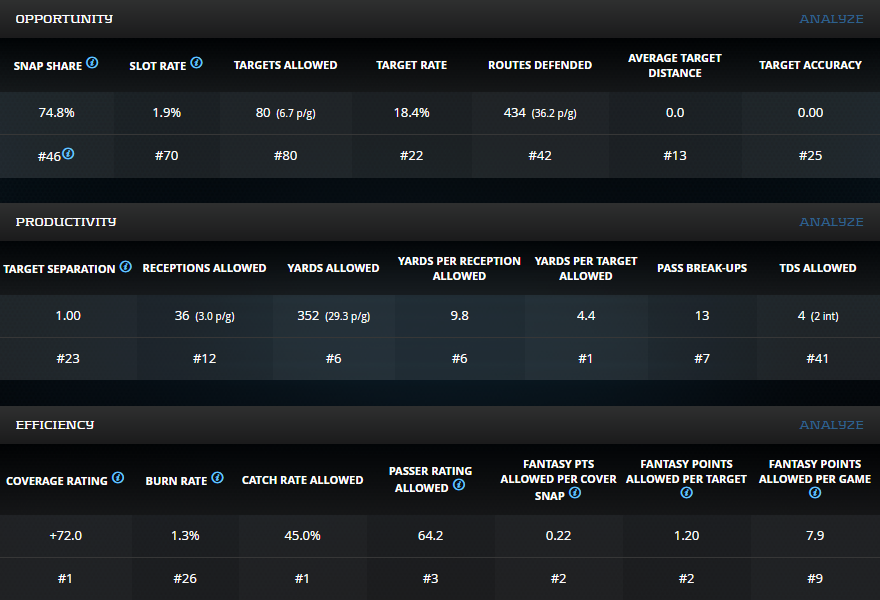 Let’s take another example. Cleveland Browns cornerback Denzel Ward drew 80 (No. 80) targets in the 2020 season. Bengals cornerback LeShaun Sims, a lesser-known player than Ward, drew just 78 (No. 78) looks in 13 games. Sims was targeted on a similar scale to Ward. Therefore, these players are close in production, right? 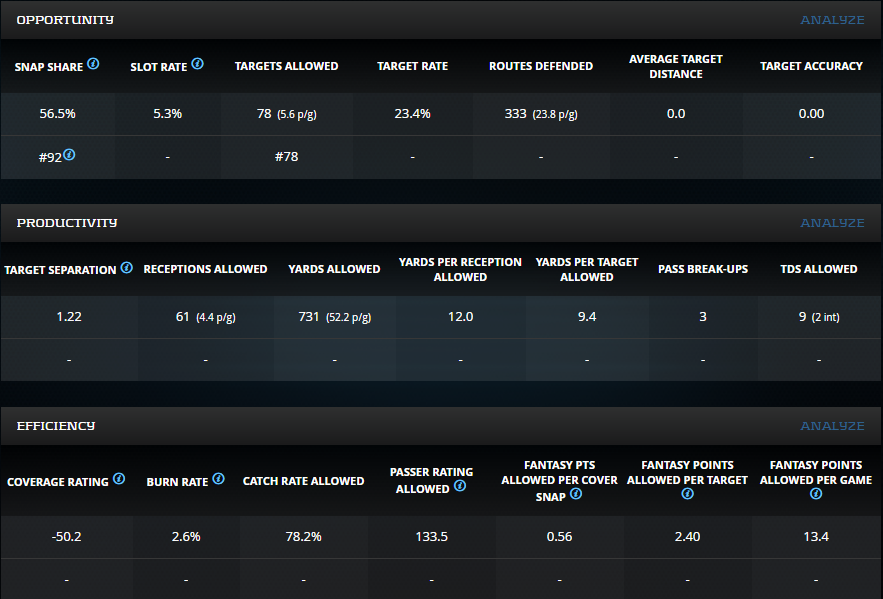 Why, hello there Mr. Strawman. Coverage Rating points out that this could not be further from the truth. Ward led all qualified cornerbacks with a +72.0 Coverage Rating. Of the 93 cornerbacks to draw at least 50 targets, Sims ranked No. 93 with -50.2 mark. Ward had 13 (No. 7) Pass Break-Ups, 45.0-percent of his targets were completed (No. 1), and he averaged 0.22 (No. 1) Fantasy Points Allowed per Cover Snap (tied with Jalen Ramsey and Bashaud Breeland). And Sims? Three Pass Break-Ups, a 78.2-percent Catch Rate Allowed, and 0.56 Fantasy Points Allowed per Cover Snap.

The Top Guns and the Lions Sleeping Tonight

Cornerbacks with elite Coverage Ratings are the spoilsport of fantasy football. We don’t want to go into a weekly matchup knowing that our WR1 is up against one of these erasers. That is why, as much as we respect them (especially if they play for our favorite team), these players drive us to distraction through a fantasy lens. 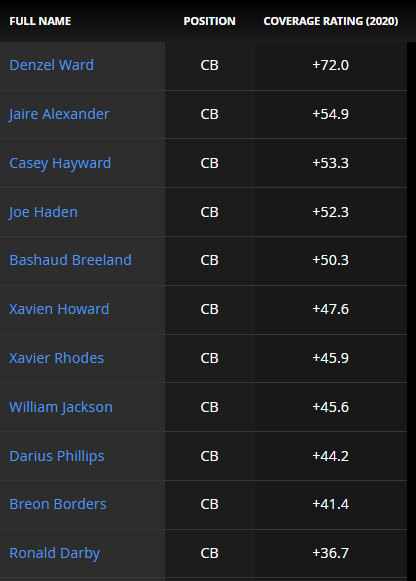 At the other end of the scale, the Detroit Lions will no doubt be hoping for more from Jeff Okudah in his second season. Fantasy owners will be hoping for more of the same. The Lions traded away Darius Slay in the hopes of sliding Okudah seamlessly into his spot in the defensive backfield. This hasn’t worked so far. Okudah only played nine games as a rookie. But he was targeted at a 24.8-percent (No. 6) rate. Passers completed 74.2-percent of their passes looking his way. The next pass he breaks up will be his first as a pro. Only the aforementioned LeShaun Sims posted a lower Coverage Rating than Okudah’s -29.7 showing.

Coverage Rating is a vital metric that the astute fantasy manager should be aware of heading into any weekly matchup.