Free square running backs refer to RBs that come in severely underpriced relative to their projected roles. These players are often priced at the stone-minimum, opening up the DFS slate to jam in the premium plays. DraftKings has raised the salary floor for running backs this season from $3000 to $4000, so spotting these freebies is paramount if we want to afford the high-floor, high-upside smash plays. Using PlayerProfiler’s advanced stats, metrics, and analytics, we can identify RBs that fit the criteria. Here are the free square RBs for the NFL Week 13 DFS main slate.

The game finally slowed down for Jonathan Taylor in Week 11, who logged his best yardage day since Week 6 against the Bengals. The rookie RB handled 22 carries for 90 yards and added four receptions for another 24 yards. His 26 touches were the second-most of the season, indicating that the Colts offense is finally trusting him to handle the workload he was drafted for. Taylor landed on the COVID list in Week 12, giving Nyheim Hines the starting nod, but Hines has averaged just 2.9 and 0.3 yards per carry in his last two games. In their last game together, Taylor saw 22 carries to Hines’ six and four catches to his three. It is clear he has taken over as the featured back and he should dominate when the Colts see positive Game Script.

With the Colts being 3.5-point favorites over the Texans this week, Taylor is set up for another 20 touches. His matchup and game environment are also excellent. This game has a 51-point total, which is the third-highest on the slate. The Texans also rank No. 27 in Defensive Rushing DVOA and have allowed the most rushing yards and touchdowns to RBs this season. They have also allowed the most open field yards per carry, according to Football Outsiders. That suits Taylor quite well given his 121.7 (99th-percentile among qualified running backs) Speed Score.

Taylor has flashed receiving talent all season, logging zero drops on 28 targets. He also ranks No. 5 or better in Yards per Reception, Yards per Route Run, and Catch Rate. He has caught at least two balls in all but two games this season, boosting his floor and making him a viable play in cash lineups. This is the eruption spot we’ve been waiting for.

DK must have gone to bed early Sunday night, leaving David Montgomery’s price at $5500 this week. He posted his best game of the season in Week 12, totaling 143 yards on 16 touches. He also found the end zone, giving him a 28.3 DK fantasy point total. Montgomery is now at his second-lowest price of the season and has a soft matchup against Detroit.

With a 44-point total, this game doesn’t project for many touchdowns. The good news is that the Lions have allowed 21 total touchdowns to RBs this season, easily the most in the NFL. They’ve had an RB score a TD on them in all but two games and they’ve allowed multiple scores in six. While their pass defense isn’t scaring anyone, featured RBs are the ones racking up the points on them this season. Even if the Bears only score three touchdowns, there’s a good chance Montgomery is getting one. 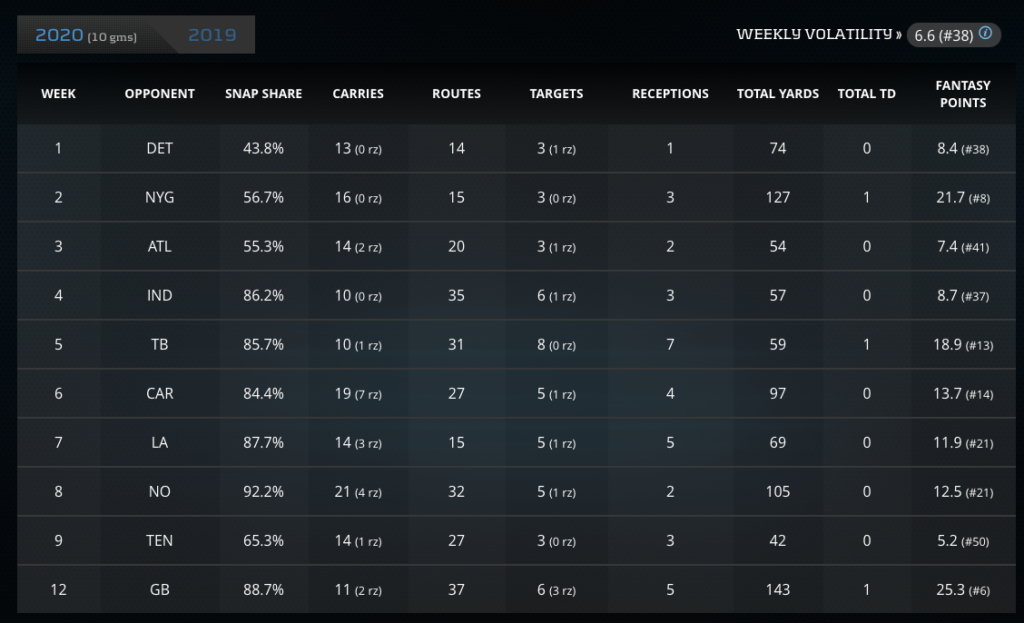 Montgomery has also been fed since Tarik Cohen’s season-ending ACL tear. He now ranks No. 12 with 142 carries, No. 6 with 47 targets, and No. 9 with a 70.3-percent Opportunity Share. He’s also played at least 80-percent of the snaps and seen at least five targets in every game without Cohen, excluding Week 9 where he suffered a concussion. The Bears clearly aren’t interested in featuring Ryan Nall or Cordarrelle Patterson. Montgomery is a high-floor RB in a smash spot. When factoring in his price, he looks like one of the best RB values on the slate.

The corpse of Frank Gore is still DFS viable in the year 2020. Since Lamical Perine left early in Week 11, Gore has amassed 33 carries and caught all five of his targets for 157 total yards and one score. He’s also handled nine red zone carries and seen one target in scoring position, giving him solid touchdown equity despite only having a 20-point implied team total. While that doesn’t point to tournament-winning upside, that is solid usage for an RB under $4500. 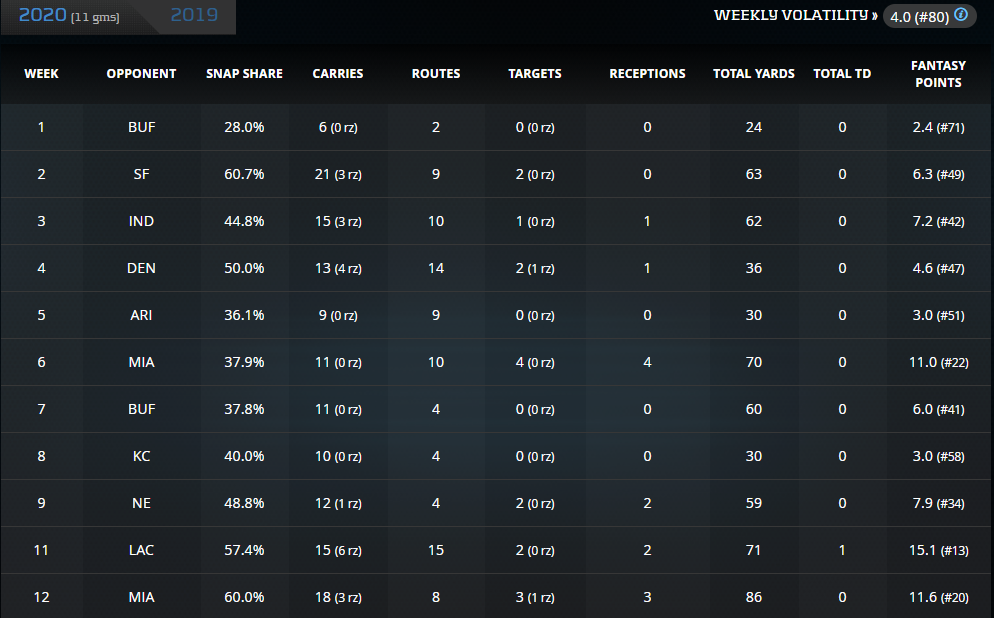 Gore’s strong usage should continue at home against the Raiders this week. While the Jets are 7.5-point underdogs, Las Vegas was just blown out by the Atlanta Falcons of all teams. They also rank No. 30 in Defensive Rushing DVOA, so New York’s best chance is pounding Gore up the middle and limiting Sam Darnold’s wild tendencies. The third-year QB actually ranks No. 11 in Danger Plays on the season despite only playing in seven games.

The Raiders play at a slow pace and try to dominate time of possession, but his usage in the last few weeks points to steady production. If you’re looking to punt an RB and afford Dalvin Cook and Derrick Henry in the same lineup this week, Gore offers a solid floor.