Maximizing your fantasy points per salary dollar is the key to cashing in DFS. If you want to afford the best cash plays on the slate, dumpster diving for underpriced value plays is the way to go. With multiple injuries already shaking up some projected workloads, there is plenty of value on the DFS main slate. Here are the best DFS Flex values for Week 5 based on PlayerProfiler’s advanced stats, metrics, and analytics.

Ezekiel Elliott, Clyde Edwards-Helaire, and Mike Davis are all in smash spots and project for massive ownership. While most cash lineups will jam those three in and make up for the salary elsewhere, there isn’t much easy value at WR this week. That makes fading one and pivoting to a lower-priced and lower-rostered RB extremely viable. David Johnson is that RB.

Despite facing a gauntlet of the Chiefs, Ravens, Steelers, and Vikings, Johnson has managed to post RB2 numbers. Now finally in a soft matchup with the Jaguars, he is the quintessential free square RB for Week 5. The Jags were gashed by Joe Mixon for 181 total yards and three touchdowns, now ranking No. 17 in Defensive Rushing DVOA and No. 32 against the pass. The Texans will be able to move the ball into scoring position with ease and Johnson will have ample red zone opportunity. That will be a massive boost to his fantasy appeal.

DraftKings just fooking daring us to play David Johnson ($5,200) at home vs the Jaguars lmao pic.twitter.com/0Bx7OpD7ri

Through four weeks, Johnson has logged an 83.7-percent (No. 3 among qualified running backs) Snap Share and has commanded a 79.3-percent (No. 6) Opportunity Share. Despite that, he only has six (No. 42) Red Zone Touches. On top of his usual healthy dose of touches, Johnson has multi-touchdown upside against this deteriorating defense.

There isn’t much WR value on DK these days because FD has much softer pricing, but Darius Slayton fits the bill. The Giants have arguably the worst offense in the NFL, at least in terms of their production. They have only scored three touchdowns on the season, two of which went to Slayton in Week 1. Granted, they have faced the most brutal schedule to start the season with matchups against the Steelers, Bears, 49ers, and Rams. Thankfully, their luck is beginning to turn.

New York finally has a date with the fruitful Dallas defense. The Cowboys rank No. 25 in Defensive Passing DVOA, allowing the most touchdowns and second-most fantasy points to receivers. Their aggressive offense also allows for the perfect game flow, with opposing teams averaging 71.75 plays per game against them. This sets up perfectly for Slayton, who boasts a 63.3-percent (No. 3) Dominator Rating. While his 20.4-percent (No. 28) Target Share is modest, he ranks No. 4 with six Red Zone Targets and No. 11 with a 36.5-percent Air Yards Share. He is clearly their best player, and the Giants are trying to get the ball in his hands in high-leverage situations.

This role is ideal for a player of Slayton’s athleticism. His 4.39 (95th-percentile) 40-yard dash makes him a prototypical deep threat and his 10.32 (95th-percentile) Catch Radius supports his domination of red zone targets. This will be his best matchup of the season and he has the usage to post ridiculous numbers this week. He will be a popular cheap option for cash lineups.

Brandin Cooks failed everyone last week with a goose egg in a game where Deshaun Watson threw the ball 34 times. Cooks saw three of those looks with 32 Air Yards, but simply couldn’t put anything in the box score. The bright side is that he played 93.3-percent of the snaps and has played more than 90-percent in every game that he’s been healthy this season. His floor is nonexistent, making him impossible to play in cash lineups, but recency bias makes him an intriguing tournament play.

Cooks should carry minimal ownership and is in the softest possible matchup. The Jaguars rank dead-last in Defensive Passing DVOA and rank No. 29 in adjusted sack rate on Football Outsiders. That will give Watson ample time to navigate the pocket and find his receivers deep. Cooks may be washed, but he’s still damn close to his 4.33 (99th-percentile) 40-yard dash time. He’ll be matched up with Tre Herndon, who runs a 4.52 (49th-percentile) 40-yard dash and ranks No. 57 in PlayerProfiler’s cornerback rankings. Cooks only needs one deep ball to pay off his cheap salary on both DFS sites.

Assuming Julio Jones doesn’t suit up this week, Olamide Zaccheaus is a viable option at the stone-minimum price on DK this week. Zaccheaus may be chalky considering he posted eight receptions for 86 yards in a primetime spotlight last Monday night, but he is still a viable option for both cash and tournament lineups. This matchup with the Panthers should be shootout material considering these teams combine for the third-most plays per game on this slate. This game has the slate’s third-highest total at 53.5 points, and the Falcons are a minor favorite (-1), meaning we should see neutral Game Script for both teams throughout.

Zaccheaus is also more than just a body running routes out there. While he stands 5-8, he has an above-average 40-yard dash, Burst Score, and Agility Score. He was also impressive in his college days at Virginia, posting a 36.5-percent (72nd-percentile) College Dominator Rating with a 34.1-percent (94th-percentile) College Target Share. After producing in a tough matchup with Kevin King last week, Zaccheaus is in a great spot against a Carolina secondary that ranks No. 26 in Defensive Passing DVOA.

The Cowboys have been the best source of fantasy points on both sides of the ball, so it makes sense to pick multiple value plays from this same game. Evan Engram will also clock in with significantly lower ownership than the field. The TE position has been absolutely brutal, with the cheap options constantly busting and the high-priced ones off the main slate for much of the season. Now that both Travis Kelce and George Kittle are healthy and on the main slate, they will carry heavy ownership. Engram is set up better than both of them, facing the No. 25-ranked pass defense while dominating targets. 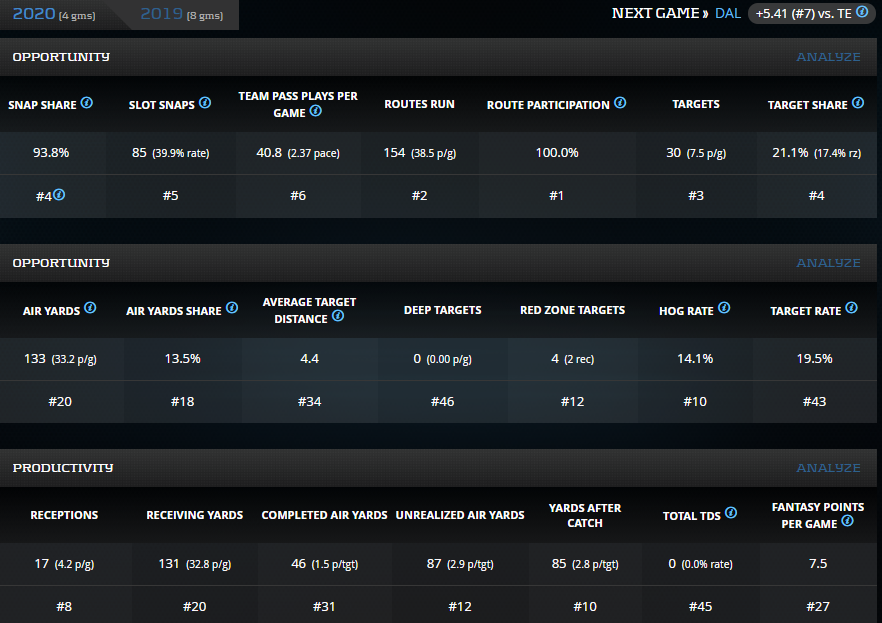 Engram has drawn 30 (No. 3) targets through four games and is also working from the slot at a 39.9-percent (No. 6) rate. His abysmal 4.4 (No. 34) Average Target Distance has held back his freakish athleticism, but he should be unleashed this week. Dallas has allowed the sixth-most receptions and 10th-most receiving yards to TEs this year despite only facing Austin Hooper, Greg Olsen, Hayden Hurst, and Tyler Higbee. Engram is easily the most talented one they will face and the volume will be there.