The Weighted Opportunities DFS Value Index identifies undervalued running backs in daily fantasy. Each week, we will compare Weighted Opportunities Per Game and Opportunity Shares against FanDuel salaries at the running back position. Slight adjustments will be made to the final ranking to account for projected personnel changes, matchups, Game Script, and other information the value metric cannot capture on its own. The focus will be on players at or under $6,500 salary on FanDuel. The best lineups can and should be based around the true workhorse RBs, but these value plays can be useful to differentiate GPP lineups or find sneaky values in cash.

The column got off to a great start in Week 4, with Kareem Hunt, Devin Singletary, Mike Davis, Antonio Gibson, and Latavius Murray all exceeding value. Joshua Kelley only scored 2.8 Half PPR points despite Austin Ekeler’s injury. Adrian Peterson, David Montgomery, and J.D. McKissic were serviceable, but not good enough to make a difference in our lineups. On to Week 5!

Devonta Freeman is the number one hold-your-nose pick this week. He is an unexciting play that can still reap a reward. His 48.8-percent (No. 27 among qualified running backs) Opportunity Share is what we look for in a cheap value play. The Giants have provided limited touches for their running backs and the offense looks terrible in general, but a matchup against the hapless Cowboys defense may be the cure they need. Freeman is the most likely RB to benefit if the Giants score more than expected.

Antonio Gibson still has not gotten enough respect in his pricing. He showcased his upside last week by amassing 128 yards and a touchdown on 17 touches. The issue is that he still only sports a 45.4-percent (No. 33) Snap Share and 48.3-percent (No. 28) Opportunity Share on the year.

If Gibson keeps making explosive plays, Ron Rivera will have no choice but to give him more snaps and touches for a Washington team that is desperate for playmakers. It’s hard to say when his ascension will truly begin, but he still has value at $5,800 with his current average of 11.3 (No. 30) Weighted Opportunities Per Game.

While the case for David Johnson is all about sustainable workload and production reliability, the case for Duke Johnson is more of a narrative. Numbers can’t always tell us the whole story. Bill O’Brien was desperate to make David a workhorse after grossly overpaying for him. Now that O’Brien is gone, the interim coaching staff has no obligation to prove the validity of his boneheaded trade. There is a chance that Duke’s potential is finally realized (editors note: we really mean it this time). He was a workhorse in college at Miami and has been efficient on his touches in both Houston and Cleveland across his NFL career. A longshot play in a good matchup, Duke is a great value at his minimal price.

Kenyan Drake has not started the year the way most fantasy players had hoped. He has not come even close to living up to his early round draft capital. Thankfully for DFS, we only need to consider his salary and potential for this week. He sits at $6,200 this week, a reasonable price for a guy who is still seeing most of the workload in Arizona. Chase Edmonds is a factor, but his two touchdowns belie the fact that Drake has 12 (No. 16) Red Zone Touches to 8 (No. 34) for Edmonds. Drake’s lack of targets is the largest concern, but that seems to be priced in at this point. He has high touchdown upside in a game Arizona should win comfortably against the Jets.

The main concern with Malcolm Brown is the return of Cam Akers. The rookie can and should command work after returning from a rib injury, but Brown and Darrell Henderson should still be heavily involved. In a game against the Washington Football Team and their newly minted starting quarterback Kyle Allen, the Rams may garner such a large lead that all three backs have potential value. Akers will likely be kept on limited reps, meaning that the plodding Brown can end up with a high workload in a lopsided affair. It’s a sneaky upside play when Brown may be among the lowest owned players in daily fantasy.

The case for David Johnson is simple. He ranks No. 1 in Opportunity Share among this group and ranks in the top five in Weighted Opportunities Per Game. For the first four weeks, he has been used as a workhorse back. The question is whether that continues now that Bill O’Brien is out of the picture. Regardless, past workload is the best indicator of future workload.

In a potential shootout with the Jaguars, the Texans are projected for just under 29 points on most books. If that point total ends up being relatively accurate, Johnson will be a solid value play.

There are two worries driving down Melvin Gordon’s price. First, Phillip Lindsay‘s return should reduce his workload. Lindsay will certainly eat into Gordon’s volume, especially on the ground. The second issue is a tough matchup against the New England Patriots where Brett Rypien is likely to be the starter for the Broncos. It is not an ideal situation, but the poor Game Script can work in Gordon’s favor.

Despite Gordon being a larger back than Lindsay, he has the more robust receiving profile across his NFL career. The low game total limits the upside here, but Gordon is a good cash play to lock in touches.

Zack Moss should return this week, but that still should not scare daily fantasy gamers from returning to Devin Singletary. The Bills offense has been clicking on all cylinders and will look to continue their success against the Titans. Singletary will likely split the ground work and goal line duties with Moss, but gets his real value from his usage in the passing game. He ranks No. 5 among all RBs with 21 targets and No. 7 at the position with a 14.6-percent Target Share. If Buffalo’s offensive prowess and Singletary’s passing usage continues, he will likely be priced out of the Value Index as soon as next week. Get him at value while you can.

Myles Gaskin fell back to earth a bit in Week 4 after looking like a stud in Week 3’s game against Jacksonville. Part of his performance can be attributed to the excellent middle linebacker coverage in Seattle that often limits the receiving upside of RBs and TEs that face them. Still, Gaskin saw 10 of the 16 RB carries and four of eight targets at the position. 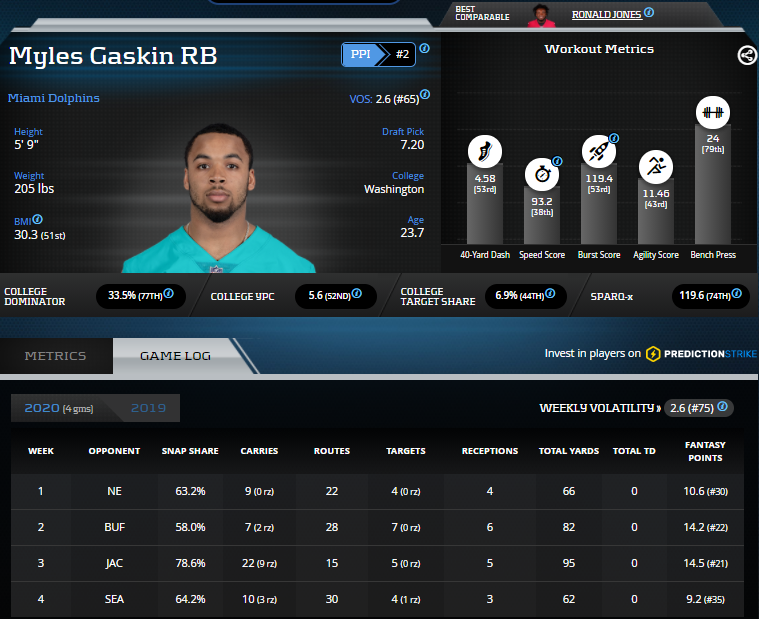 With excellent overall usage at only $5,500, Gaskin is a great contrarian play in cash or GPP in another tough matchup against the 49ers.

Damien Harris should be the free chalk play of the week. Monitor his ownership and pivot if it gets too high, but it is rare to see a back priced at only $4,500 when he’s projected for about half his team’s opportunities.

Harris looked awesome on Monday Night Football against the Chiefs and now gets a plus Game Script matchup against the Broncos. Belichick’s RB shenanigans rightfully cause concern, but the upside with Harris is too tantalizing.