This weekly series covers several cost-efficient wide receivers who provide massive upside for GPP tournament lineups. These are typically wideouts with high volatility in a pass-heavy environment in a game projected to produce a lot of points. We’ll use advanced stats and metrics from the PlayerProfiler Data Analysis Tool to identify each player.

After all these years of disappointment, Corey Davis is actually happening. So, 2020. Davis had his best performance to date in Week 13, with 11 receptions on 12 targets for 182 yards and a touchdown. He ran a season-high 40 routes and finished as the WR1. Ryan Tannehill targeted him downfield as the two connected for six completions of 15 yards or more, including a 43-yarder.

Davis has emerged as a big-play threat for the Titans alongside top wideout A.J. Brown. Davis ranks No. 4 among qualified wide receivers with 11.4 Yards Per Target, while averaging 2.88 (No. 2) Yards Per Route Run with a 33.1-percent (No. 19) Air Yards Share. His floor has proven solid, too. Davis has topped 65 yards in each of his last four outings. This week’s game has the second-highest over/under of the week, providing plenty of opportunity for another trip to the end zone against a Jaguars team that has allowed the fifth-most Fantasy Points per Game to wide receivers. At just $5,700 we can’t pass up the upside.

Rookie Brandon Aiyuk caught five of nine targets for 95 yards and a touchdown in the 49ers’ loss to the Bills on Monday night. It was Aiyuk’s first game back since testing positive for COVID-19. But that didn’t stop him from leading the team in receiving yards and tying Deebo Samuel for the most targets. Aiyuk is seeing valuable looks in the San Francisco offense with a 30.8-percent (No. 28) Air Yards Share and 13 (No. 9) Red Zone Targets. He hasn’t seen fewer than 85 Air Yards since Week 6, which was the last time he finished outside the top-20 WRs in PPR scoring. In fact, the only wide receivers who have scored more Fantasy Points per Game since Week 8 are Tyreek Hill and Davante Adams. And yet, somehow Aiyuk is still priced at just $5,400 for this Week 14 matchup with Washington.

Will Fuller‘s suspension, coupled with Kenny Stills‘ release and Randall Cobb‘s absence due to a foot injury, unlocked third-year wide receiver Keke Coutee. He finished as the WR8 in Week 13 with eight receptions for a career-high 141 yards. Coutee led the Texans in targets, receptions, and receiving yards. His early 64-yard catch early in the contest gave us a glimpse of his 4.43 (86th-percentile) speed. He ran 41 routes while accounting for 82.5-percent of the snaps. 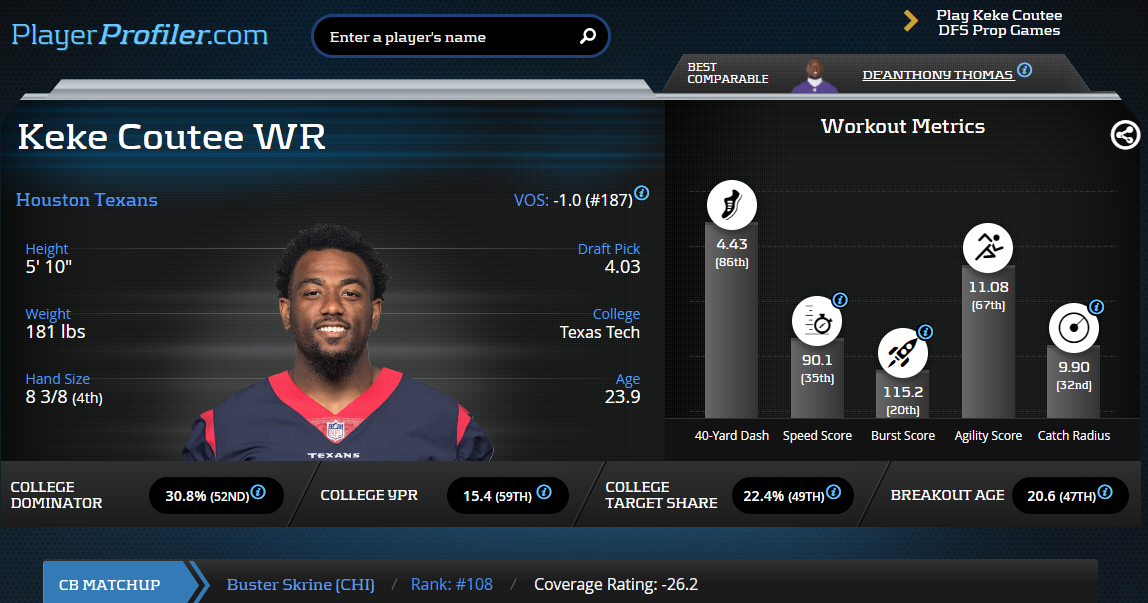 The depleted Texans wide receiver corps ensures Coutee will continue to be the recipient of a high Target Share over the next few weeks. His knack for explosive plays makes him a great play at $5,000, even in a matchup with the Bears.