PlayerProfiler’s Player Popularity Index (PPI) tracks individual player profile page views over the past 30 days and ranks them accordingly. Each week, this article will highlight the five highest-ranked players and use our advanced stats and metrics to provide fantasy football insight on each. Following Sunday’s action and prior to Monday Night Football, the PPI pinpointed the following top-five trending players for Week 6: 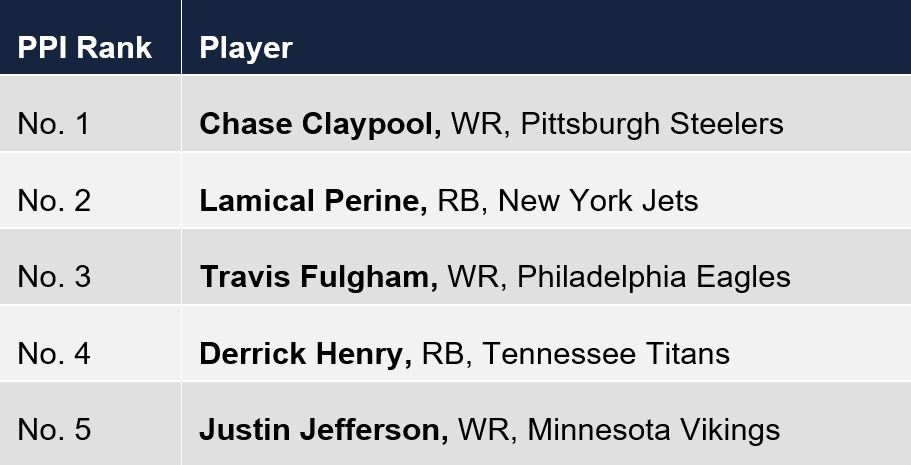 Chase Claypool’s rapid rise among a stacked 2020 receiving class includes eye-popping production and advanced metrics. At 6-4, 238-pounds with 4.42 speed and a 131.9 (92nd-percentile among qualified wide receivers) Burst Score, he’s a threat to score on any given play. Following another solid outing in Week 6 with 4-74-0 receiving and 2-7-1 rushing, he ranked No. 1 in the PPI for the allotted time period.

Claypool has displayed the ability to generate yards after the catch and presents a mismatch for defenders, who give him an Average Cushion of 5.04 (No. 6) yards. He vaulted himself into the No. 2 WR role for the Steelers and leapfrogged teammate Diontae Johnson in PlayerProfiler’s dynasty rankings. Though his rushing volume is low, the Steelers giving him goal-line carries raises his weekly ceiling at James Conner‘s expense.

claypool’s 3.69 fantasy points per target is no. 1 among qualified nfl wrs. pic.twitter.com/eomhLmbQU2

Claypool’s buy high window remains open a crack, but gamers looking for an edge can wait until a dip in his production to target him. He’s rostered in the majority of redraft leagues, but is a screaming add if available. Given his extreme fantasy scoring fluctuation, Johnson’s expected return, and a tough matchup against Tennessee, he offers another potential DFS play in Week 7. His breakout further shines a light on the struggles of JuJu Smith-Schuster, who managed two catches for six yards against Cleveland. His future in Pittsburgh remains murky at best.

Key Metrics: Through Week 5, Claypool’s elite +55.8 Production Premium ranked No. 1 among all qualified receivers. In addition, he leads all rookies during that same timeframe with 17.6 Fantasy Points per Game and five total TDs, also ranking No. 2 with 128 Yards After Catch and 20.1 Yards per Reception.

The Jets offense stinks and their O-line follows suit. Still, Lamical Perine offers an intriguing dynasty waiver wire pickup or buy-low opportunity. Pass on him in redraft in all but the deepest of leagues, and fade in DFS until his role becomes more clear. Certain factors need to fall in Perine’s favor for him to become fantasy relevant, so he’s more of a slow play asset.

The Jets, as they are wont to do under the futile coaching of Adam Gase, still believe in giving old guy Frank Gore work. Still, given the Week 6 usage patterns, Perine figures to see the lion’s share of touches moving forward and the opportunity to cement his role for 2021.

didn't take long for lamical perine to become the lead back in new york (whatever that's worth).

Sam Darnold‘s potential return from a shoulder injury, Jeff Smith‘s emergence, and Denzel Mims’ activation from IR should bolster the offense as a whole. A best-case scenario for Perine: the Jets fire Gase and the interim coach moves away from Gore.

Key Metrics: Perine’s 11.8-percent College Target Share ranks in the 84th-percentile. The fourth-rounder from Florida caught 40 of 55 passes for 262 yards and five TDs in his senior season. His passing game usage figures to play a big factor in his overall success at the NFL level.

Travis Fulgham knows how to make an entrance. After missing the first three games of the season, he’s scored a TD and recorded at least 50 receiving yards in each of his first three outings.

It’s not hard to envision the second-year receiver from Old Dominion as part of Philadelphia’s long term plans. His potential to form a potent 1-2 punch on the outside with rookie Jalen Reagor cannot be ignored. He’s averaged a 24.3-percent Target Share and racked up 279 receiving yards to date.

Key Metrics: Through his first two games, Fulgham averaged a robust 3.80 (No. 1) Yards Per Route Run. He’s also earned a big chunk of the team’s Air Yards Share, and Carson Wentz posted a 156.2 QB Rating (No. 4) when targeting Fulgham in Weeks 4-5. His 31.2 fantasy points in Week 5 ranked No. 2 among wide receivers, and his 19.5 fantasy points against the Ravens in Week 6 ranked ninth.

Derrick Henry remains the king of stiff arms and 90-plus yard TD runs. His embarrassment of Josh Norman and a 94-yard scoring run highlighted his 22-212-2 performance against the Texans. That made him the first player in league history to post three consecutive seasons with 200-plus rushing yards in a game. He previously tied Hall-of-Famer Tony Dorsett for the longest run from scrimmage in history (99 yards) in 2018.

Contending dynasty squads should try to take advantage of Henry’s age (26.8) and ranking outside the top-12 dynasty RBs to try and acquire him. With Tennessee running the ball at the third-highest clip in the league, Henry is locked in as an every-week start in all seasonal formats. With the Titans facing the Steelers in Week 7, keep an eye on his DFS rostership for a potential leverage spot.

Key Metrics: According to NFL Next Gen Stats, Henry reached a top speed of 21.62 mph on his long run against Houston. It marked the fastest speed reached by a ball carrier in Week 6 through Sunday’s games. That’s thanks to his 116.3 (97th-percentile) Speed Score. Through Week 5, despite the Titans having played four games, Henry had logged 29 (No. 1) Red Zone Touches and seven (No. 3) Goal Line Carries.

Jefferson Moving On Up

Justin Jefferson showed off his efficiency despite suboptimal quarterback play from Kirk Cousins. However, his ascension to Minnesota’s No. 1 receiver chair hasn’t completely materialized. Teammate Adam Thielen owns a higher Target Share (33.1-percent to 18.8-percent), more Red Zone Targets (7-1) and more Deep Targets (12-4) through Week 5. However, the rookie leads the team with 537 receiving yards while averaging 19.2 yards per reception compared to Thielen’s 13.0 mark. Both he and Thielen currently rank among the top-5 in fantasy scoring at the position.

since becoming the the full-time starter in week 3, justin jefferson is averaging:
*54 snaps per game
*32 routes
*8 targets
*22.4 fantasy points

jefferson's fantasy output is no. 1 among wrs over that span. thielen is no. 5.

kirk cousins is no. 17 among qbs over the same span. pic.twitter.com/BNvaqELlsu

Key Metrics: Jefferson’s efficiency metrics stand out for a rookie. Through Week 5, he ranked inside the top-10 in yards per reception and Yards Per Route Run, and his 95-percent True Catch Rate ranked No. 13.