What a year! 2020 has been one of the wildest seasons of football yet. However, the end of the regular season in fantasy is upon us (well, for most leagues), and as Coach Belichick would say, “We’re on to the Playoffs.” Finding success in postseason fantasy football does require some luck; it also requires even greater attention to rosters. And much to the dismay of all, the injuries keep on coming.

That’s part of football, and fantasy managers are all too familiar with the aspect. During the playoffs, there is no trade that can save you, and the waiver wire is likely bare. An injury to a starter can devastate a team lacking depth. It can be difficult to take the information in, process it and decipher which fill-ins will benefit the most. Never fear, that’s exactly why The Infirmary is here!!!

The Moore absence hurts both the Panthers and fantasy managers. Look for Curtis Samuel and Robby Anderson to pick up the slack against a more-than-capable Broncos defense. With one Johnson out for Houston, another steps up to start. Though Duke Johnson hasn’t been special when called upon to lead the backfield this year, the volume will be there versus a Chicago run defense that ranks middle-of-the-pack.

Bryant will miss yet another game due to Covid protocols (despite having negative tests). His absence won’t be missed, however. It’s a shame Gaskin will sit this Sunday out; there is an opportunity to shine. The Chiefs run defense is towards the bottom of the league, and Miami’s is good enough to slow the Patrick Mahomes led offense. In relief, DeAndre Washington steps in to face his former squad. His player profiler draws some intrigue, but nothing of consequence has ever come from his play.

Ervin heads to injured reserve for the Packers with rookie A.J. Dillon returning from the COVID list. It matters not; Aaron Jones is the man and Jamaal Williams remains the No. 2. It’s a bummer to see Callaway’s first season cut short, but he made some noise in 2020 and is worth stashing in dynasty leagues. In a bit of good news, Justin Jackson returns for the Chargers to take his spot behind Austin Ekeler.

Without Golladay in Detroit, expect Marvin Jones and T.J. Hockenson to continue to benefit. Mims is out with a personal issue, and should be back next week. No Julio is never a good thing for the Falcons. For fantasy managers, it’s a good week for those rostering Calvin Ridley. Don’t be surprised if Russell Gage finds himself back in the spotlight as well. He’s gone over ten PPR fantasy points in two of the past three weeks.

At the running back position, Ahmed adds to Miami’s need to start Washington, and Mattison’s absence puts Mike Boone in the backup spot behind starter Dalvin Cook. Gibson hitting the bench in Washington opens the door for Peyton Barber, though J.D. McKissic is the back to play this week. He’s gone for 10-plus targets in three of the past five weeks and should be vital to the offense on Sunday.

On top of being down D.J. Moore, it looks as though Carolina will also be without CMC. Fire up Mike Davis yet again. Though Rudolph is unlikely to suit up for the Vikings, it does appear Irv Smith will be returning to the lineup this week. Homer has faded into the background in the Seattle backfield, and with Rashaad Penny returning from the PUP list next week, he can be safely forgotten about.

ANALYSIS: Despite nursing a calf injury throughout the week, it appears as though Elliot is on track to play Sunday. As are most other backs on this list. Jacobs and Swift look likely to return from their absences and Arizona coach Kliff Kingsbury believes Drake will be ready as well.

Gore’s availability will affect how much of a workload Ty Johnson receives. He’s worth a DFS play should Gore sit. Regardless of the status of Houston’s banged up receivers, the name to watch here is Chad Hansen. Remember that guy? In Week 13, the 25-year old caught five of seven targets for 101 yards and a touchdown. The former fourth round pick also boasts a compelling player profile, featuring a 10.87 (88th-percentile among qualified wide receivers) Agility Score and a 10.16 (77th-percentile) Catch Radius. The guy is worth a dart throw in DFS and a stash on dynasty rosters. 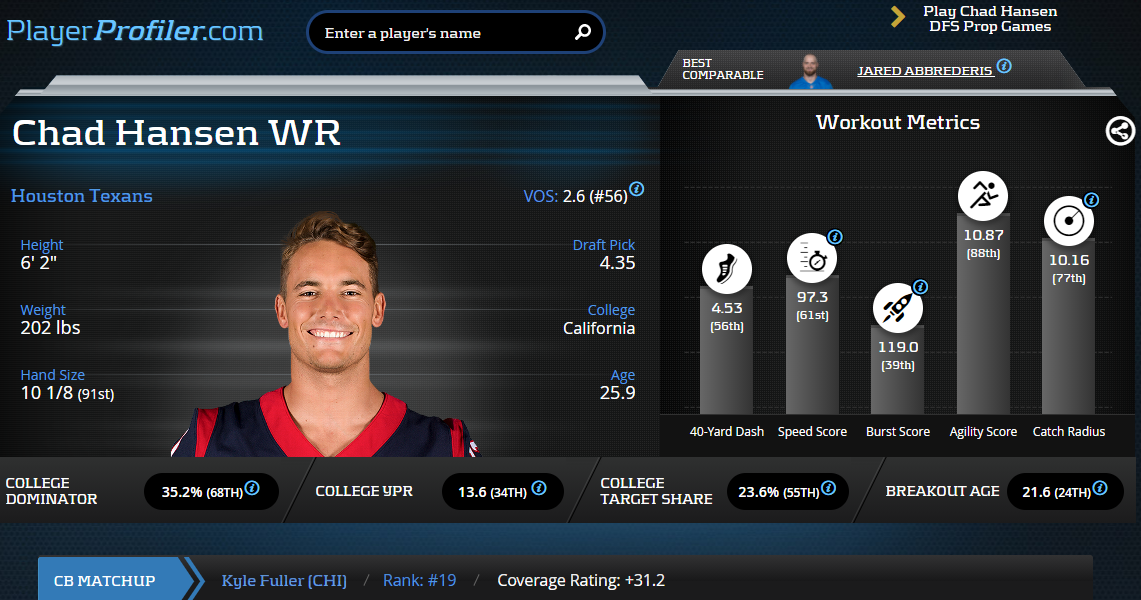 Hopkins and Higgins appear on track to play for their respective teams, and both should be in line for heavy workloads. Should Hooper miss for Cleveland, rookie Harrison Bryant could be an excellent play; he’s carrying a 94.1 percent True Catch Rate this season. The return of Jones to the Giants lineup is a boost for Sterling Shepard and Darius Slayton, the latter of which needs a bounce back. That could certainly happen this week against a sub-par Cardinals pass defense.

Making the playoffs in fantasy football is never easy; the hard part is out of the way. Now comes the harder part, navigating the brutal aspects of fantasy football when winning is at its most important. This game is a fickle beast, but one the rewards patience and research. Good luck to all in Round 1, and come back next week for another report from The Infirmary!