Debuting last week, the Dynasty Market Report monitors the NFL’s weekly action and leverages PlayerProfiler’s advanced stats and metrics to feature players moving on the dynasty rankings. After a wild injury-riddled slate that saw many big names go down, here are the Week 2 movers.

Parris Campbell’s rising stock has been temporarily capped due to a first quarter knee injury on an end around play. It was his first, and only touch of the game. This could open a buy window, especially if an injury discount becomes available.

Kerryon Johnson’s Snap Share increased to 35.2-percent in Week 2, however his lack of production continued. A first quarter touchdown saved a day where he otherwise produced 32 yards on eight carries and earned only one target. For the second straight week, he was outproduced on the ground by Adrian Peterson, who had 41 yards on seven carries. D’Andre Swift has taken control of Detroit’s receiving back role with another five targets. Generally, the Detroit backfield is currently not a place to find fantasy football success.

Week 1 Market Watchlist candidate Harrison Bryant saw a slight rise in Snap Share to 48.3-percent. He received some hype from the Thursday Night Football broadcast crew, but only produced 14 yards on two targets versus the Cincinnati Bengals. He was the intended end-zone target on Baker Mayfield’s fourth-quarter interception. Keep monitoring his stock as he continues to acclimate to life in the pros.

Ben Roethlisberger looks to have found a new favorite target in Diontae Johnson. Despite ball security issues to start each of his first two games, Big Ben has not shied away from targeting the sophomore receiver. The third-rounder from Toledo runs a 4.53 (56th-percentile among qualified wide receivers) 40-Yard Dash with a 34.0-percent (63rd-percentile) College Dominator Rating. His workout metrics don’t jump off the page, but his NFL production to date has been impressive. Through two games, he has 149 (No. 17) receiving yards, 58 (No. 12) yards after the catch and is averaging 16.4 (No. 19) Fantasy Points per Game. He has a 31.9-percent (No. 4) Target Share through two weeks and his 23 targets are only two less than NFL WR target leader DeAndre Hopkins. Johnson saw increases in both routes run (33 to 39) and targets (10 to 13) from Week 1 to Week 2.

Interestingly, Roethlisberger mentioned in an interview earlier this week that his trust and confidence in Johnson was still growing.

Roethlisberger said he talked to Diontae Johnson this morning and said tomorrow’s practice — when both of them will practice — be full speed to work on their trust.

If this connection still has room to grow, then dynasty managers who have (or are soon to acquire) the Steelers receiver will be in for some fantasy fireworks. It may not be long before Johnson’s dynasty stock truly skyrockets.

The Eagles are winless and Carson Wentz has had a forgettable the start to the season, averaging 12.7 (No. 27) Fantasy Points per Game. Philadelphia’s signal-caller is throwing the ball at an average of 42.5 times per game and has 512 (No. 18) passing yards, however his efficiency metrics are concerning. On the season, he has a 5.9 Accuracy Rating, 64.9-percent True Completion Percentage, and 43.9 True Passer Rating. These rank No. 30 or worse, and there are 32 NFL starting quarterbacks. For comparison, his 2019 season yielded a 7.9 (No. 5) Accuracy Rating and 86.0 True Passer Rating through 16 games. The fifth-year veteran has 11 (No. 1) Danger Plays and has thrown nine (No. 2) Interceptable Passes through two games. To make matters worse, he’s now being booed by the artificial crowd noise.

Before selling all your dynasty shares, realize that he has been plagued by protection issues resulting from a banged-up offensive line and his much anticipated new receiving weapons have yet to flash. At the same time, be cognizant of his miscues and subpar play. Signs point to him forcing the ball and trying to do too much. He has thrown four interceptions through two games and will easily hit a career-high if this trend continues. Over the past three years, he has thrown just seven interceptions per season. In addition, remember that the Eagles selected Jalen Hurts in the second round of the 2020 NFL Draft. Hurts was active in Week 2 and saw the field on three plays, albeit as a decoy.

The time is now for Wentz to turn it around and trend his stock in the right direction. In the meantime, his dynasty ranking will take a dip. If these downward trends continue into Week 3 versus the Bengals defense, the alarm bells might be at full volume.

Chicago Bears fifth-round rookie WR Darnell Mooney has earned himself a starting role out of the gates. At 5-10, 176-pounds, Mooney is a speedster running a 4.38 (96th-percentile) 40-Yard-Dash, but also has above average explosiveness with a 124.9 (71st-percentile) Burst Score. He owns an 18.9 (92nd-percentile) Breakout Age and a 36.5-percent (72nd-percentile) College Dominator Rating. 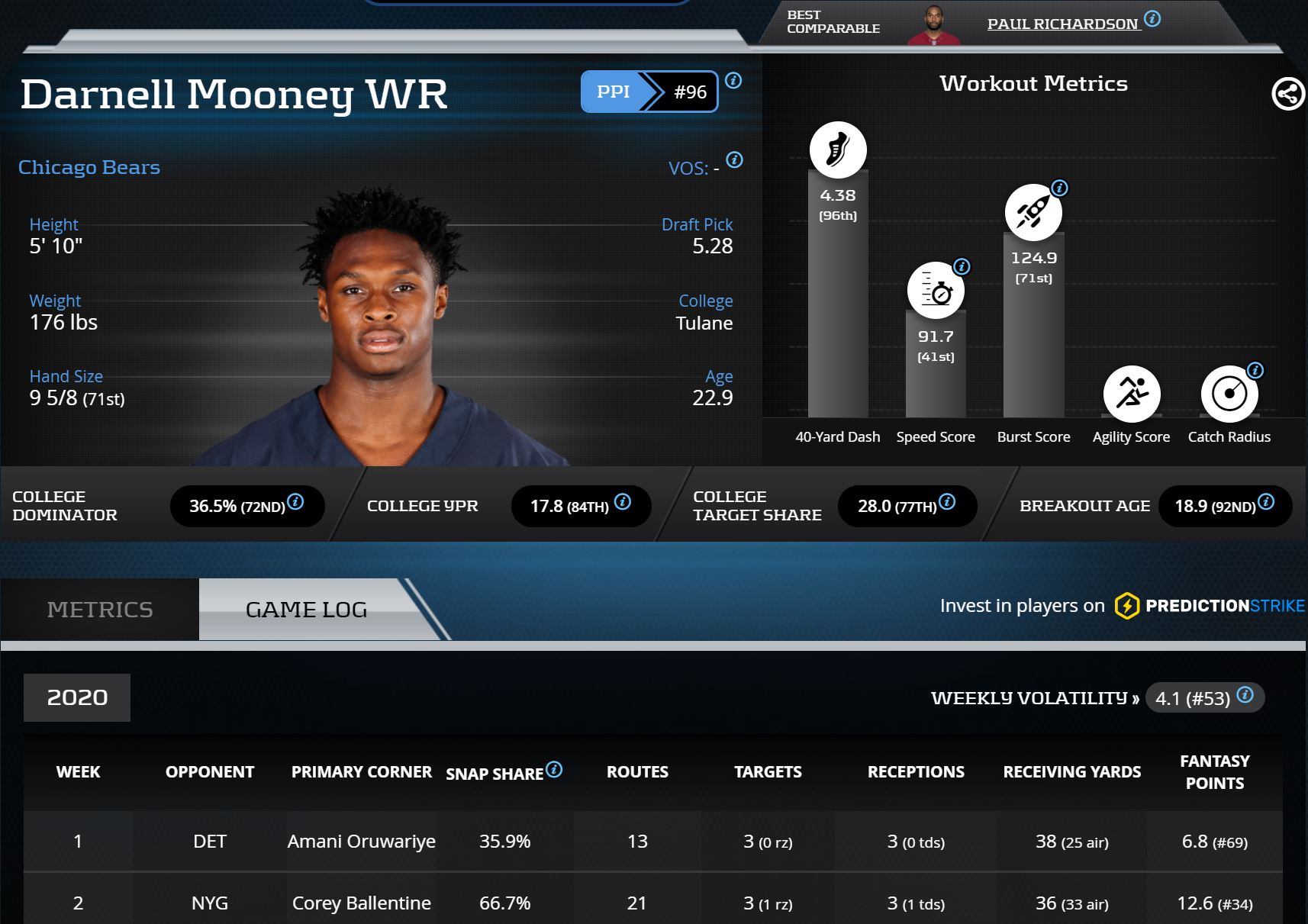 With both Ted Ginn Jr. and Riley Ridley healthy scratches in Week 2, Mooney’s Snap Share rose from 35.9-percent in Week 1 to 66.7-percent in Week 2. He commanded three targets in each game, catching all of them for 74 (No. 70) yards on the season. With Allen Robinson’s future with the Bears uncertain and Anthony Miller’s production wildly inconsistent, Mooney fits the profile of someone to watch and stash in dynasty wherever possible.