D.K. Metcalf enters the final week of the regular season as an interesting contrarian play. Over the course of the past four weeks, he has finished inside the top 24 scorers at the position only once. This, along with Russell Wilson no longer cooking, will likely drive down his ownership. However, Metcalf has cleared at least 89 Air Yards and eight targets in three out of the past four games. He is always a threat to finish as the WR1.

Now priced substantially higher than the $4,100 he was priced at last week, he still remains the lowest-priced Cowboy wide receiver. Being the receiver who is seeing the most Air Yards and targets in Dallas since Week 12, he remains a must-play.

Marvin Jones played with three different quarterbacks in Week 16. This showed up in the box score; he finished with only 4.9 (No. 79) fantasy points and 13 Air Yards. 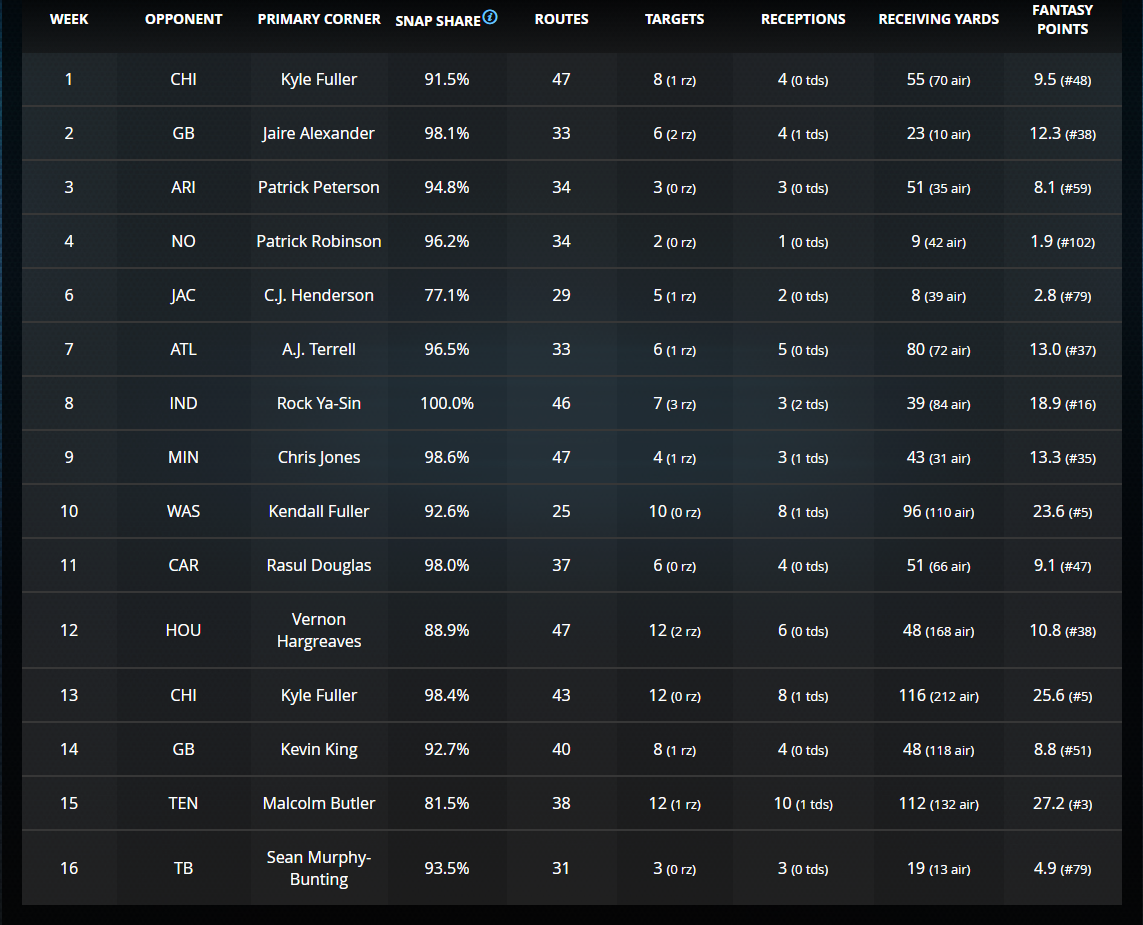 With Matthew Stafford expected to play against the Vikings in Week 17, look for Jones to rebound. Prior to last week’s disappointing performance, he had logged over 100 Air Yards in each game since Week 12. This includes two top five positional finishes in fantasy points in Weeks 13 and 15.

Denzel Mims finished with zero fantasy points last week. He saw coverage primarily from Denzel Ward, which freed up Jamison Crowder to torch the Browns secondary. Mims has now failed to see over 50 Air Yards in every game since Week 12. His usage is a concern, but his minimum price on DraftKings is not.

Mike Williams runs far, evidenced by a 14.9 (No. 10) Average Target Distance mark. Sometimes he catches the ball, but with a 53.8-percent (No. 95) Catch Rate, it is uncommon. For this reason, Williams remains a Hail Mary, tournament-only play.

Tee Higgins led the Bengals with 139 Air Yards in Week 16. He scored 21.9 fantasy points, finishing as the WR 12 on the week. Even with a tough matchup against the Ravens secondary, and fellow wide receiver Tyler Boyd set to return to the lineup, Higgins remains a strong play particularly in cash formats.

Breshad Perriman led the Jets with 107 Air Yards last week. Unfortunately, he realized exactly zero of those Air Yards for fantasy points. However, as the receiver who has led the Jets in Air Yards all season, he offers some intriguing cheap upside in Week 17. 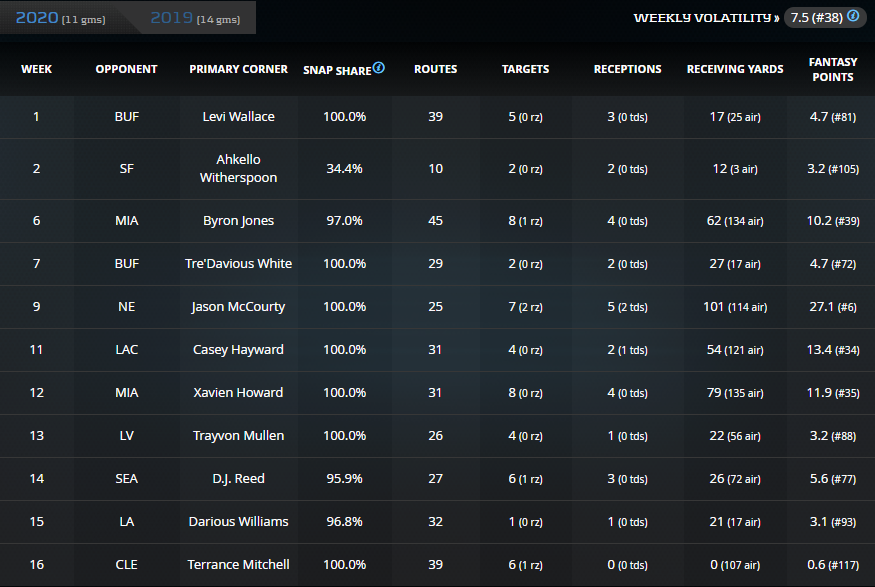 Perriman will be running routes against a Patriots secondary that is without Stephon Gilmore and receiving the ball from Sam Darnold, who continues to fight for his starting job for next season. Assuming he realizes at least some of his Air Yards this week, he could be a mainstay in tournament-winning lineups.

Marquez Valdes-Scantling runs far, evidenced by a 17.9 (No. 1) Average Target Distance. Sometimes he catches the ball, but with a 51.7-percent (No. 99) Catch Rate, it is uncommon. For this reason, he remains a Hail Mary, tournament-only play, especially with David Bahktiari out.

A.J. Green makes the list as one final sick joke. While the potential Hall of Famer turned 116 Air Yards into double digit fantasy points last week, Green faces long odds to produce like that again. He faces a Ravens secondary that previously held him to zero fantasy points in Week 5. Also, Tyler Boyd is set to return from a concussion which will likely take targets away from Green. While he makes for cheap exposure to the Bengals passing offense and could see similar Air Yards to Tee Higgins, he presents a zero-point floor, making him a desperation tournament play only.

Darius Slayton‘s demise as a fantasy asset continued last week as he only produced 4.6 (No. 83) fantasy points. However, the second-year receiver appears to be trending upward. 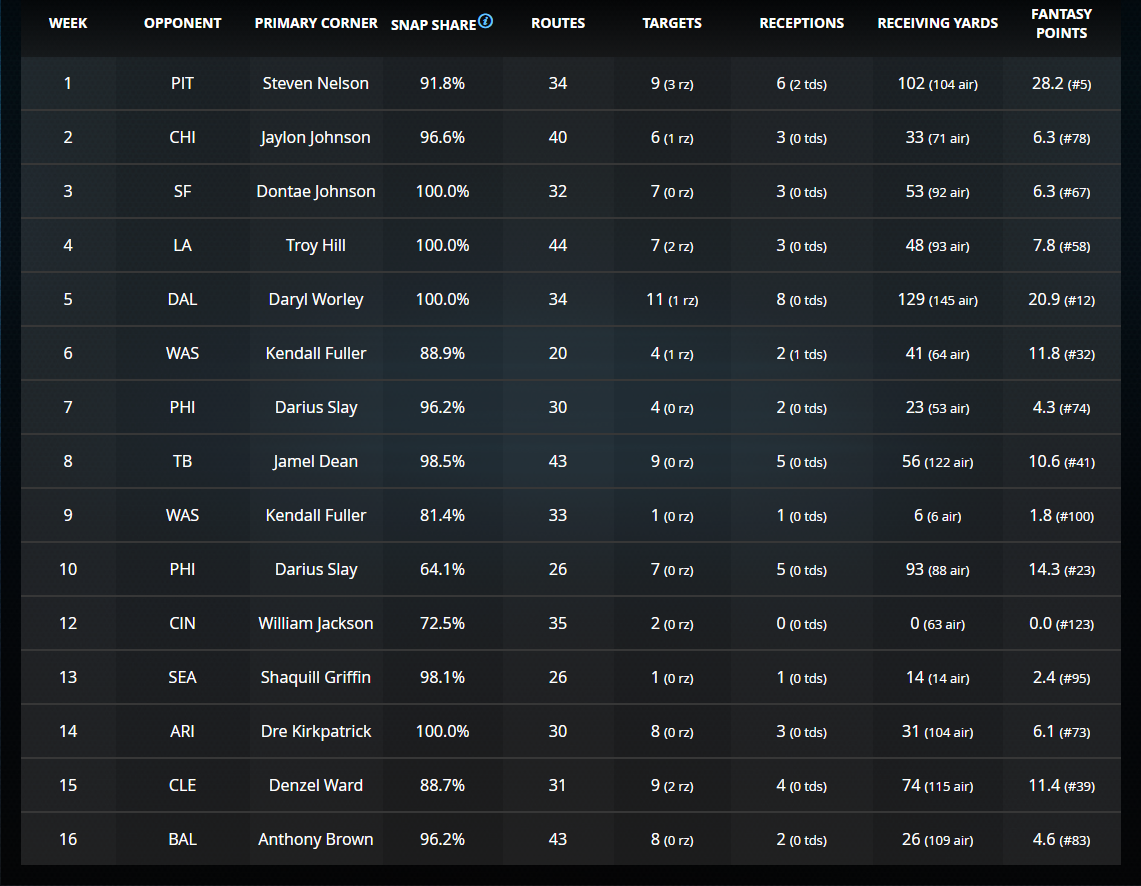 Slayton has seen at least 100 Air Yards in three consecutive games, and is set to have Daniel Jones back under center for a must-win game for the Giants’ playoff hopes. Facing a beatable Cowboys secondary, he makes for a great tournament play this week.

Jerry Jeudy‘s usage in the Broncos offense saw a huge boon last week. His Air Yards had taken a hit after the rookie wide receiver suffered an ankle injury in Week 12. He made up for his lost opportunities in Week 16, seeing 15 targets and 180 Air Yards. Unfortunately, despite this monster usage, he only finished with 12.1 (No. 35) fantasy points. Assuming he is fed again, look for him to straighten out the drop issues and perhaps be a week winner in DFS.

Good luck to everyone in Week 17. May all your Air Yards be realized.