Unlocking the potential of weekly player volatility in daily fantasy football gives gamers a competitive edge. A key metric on PlayerProfiler, Weekly Volatility measures a player’s week-to-week fantasy point scoring oscillation. This article will track the most volatile wide receivers and provide insight on when to deploy them in large-field GPPs. Using matchup and usage data combined with advanced stats to pinpoint the best plays yields the best ROI from volatile players. The focus will be on those highly volatile players with cheap salaries and low projected rostership who make screaming plays with tournament winning upside.

Run It Back With Ridley

Calvin Ridley’s inflated salary on DraftKings drives his projected rostership down and makes him a main slate leverage play this week. At his most expensive price point this season ($8,200), Ridley’s salary has crested $8K for the first time. But he’s worth the price considering his Target Share, high ceiling and the matchup against a beatable Bucs secondary. 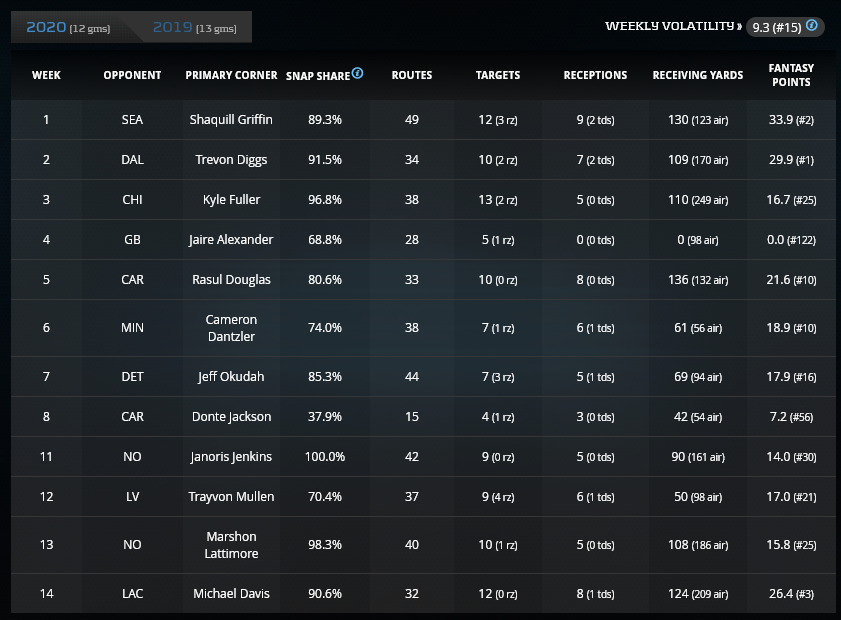 Over the past four games, Ridley has either scored or recorded at least five receptions. He topped 100 receiving yards in Weeks 13 and 14, but hasn’t had a multi-TD blowup performance since Week 2. That falls well within his range of outcomes against the Bucs. Tampa Bay allows +2.35 fantasy points above the mean to opposing receivers. Values over 2.0 indicate a cake matchup, and any time a player of Ridley’s caliber enters that scenario, it makes him an enticing play. He squares off in a primary cornerback matchup against Carlton Davis, who’s allowed five TDs this season. Davis let Demarcus Robinson score a 50-burger on him in Week 12.

For all his fantasy scoring fluctuation – his 9.3 Weekly Volatility score ranks No. 15 among qualified wide receivers – Ridley has posted WR1 numbers in five different weeks this season, including three top-3 finishes. He’s earned a consistently high Target Share, seeing no fewer than nine targets across his past four games. Last week without Julio Jones, Ridley caught 8-of-12 targets for 124 yards and a score. Regardless of Jones’ availability (hamstring), Ridley needs to be fired up.

D.K. Metcalf needs no narrative to smash a slate, and he won’t get one this week. The matchup against the Football Team projects as a tough test, with Washington allowing -4.2 fantasy points below the mean to opposing receivers. They hold receivers to a total of 19.8 Fantasy Points per Game, the third-fewest this season. Metcalf carries the third-highest salary ($8,600) on the main slate, which pushes the masses off him. And when that happens and his projected rostership falls below 10-percent, he deserves to be in GPP lineups.

The NFL’s premier wide receiver presents a matchup problem for any team he faces. At 6-3, 228-pounds Metcalf runs a 4.33 40-yard dash, resulting in a 99th-percentile Speed Score. He beats defensive backs in a myriad of ways, meaning Washington’s Kendall Fuller figures to have his hands full. No slouch, Fuller clocks in at No. 27 in PlayerProfiler’s cornerback rankings with a +7.2 (No. 48) Coverage Rating. But at 5-11, 187-pounds, he’ll look like a high school kid next to Metcalf.

Boasting a 40-point fantasy ceiling, peak Metcalf crushes slates when he explodes. He also provides a safe floor, having posted fewer than 10 fantasy points only twice this season. His last blowup game came in Week 12 against the Eagles, so he’s due for another. Overall, his fantasy scoring fluctuation this season earns him a Weekly Volatility mark of 9.6, which ranks No. 12 among qualified receivers.

For fantasy gamers playing the weekend or Saturday-only slates, Marquez Valdes-Scantling deserves consideration. A streaky player in recent weeks, he recorded three performances with 19 or more fantasy points and two with six or fewer over the past five games. He’s scored four touchdowns in that span, and shown off more upside with a higher ceiling, too. Prior to Week 9, MVS posted one game with 19 fantasy points and six games with fewer than 10. 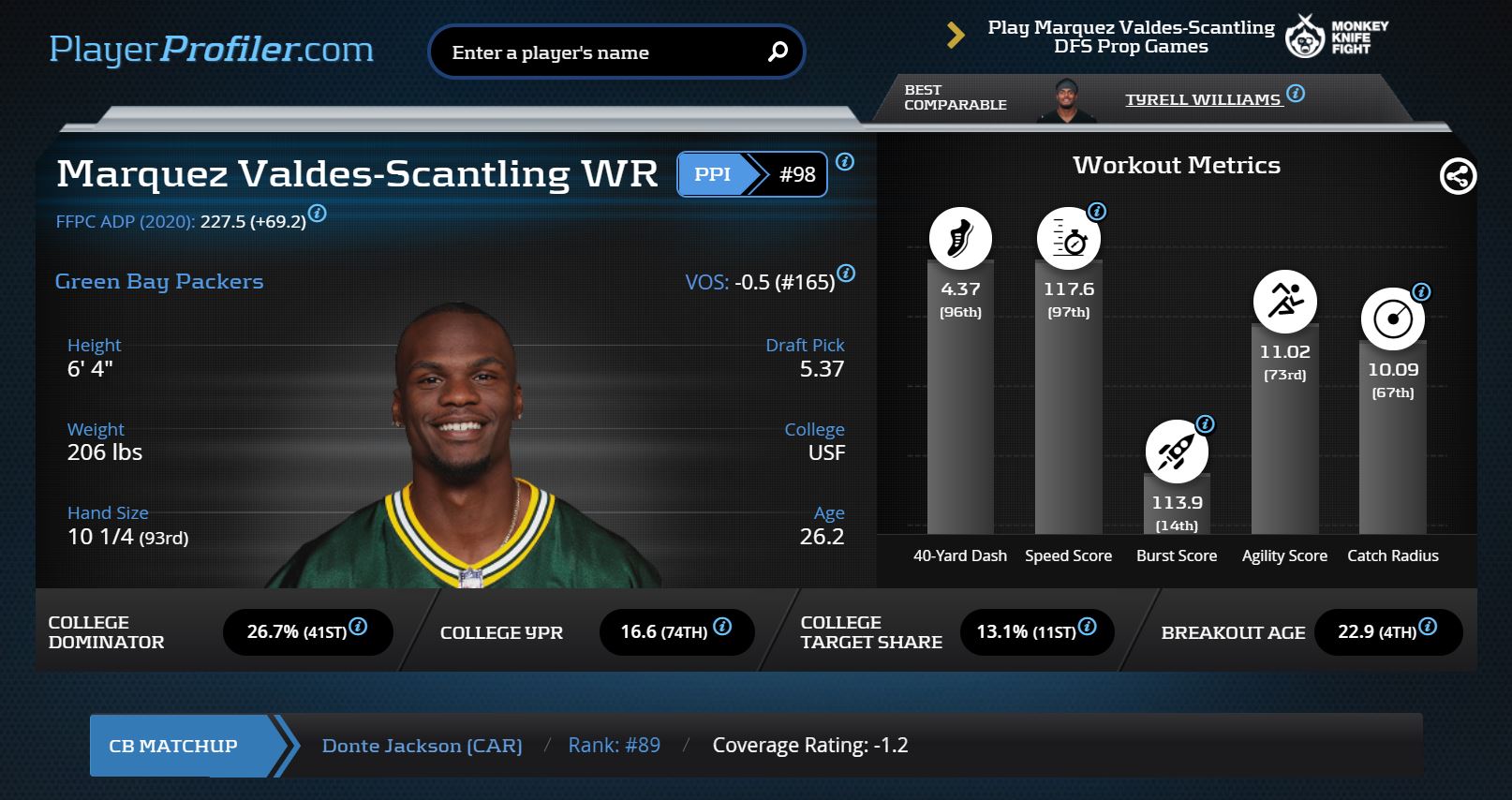 Much more boom than bust lately, Valdes-Scantling saw his Weekly Volatility rise to a No. 21-ranked 8.8 mark. He makes for a fine main slate upside play with low projected rostership. He draws a primetime matchup against the Panthers on Saturday night with a projected total of 51.5 points. Carolina’s middle-of-the-pack secondary allows -0.14 points below the mean to opposing receivers. However, per Sharp Football Stats,/ they’ve yielded 44 pass plays of 20-plus yards this season, the seventh-highest mark. MVS has notched nine such plays this season. He leads all receivers with a 17.6 Average Target Distance mark, and has drawn 21 (No. 8) Deep Targets.. He faces cornerback Donte Jackson in a primary matchup, and things should go his way. Jackson carries a -1.2 Coverage Rating and is PlayerProfiler’s 89th-ranked cornerback.