Calvin Ridley again makes the Paying Up section of the article. Last week, he dispelled the notion that he lacks upside without Julio Jones in the lineup. Without Jones in Week 14, Ridley morphed into the passing game for the Falcons, seeing 12 targets and 209 Air Yards. He took this opportunity and turned it into eight receptions, 124 yards and a touchdown, good for 26.4 fantasy points, the WR3 finish on the week. He is set to face a Buccaneers secondary that has been exploitable in recent weeks. Look for another top tier finish.

D.K. Metcalf‘s continued dominance of the Seattle passing game has progressed even with Russell Wilson no longer cooking. He has accumulated 275 more Air Yards than Tyler Lockett over the past four weeks. With Seattle set to square off against Washington’s tough front-seven, Wilson may have to throw the apron back on and hop into the kitchen for Seattle’s offense to have success in Week 15. If he does, look for Metcalf to go nuclear.

Keelan Cole is the east coast version of Tim Patrick. He is constantly undervalued despite double digit fantasy point outcomes and excellent efficiency. With Gardner Minshew now back under center for the Jaguars, Cole will look to regain his early season form.

In the games with Minshew under center, Cole has averaged almost 12 Fantasy Points per Game with only two below double digits. Assuming he and Minshew reconnect in Week 15, Cole makes for a great cash play as a likely candidate for garbage time fantasy points against the heavily favored Ravens.

Coming off a game against the Raiders where he saw 136 Air Yards, Hilton faces the Texans whom he scorched for eight receptions, 110 yards, and a touchdown in Week 13. Hilton is a recommended play in both cash and tournaments thanks to his late-season resurgence.

Josh Reynolds last made the Air Yards Value Index in Week 12 and he disappointed, posting only nine fantasy points. Prior to this, he made the list in Week 10 and finished with 17.4 fantasy points against the then-porous Seahawks secondary. This week, he faces a Jets secondary that is highly exploitable. However, caution is in order with the fourth-year receiver running only 15 routes last week thanks in large part to the Cam Akers breakout. Assuming the Rams get back to their pass-happy ways, Reynolds should return value in all formats.

Christian Kirk only saw five Air Yards last week against the Giants. He has slumped recently, averaging only 3.5 fantasy points over his last three games. 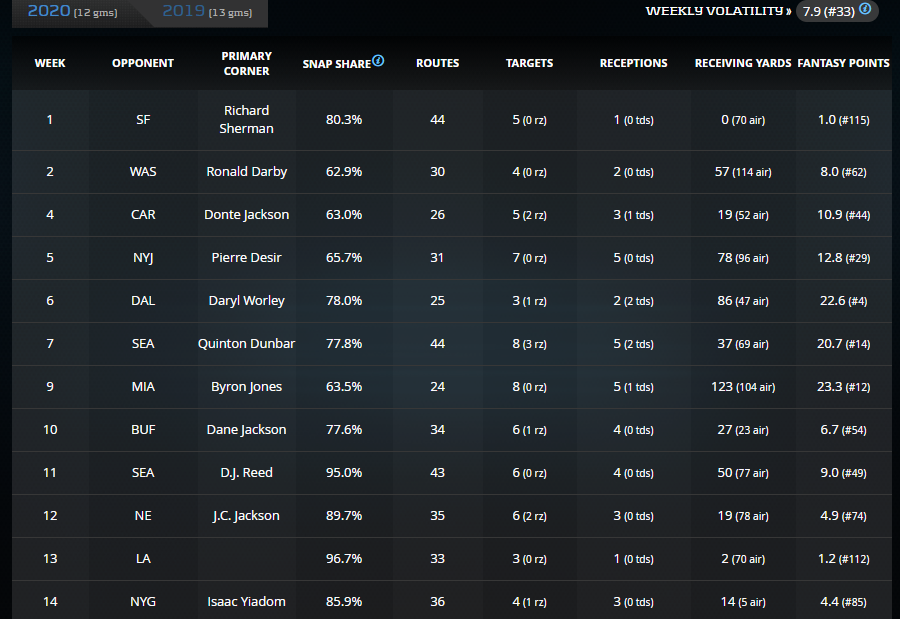 Despite a season-low five Air Yards last week, Kirk had seen at least 70 in the three games prior to Week 14. At only $4,300, he has rebound potential against the Eagles and is priced as a value.

Breshad Perriman failed to capitalize on Denzel Mims‘ absence last week, scoring only 5.6 fantasy points. Though he did lead the Jets in targets and Air Yards. With a 14.7 (No. 11) Average Target Distance mark, he remains a downfield target in the passing offense. He remains extremely volatile and is best served as a tournament-only play.

Denzel Mims missed last week due to personal reasons, but is set to return for a tough matchup against the Rams secondary. He remains the focal point of the Jets offense, seeing a 38.2-percent Air Yards Share.

Despite a tough matchup against a stingy secondary, Mims will likely serve as New York’s go-to receiver. His floor remains low, but he makes for the best bet among Jets receivers to score the most fantasy points.

Damiere Byrd has continued to pull away from Jakobi Meyers for WR1 duties in the Patriots offense. He has out-targeted Meyers 33 to 20 over the past four weeks. He has also outgained Meyers by almost 100 Air Yards during that same time. While Byrd faces off against a stout Miami secondary, he is the most likely receiver to score fantasy points if Cam Newton is forced to throw for more than 200 yards.

The good news is that Darnell Mooney just had his best fantasy game since Week 8. The bad news is he saw negative five Air Yards. This type of usage in the Bears passing offense is an absolute anomaly for a rookie wide receiver who has averaged 76.4 Air Yards per game this season.

Mooney should be deployed in his typical role against a soft Minnesota defense this week. However, he amassed only one Air Yard in Chicago’s Week 10 matchup against the Vikings. While he presents significant risk because of this, he is priced below $4,000 and is a preferred cheap option in both cash and tournament formats.

D.J. Chark‘s return to Jacksonville’s lineup after a one-week absence did not go well. Despite leading all Jaguars with 273 Air Yards since Week 13, Chark has only scored a total of 9.7 fantasy points during this time. Perhaps Gardner Minshew can unlock his potential similar to last season, and the early start of this year. His only top-five weekly finish occurred with Minshew under center in Week 4 when he scored 29.5 fantasy points.

Against a tough Ravens secondary, Chark is a better tournament option than cash play as a result of his inconsistent fantasy production this season.

As we discussed last week, Michael Gallup garners similar opportunity to both CeeDee Lamb and Amari Cooper. However, last week Gallup led all Cowboys receivers with 81 Air Yards, more than both Lamb and Cooper combined. Despite this opportunity, he was outscored by both in fantasy points. Hopefully, he can avoid Richard Sherman in Week 15 and realize some of those Air Yards. Priced at only $3,500, he doesn’t have to do much to return value.

Good luck to everyone in Week 15. May all your Air Yards be realized.