The AFC South Training Camp is in full swing so it’s time to check in on how the AFC South is looking. How is Derrick Henry looking? Is Matt Ryan gelling with the new organization? What is the Texans offense looking like? Is Trevor Lawrence on the right path? All of these questions will be answered and more.

Checking in on King Henry:

Considering he returned during the playoffs last season and has had some more time to heal, it is no surprise that Derrick Henry has been fully practicing at camp. Henry was even asked about his potential workload and said “I’m good with whatever it takes to win.” That implies that he’s ready to handle the ball as many times as it takes. He still carries a high re-injury risk on his foot, but we all know Henry is basically superhuman. If you do own him though, it makes sense to grab Hassan Haskins who has been working in with the 1st-team during camp.

Derrick Henry working this morning. And yes he moves fast in this drill. pic.twitter.com/Lm4m7bAajQ

With the A.J. Brown trade and Julio Jones signing with the Buccaneers, the Titans are left with a pretty poor receiving corps. The WR1 on the most recent depth chart is Nick Westbrook-Ikhine, but Robert Woods and rookie Treylon Burks were brought in this offseason. Woods has looked solid during camp, but Burks has presented some issues. Burks failed the conditioning test this Spring, and has rarely worked with the 1st-team offense during camp. He is still working his way up the roster and reportedly has a long way to go as he is still lining up wrong and running the wrong routes.

While Malik Willis is QB3 on the most recent depth chart, he has definitely shown his potential during camp. He should find himself as the QB2 by the start of the season, but it is likely still Tannehill’s job in 2022. Coach Mike Vrabel has said that Willis still needs to work on his timing. However, he is impressing at camp and continues to show signs of his potential. He is definitely the future of the organization.

Malik Willis with an absolute dime 👀(via @Titans) pic.twitter.com/TH7uRa7VJh

The Titans finished 2021 as the No. 6 defense in Points For and the No. 12 in Yards Allowed. Head Coach Mike Vrabel and Defensive Coordinator Shane Bowen have the defense on lock. With no major changes, you can expect the defense to continue to be one of the better units in the league. Jeffery Simmons, the safety duo of Amani Hooker and Kevin Byard, and linebackers Bud Dupree and Harold Landry will continue to impress in 2022. The cornerbacks are still weak but with good defensive scheming, and the aforementioned players, they should be fine.

The Former MVP is doing what you would expect a former MVP QB to do at training camp. He’s hitting the throws he needs to hit, he’s coaching up his teammates, and showing what it takes to be a leader. Matt Ryan is the fifth QB in five years for the Colts, but he looks to be their option for at least the next two seasons.

Hines as a Receiver:

One of the earliest reports from Colts’ camp was that they were using Nyheim Hines in the slot. Head Coach Frank Reich even came out and said, “If I were a fantasy owner, I’d consider drafting Nyheim Hines.” Let’s face it, Jonathan Taylor is going to handle pretty much all of the carries, but the fact that the Colts want to use Hines in another way shows their trust in the player. Ryan’s MVP season had Devonta Freeman and Tevin Coleman. Taylor and Hines is fairly similar. Hines has a great profile, and it’s great to see that he could have standalone value in 2022 since he has a fairly low ADP.

In my Divisional Dive series, I wrote that both Alec Pierce and Jelani Woods are breakout candidates this season. They both are incredibly gifted athletes with great potential. Unfortunately, Jelani Woods has not impressed yet at camp- with the only video on Twitter right now being a pass intended for him that was broken up by third-round rookie S, Nick Cross. Alec Pierce however has been impressing. Pierce has also officially been listed as a starting WR on the most recent depth chart. If he continues to impress, he will no doubt be a valuable fantasy asset in 2022. He has been matching up with Stephon Gilmore much of camp, so it’s fair to say he’s been thrown into the deep end. Those reps against one of the best CBs should prove valuable though.

Alec Pierce with an impressive TD catch over the DB in the 1 on 1’s #colts | @alecpierce pic.twitter.com/Ussfat6qvF

Darius Leonard started camp on the PUP list, and it is looking like he miss regular season games due to back surgery. That’s a huge blow to the defense for sure. Luckily, the Colts bolstered their secondary in the draft and also brought in corners Stephon Gilmore and Brandon Facyson. Gilmore especially has impressed at camp with multiple interceptions. Frank Reich and Matt Ryan both have said plenty about Gilmore’s presence in camp. If he can get anywhere back to Defensive Player of the Year form, the Colts defense will be fine while Leonard is gone. Matt Ryan makes the offense better as well, so the onus isn’t as much on the defense’s back anymore either.

When asked if he felt he has improved, Davis Mills said he felt confident on his end to last season and is ready to build on it. He feels like he is playing faster, and offensive coordinator Pep Hamilton agreed. He has impressed the media this camp plenty, and there are even reports that Nico Collins is looking really good. If that is true, then the Texans passing game really may not be too bad in 2022.

#Texans Davis Mills bigger and stronger for year 2. He’s ramped it up in every area. Impressive start to camp. pic.twitter.com/2Z5I61clxT

Dameon Pierce has been impressive at camp. Many expect Pierce to take over the starting role at some point, but he still has a way to go as far as learning NFL protection schemes according to Pep Hamilton. Marlon Mack was officially released by the team this week which opens the door for Pierce to start.

The wide receiver corps took a hit with news that John Metchie has Luekemia and will likely have to miss the season. Hopefully he will return for 2023, but for now it’s up to Brandin Cooks and Nico Collins. Cooks is doing what Cooks always does, and that’s showcase his talents as a deep threat and true alpha receiver in this league. He has impressed, but of course he will. One of the big stories is the improvement of Nico Collins. Collins has reportedly been working with Andre Johnson over the offseason, and the results seem to be paying off. His size, speed, and catch radius make him an excellent complement to Cooks so be on the lookout for a second year breakout from Collins.

I asked NFL reporter / Pro Football Network’s @AaronWilson_NFL for two players that have stood out during #Texans training camp.

WR Nico Collins and S Jalen Pitre are the two players on the rise throughout this offseason. 👀

The secondary was one of the main concerns addressed in the draft by the Texans, with Derek Stingley and Jalen Pitre being drafted early. Both of these rookies have been named starters already and both have impressed in camp, with both having interceptions. However, this is still basically the same defense that was No. 31 against the run with a couple new shiny pieces that should be foundational.

The Jaguars lost the Hall of Game 11-27 and didn’t really show much of anything exciting outside of five sacks. Pretty much any offensive starter was held out of the game. We did see some Laquon Treadwell action as he had one catch for three yards and almost fumbled. But that’s the Hall of Fame game for you, just glad we got to see some NFL football!

Trevor Lawrence and his Weapons:

As expected with a year under his belt and a better coaching staff, Trevor Lawrence has shown promise at camp. Christian Kirk rolled his ankle, but should be okay. Travis Etienne has been impressing at camp as well upon return to injury and should be a solid help in the passing game. The weapons here are good enough, but the weight mostly falls on Lawrence’s shoulders. So far though, he is taking the next step.

Trevor Lawrence sees it. Coaches see it. Any observer who saw Lawrence in last year's camp sees it.

The #Jaguars QB has improved, showing better accuracy, decision-making and overall consistency in camp. The question now is where he can go from here: https://t.co/McdlhH2QUo

James Robinson returned from his Achilles injury before camp started and avoided the PUP list. As a result, he’s listed as RB1 on the depth chart and is taking most reps with the 1st-team offense. Travis Etienne will still get his though as he has been lining up as a receiver and alternating carries with Robinson. 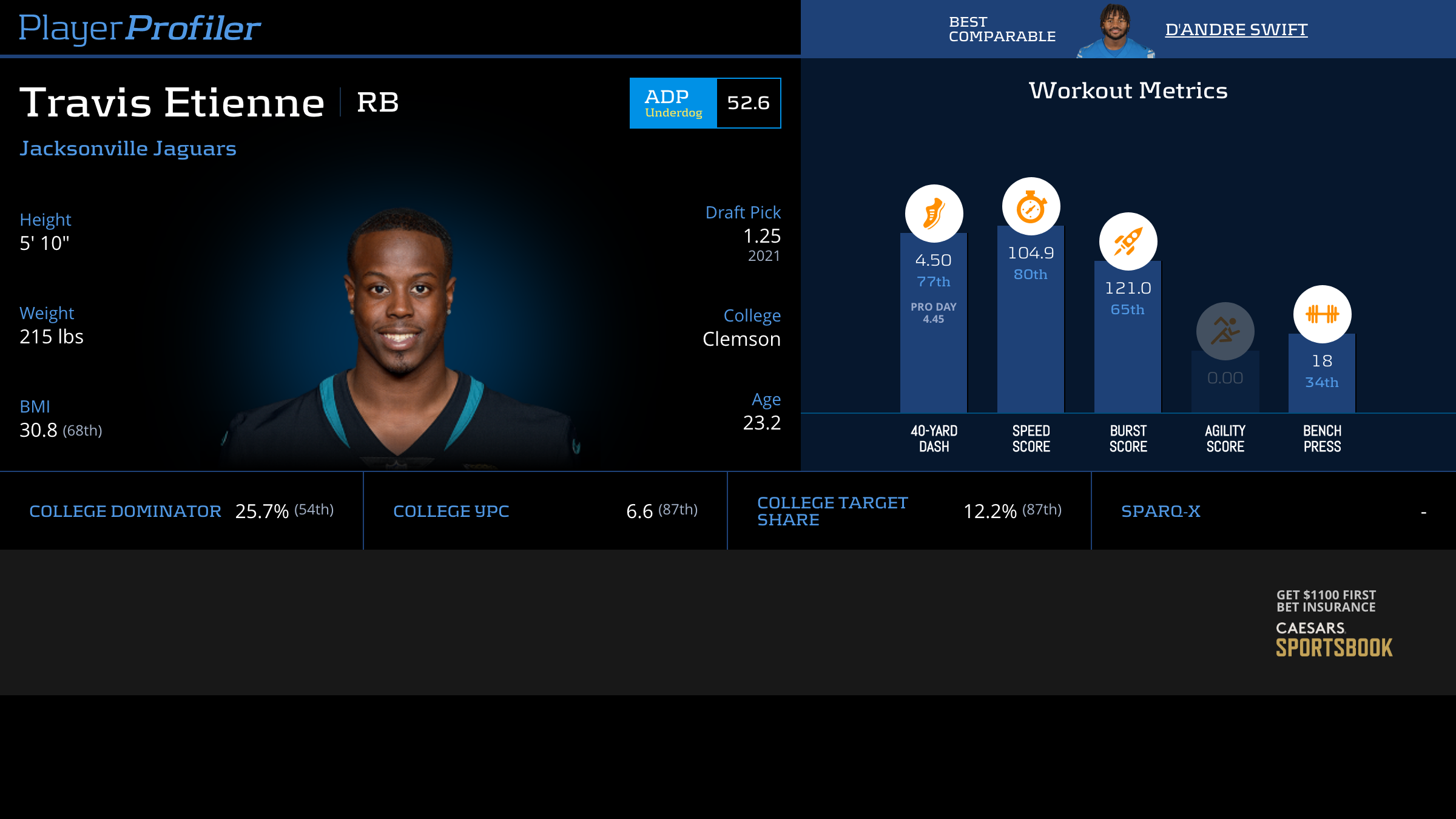 He is the RB2, but think of it more like Alvin Kamara and Mark Ingram. Because of that though, Etienne may be overvalued right now so tread carefully if you haven’t drafted yet. Etienne will be playing against the Browns in week 1 of Preseason, our first true look at his play on the NFL field.

The Jaguars defense has been impressive at camp and when the starters were on the field for the Hall of Fame game they looked decent as well. Defense was a huge focus for the Jaguars this offseason.

Andre Cisco said the mindset for the defense is to be one of the best in the league.

“We want to be among the league's best for our defensive play.” #Jaguars pic.twitter.com/0Cp6Iz1v68

They spent both their first round picks on defense, selecting Travon Walker and Devin Lloyd. They also signed Foye Oluokun in free agency. Sacksonville may be returning in 2022, with five sacks in the Hall of Fame game and an upgraded defensive line and linebacker corps.