Close your eyes and imagine the Podfather’s “cliché alert, cliché alert” sounder because what I am about to say would absolutely trigger it if I were on the Mind of Mansion radio program. Drafting is paramount in seasonal leagues. Leagues can be lost messing up the early portion of the draft, but they are definitely won finding the players later that outperform their draft prices. Here are players that I would consider ADP Smashers in 2022 according to their Underdog ADP’s.

Kirk Cousins is being selected as the No. 15 quarterback off of the board, but there are some indicators suggesting he may perform much better than that. In 2021, Cousins made 43 Money Throws (No. 3 amongst qualified QB) and the only signal callers who posted more were Kyler Murray and Tom Brady. Cousins also had a 43.1-percent Deep Ball Completion Percentage (No. 7) and a 99.8 True Passer Rating (No. 6) last season. That will come in handy given the Minnesota Vikings’ offensive weapons. Getting the ball to Justin Jefferson, Adam Thielen, KJ Osborn, and Dalvin Cook will bring good results. 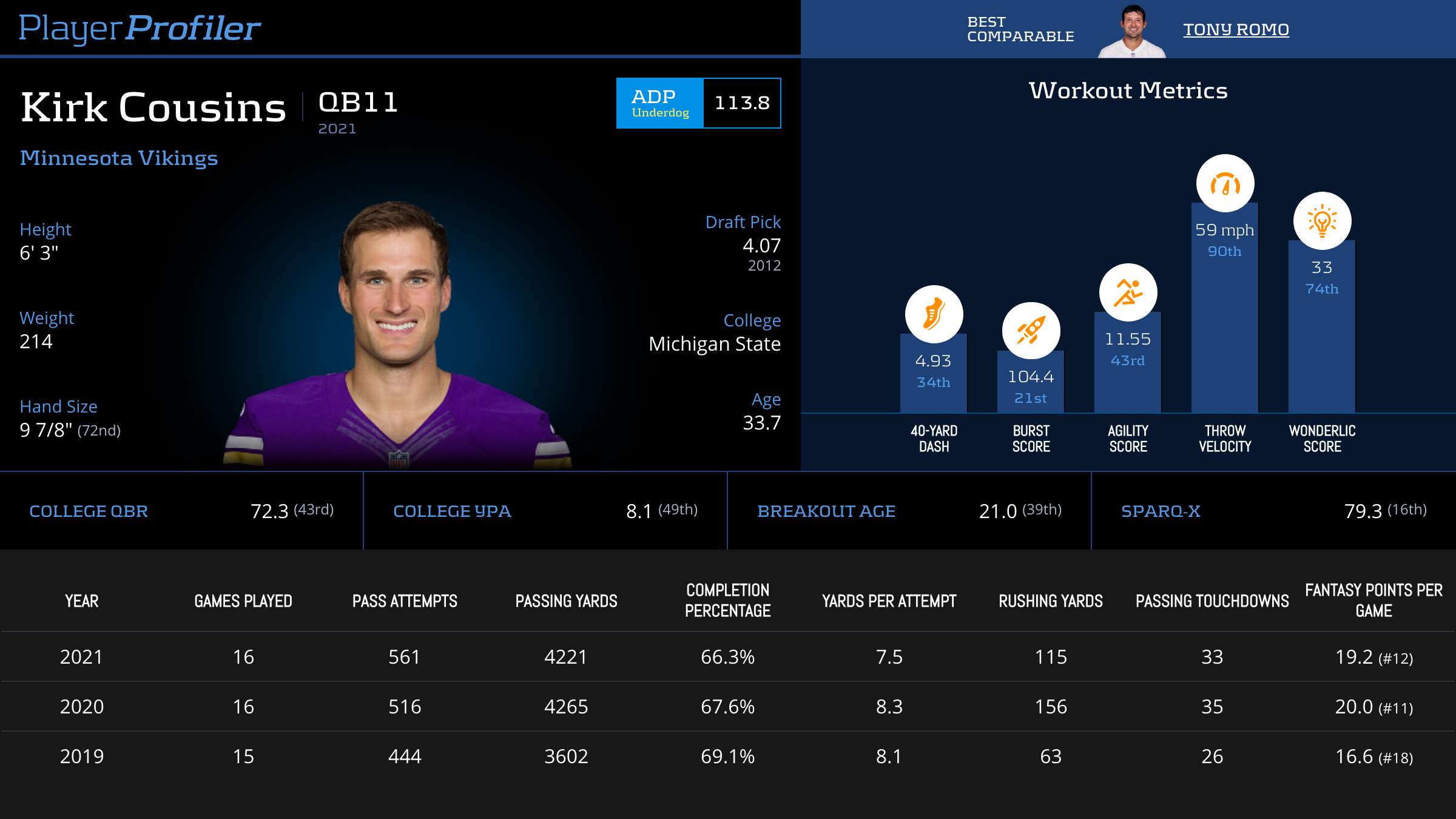 There is a blemish on Cousin’s 2022 report and that is his offensive line. In 2021, the Vikings’ quarterback was forced to make 154 Pressured Throws (No. 1). No matter how dangerous a team’s skill players are, a bad offensive line can derail even the best. Luckily there is some hope. So far in the pre-season, Minnesota’s o-line has posted the No. 9 best pass blocking grade on PFF. Last year, Cousins posted a 74.2-percent Clean Pocket Completion Percentage (No. 6). If the man has time, he will dice up opposing defenses.

The Vikings hired former Rams offensive coordinator, Kevin O’Connell in the off season. Matthew Stafford had a massive 2021 campaign, and O’Connell was a reason why. Los Angeles had the No. 7 best Pass DVOA last year according to Football Outsiders. Between his steady play, the offensive weapons, and the new offensive minded head coach, Cousins is going to destroy his current ADP. He’s set to be the captain of the ADP smashers in 2022.

There may not be a better value than Chase Edmonds heading into the 2022 campaign. As things stand now, the Miami Dolphins running back is the No. 28 back taken in fantasy drafts. On the surface it is easy to see value since he was the RB 23 on a points per game basis last year. Edmonds flashed in a number of key efficiency metrics in 2021. The former Cardinal had 5.7 Yards per Touch (No. 7 amongst qualified RB) which was more than Leonard Fournette, Javonte Williams, and D’Andre Swift. He recorded 4.7 True Yards per Carry (No. 9) and had a 6.0-percent Breakaway Run Rate (No. 11). The fact that he did this with a 51.4-percent Opportunity Share (No. 28) is impressive. 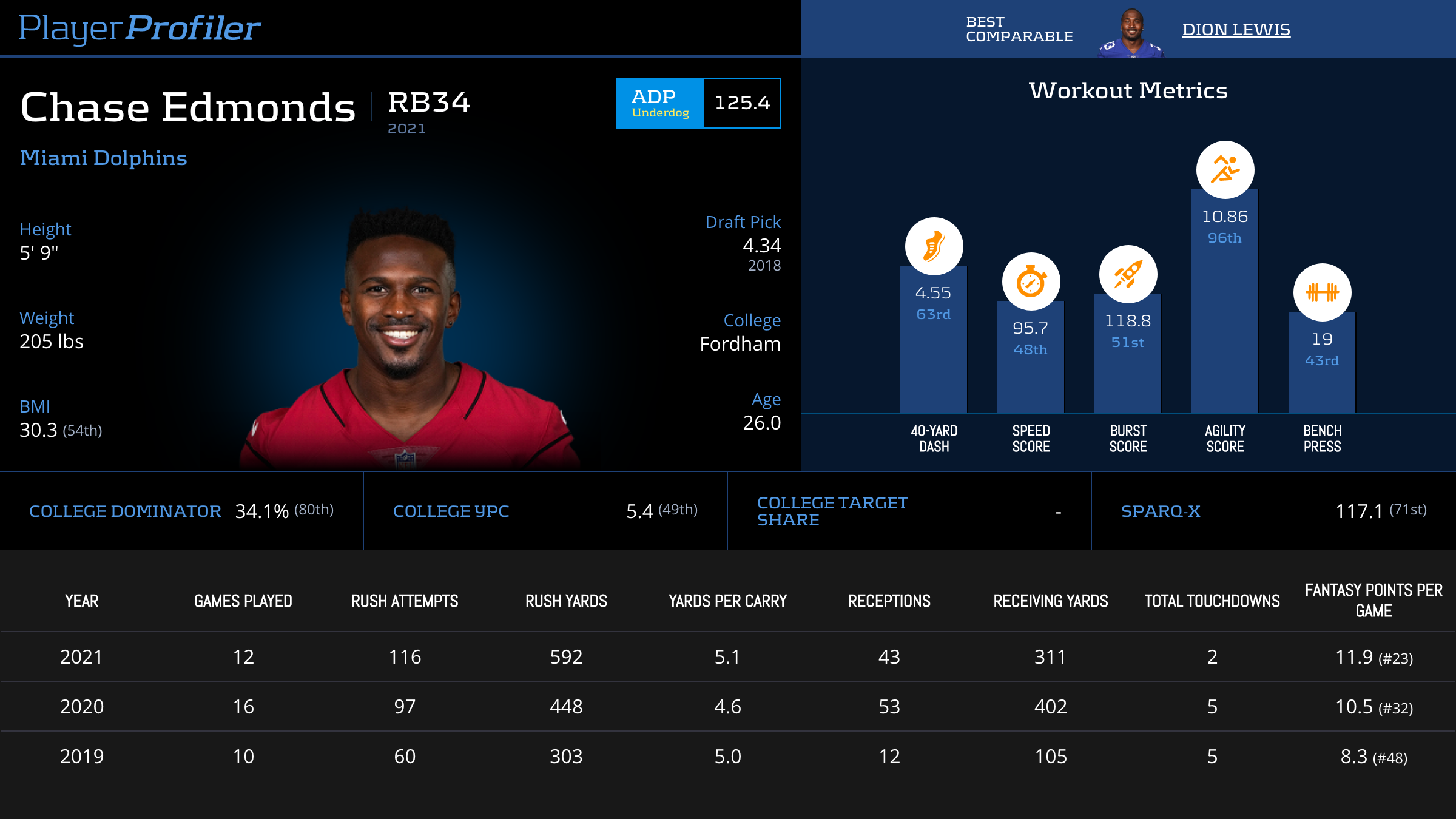 Opportunities should not be an issue for Edmonds in the upcoming season. The Miami Dolphins brought in Mike McDaniel to be their new head coach this offseason. McDaniel will bring a lot of the run concepts that he used in San Francisco as the 49ers’ Offensive Coordinator with him to South Beach. Not only did he bring aspects of an offense that had the No. 4 best Rush DVOA (according to Football Outsiders), but he also brought in his primary running back, Chase Edmonds. McDaniel and the Miami organization committed to Edmonds by giving him a two-year $12 million contract.

Not only has Edmonds been efficient in his professional tenure, but he has also shown an ability to catch the ball at a high level. Last season he earned 43 Receptions (No. 13) which equated to a 13.4-percent Target Share (No. 7). He was effective in the pass game as well. Edmonds put up a 1.65 Yards per Route Run (No. 9). Drafting efficient, versatile running backs is great process. At his current price tag, Edmonds is looking like he will far outperform that eighth round ADP. That is why Edmonds will be one of the ADP smashers in 2022.

The New England Patriots wide receiver comes with some risk, but Jakobi Meyers will smash his current average draft position. Firstly, he comes off the board as late as Round 13 as WR 68. In 2021, he finished as the WR 29 overall and WR 35 in fantasy points per game. Despite the top 35 finish there was a substantial amount of positive regression indicators in his ’21 profile. Check out my article highlighting players that are going to face regression in 2022. His underlying metrics suggest that Meyers should have 3.45 more touchdowns (No. 2 amongst qualified WR) and score 2.57 more fantasy points per game (No. 4) according to PlayerProfiler’s Expected Metrics. 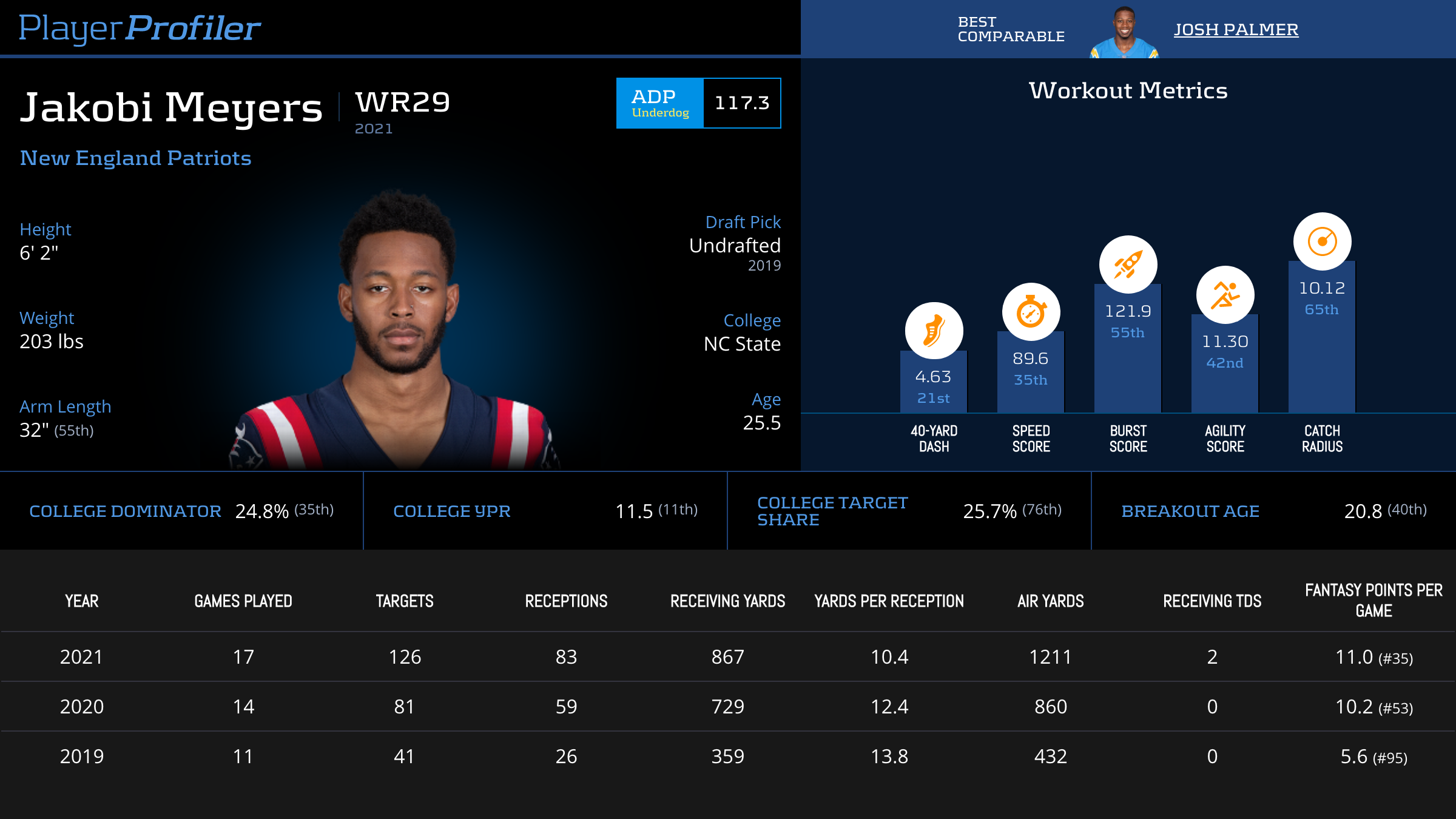 Banking on better fortune is not the only reason to get excited about Meyers. The wide receiver is also a tough guy to cover. Just ask the cornerbacks he faced. Meyers finished 2021 with a 45.7-percent Win Rate vs Man coverage (No. 5) and racked 245 Total Route Wins (No. 6). Winning nearly half of the routes run vs man coverage is a positive indication that he will have success this season.

Reports out of New England are not good especially in regard to their offense. Even with all the negativity, it is hard to see a scenario where Mac Jones doesn’t take a step forward in his development in his sophomore campaign. The former first round pick showed promise as a rookie, and there is reason to be excited for year two. Along with solid quarterback play, the Patriots did improve their outside pass catchers. DeVante Parker and, when healthy, second round pick Tyquan Thornton will help open up the middle of the field for Meyers. Even if the Pats offense is middling, Meyers will still far outperform his current price.

David Njoku became a valuable fantasy football asset when the Cleveland Browns decided to move on from Austin Hooper and give the former first round draft pick an extension. On May 27, 2022, the tight end received a four-year, $56.75 million deal to be their TE 1. This is a smart process play by the Browns. Njoku is a good athlete. He is in the 80th-percentile or better in 40-time, Speed Score, Agility Score, and Catch Radius. He best workout metric is his 132.1 Burst Score which is in the 97th-percentile. 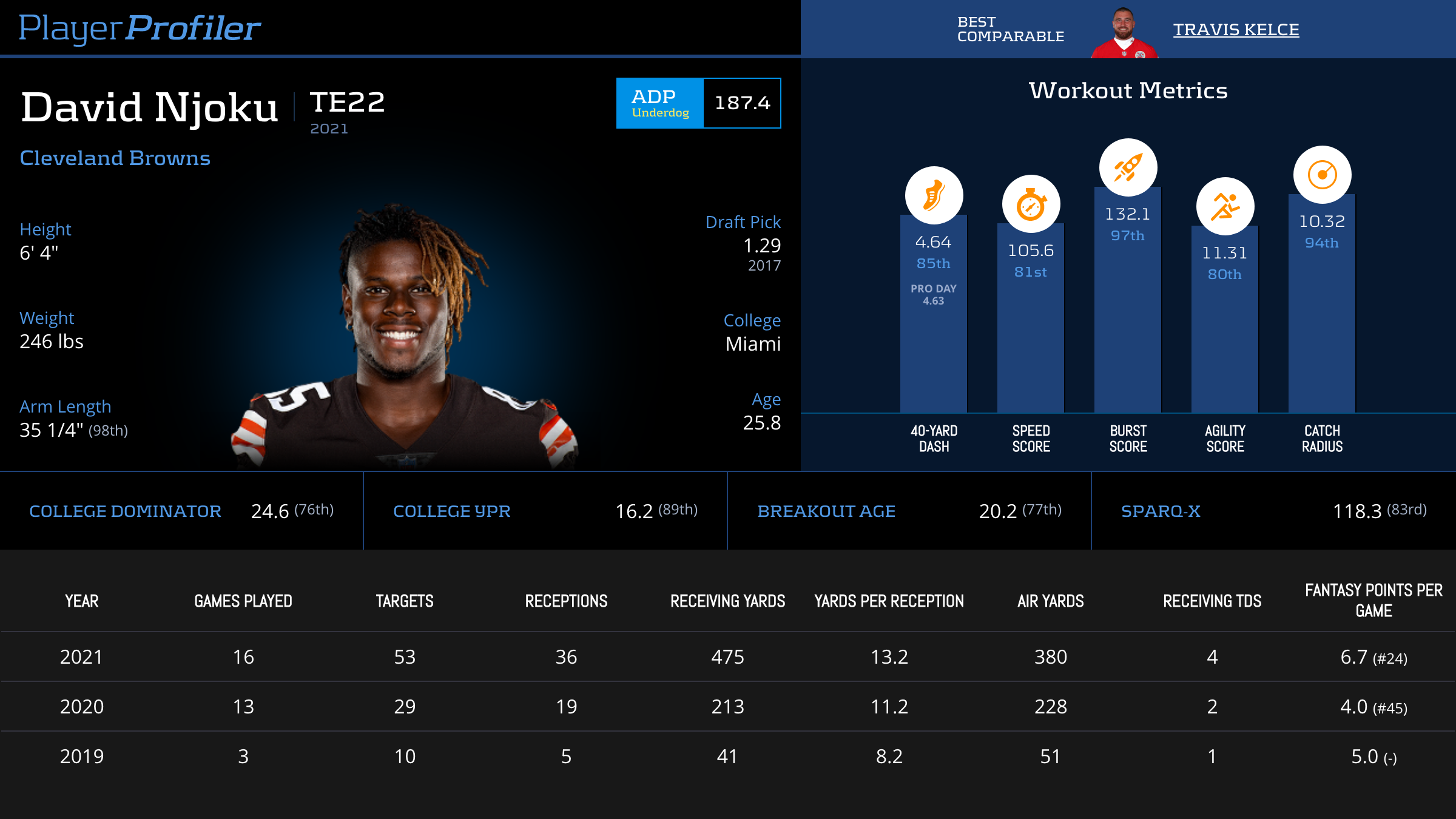 As the Browns second tight end option, Njoku failed to reach 500 receiving yards. However, there were positives in his analytical profile. He was a down field threat highlighted by his 13.2 Yards per Reception (No. 4 amongst qualified TE). Njoku also proved to be a reliable pass catching option. His quarterbacks had a 121.2 QB Rating whenever he was targeted (No. 7). Njoku scored 2.03 Fantasy Points per Target (No. 6). These are the types of metrics that gets fantasy managers excited when a player is about to see an increase in volume.

Once Deshaun Watson returns from his suspension, he will be the most talented quarterback Njoku has ever played with. But until that time comes, he will be working with Jacoby Brissett. Overall that is not a something worth investing in, but it isn’t as bad as it seems on the surface. Alfredo Brown (@ThePretendGM) tweeted a very interesting statistic. It said that Brissett targeted his former teammate Mike Gesicki eight times a contest. That was good for a 20-percent Target Share. Now that is something worst getting excited over. Fantasy team builders can take Njoku after pick 150, and he is poised to dismantle that average draft position. This is why he is one of the ADP smashers in 2022.

It’s essential to target these guys in seasonal leagues and trade for them in dynasty. No matter the league’s format, these players are worth rostering because there is reason to believe that they will destroy their current draft value. By end the of the fantasy football season, we will all look back on these guys and chuckle about where they were going in drafts. These guys will be the ADP smashers in 2022.