Running backs have to get as much money in free agency as quickly as possible because of NFL teams’ reluctance to pay the position after the failed signings of Le’Veon Bell, Todd Gurley, and David Johnson in past free agencies. Because of this, it was not surprising to see Aaron Jones sign on the first day of the legal tampering period. It was, however, surprising to see him sign for below-calculated market value and remain in Green Bay. Jones enters a critical age-27 season; what do dynasty owners need to do with him? How does the departure of Jamaal Williams affect Jones? What should we do with A.J. Dillon in dynasty leagues? 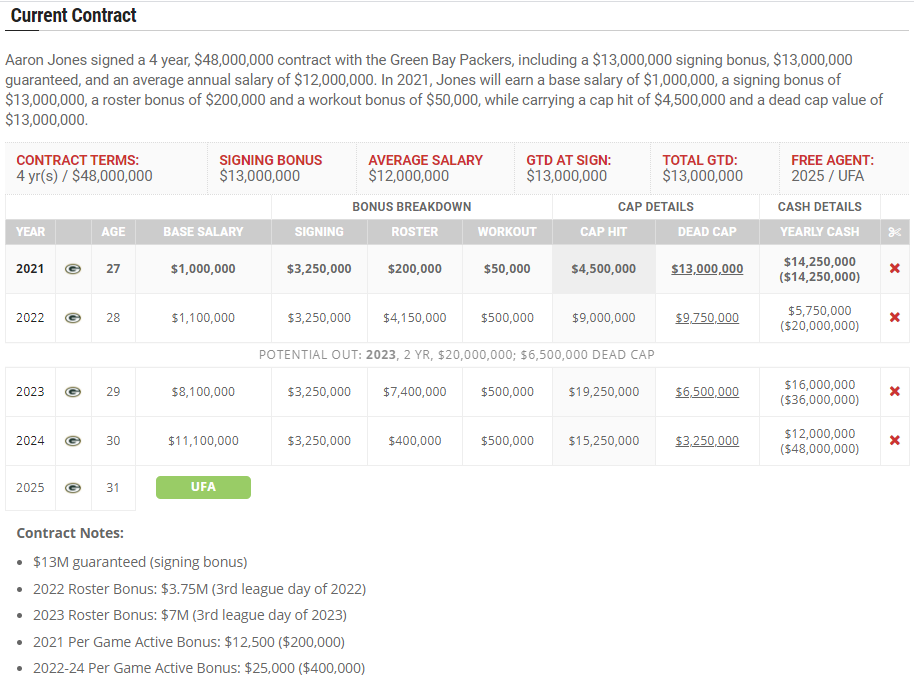 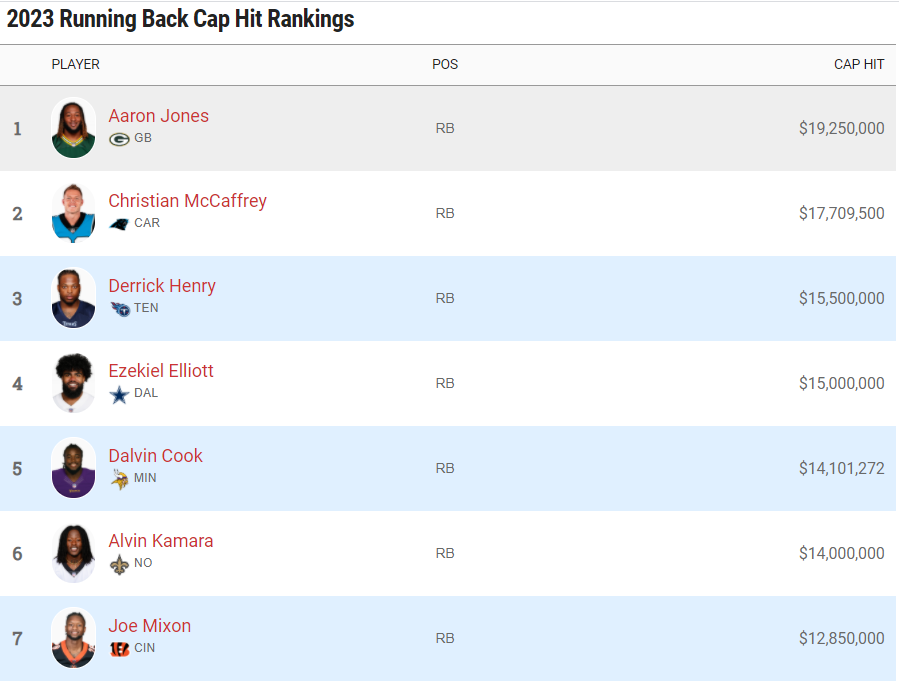 Looking at the cap hits of Jones’ contract, even if his performance doesn’t crater in 2021 and 2022, the Green Bay Packers will be hard-pressed to retain him after the 2022 season. His cap hit jumps from $9 million in 2022 to $19.25 million in 2023! To put in perspective how massive his 2023 cap hit is, Ezekiel Elliott‘s $13.7 million cap hit in 2021 is the highest among running backs and only two other running backs (Henry and Saquon Barkley) exceed a $10 million hit. In 2023, Jones’ cap hit will lead NFL running backs, with Christian McCaffrey second on the list with a $17.71 million hit.

Aaron Jones has had back-to-back seasons finishing in the top-10 among qualified running backs in Weighted Opportunities, allowing him to finish as RB4 and RB3 in Fantasy Points per Game in 2020 and 2019, respectively. Green Bay was one of two teams to have two running backs eclipse a 40.0-percent Route Participation rate. Jamaal Williams finished 2020 with respectable averages of 7.6 (No. 15) Yards per Reception and 1.22 (No. 23) Yards Per Route Run on a 7.8-percent (No. 32) Target Share.

A.J. Dillon only saw a 0.7-percent Target Share on his 30 (N0. 103) Routes Run last season. None of the 102 running backs that ran more routes than Dillon had a lower Target Share. The next lowest mark among those running backs belongs to Peyton Barber, who logged a 1.4-percent rate. Dillon and his 5.9-percent (33rd-percentile) College Target Share is incapable of replacing Williams’ role in the passing game. Jones’ 242 (No. 17) Routes Run are destined to increase and will offset any carries lost to Dillon in 2021.

Twitter is full of unoriginal gimmicks such as “I didn’t realize I was X amount of followers away from [insert nearest multiple of 100]”. The most recent one is “Rip Player X szn” after an NFL transaction occurs. The latter was all over the social media platform for A.J. Dillon after the Aaron Jones re-signing was announced. Let’s use the persuasion of the masses to our advantage. 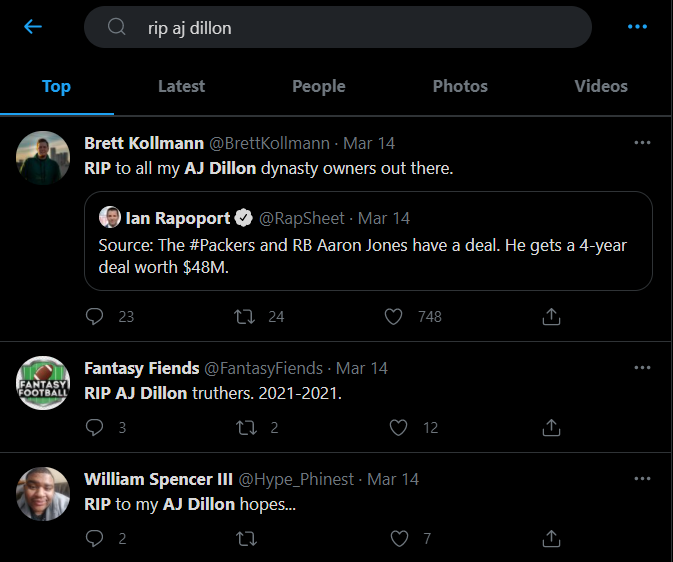 The sell-high window on Dillon did close when Jones resigned, but now the buy-low window on Dillon has opened. Jones, 27 years old in December, is unlikely to play out his contract which goes into his age-30 season, and would see his 2023 cap hit balloon up to $19.25 million. Find the panicked owners in leagues that are impatient and acquire Dillon at a bargain price. 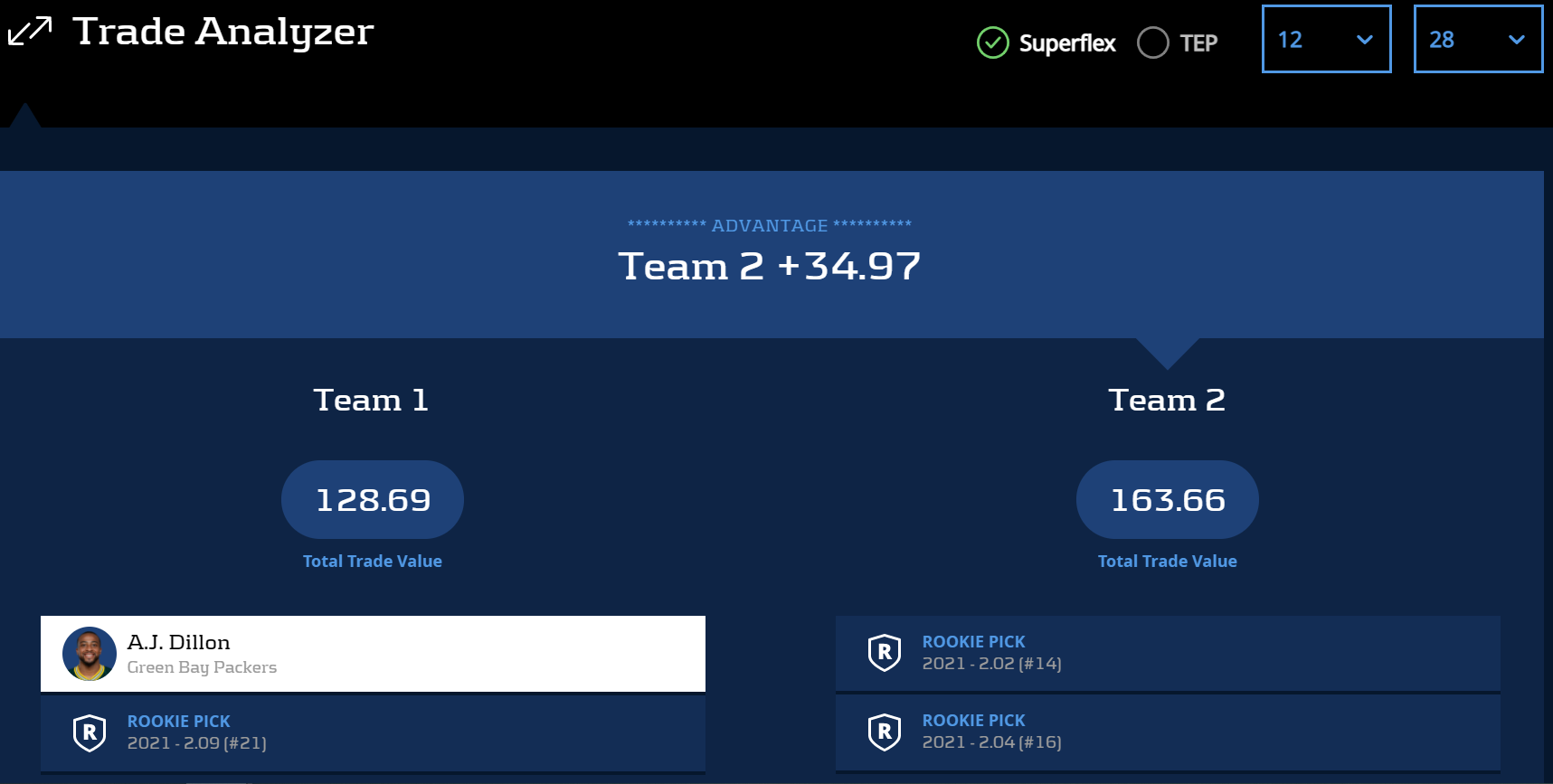 The trade above was made at the start of March before free agency, with a fantasy manager having gambled on Jones leaving town. Kudos to that manager for capitalizing on hype and uncertainty, flipping Dillon to increase his 2021 rookie draft pick capital. Assuming the two managers are subscribers to PlayerProfiler and have the latest rookie rankings, the former Dillon manager flipped him and Elijah Moore for Rondale Moore and Jermar Jefferson/Chuba Hubbard. That’s how you win at dynasty!

Right now, I would look to acquire Dillon for a late 2021 second-round pick. And in more casual leagues, he can be acquired for less. This is because the perception of Dillon as a backup running back is less exciting than the second-coming of Derrick Henry. Running back depth in 2021 rookie drafts dries up quickly after the trio of Najee Harris, Travis Etienne, and Javonte Williams are picked. The aforementioned Jefferson and Hubbard, along with Kenny Gainwell, are likely gone before the end of the second round of rookie drafts too. I’d rather have Dillon than likely RB options Michael Carter and Kylin Hill with my late second-round rookie pick. 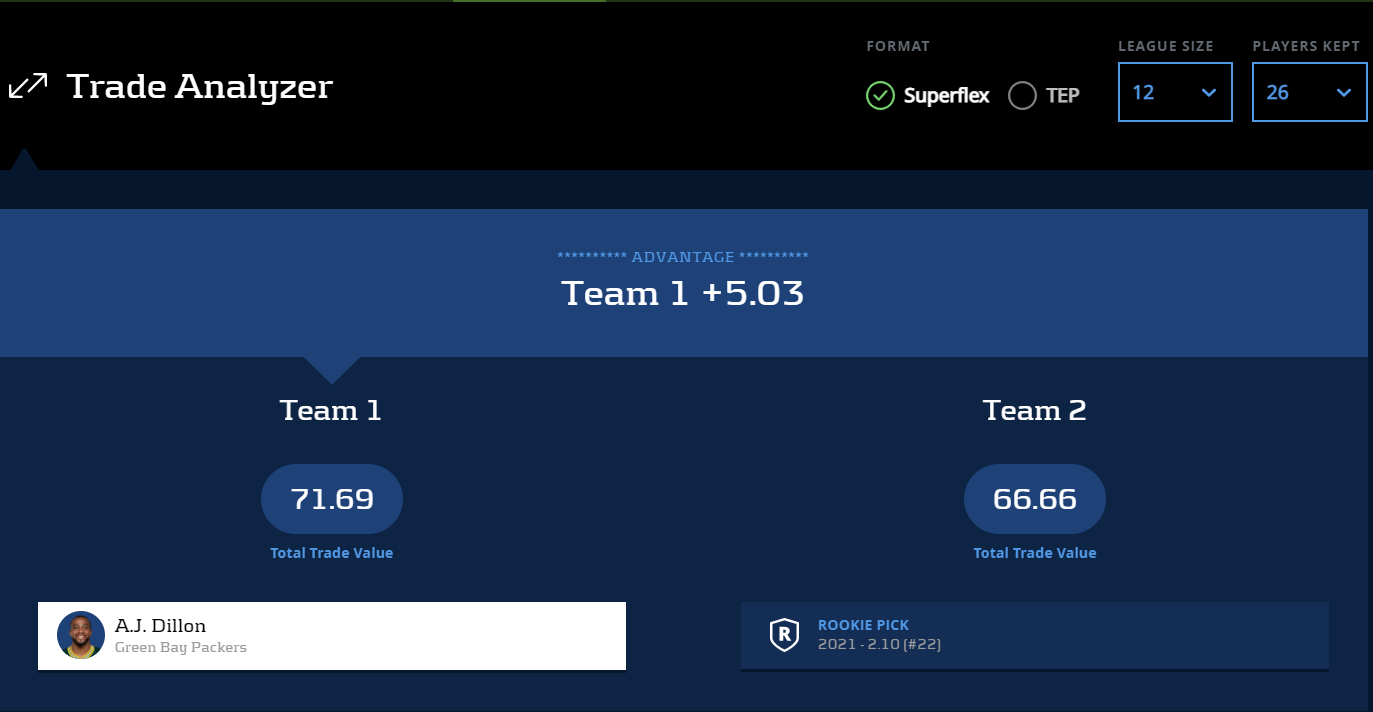 Jones resigning is also the start of your window to trade him away! As mentioned, he’ll turn 27 years old this season, and running backs age like spoiled milk and not fine wine. Jones is at his peak and has nowhere to go but down dynasty rankings, as he exits his prime. Don’t make the same mistake many others had with Todd Gurley and Le’Veon Bell. Like Jones, Gurley (2017-18) and Bell (2016-17) had back-to-back top-four PPR running back finishes. Their following finishes? For Bell, he sat out a whole season and then finished as RB16 and RB62 in 2019-20. Gurley finished as RB15 and RB29 in 2019-20. Both running backs saw their Lifetime Value evaporate to the point where managers will be lucky to receive anything for them. 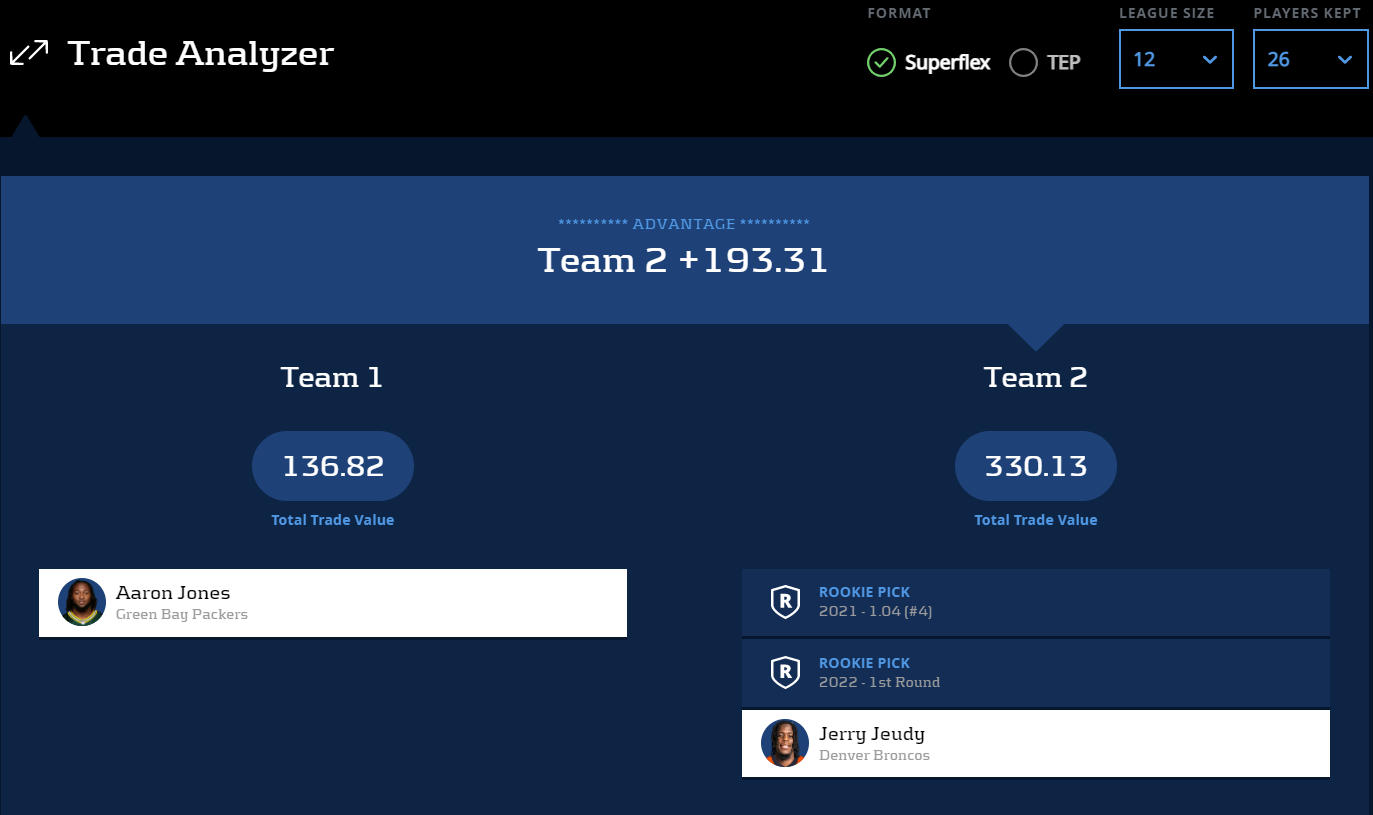 What should managers try to acquire in return for Jones? Running backs that produce at an elite level are the most valuable commodities in all dynasty leagues. Find the team looking to go all in to win. I would try to acquire a top-5 2021 rookie pick, a future first-round pick, and a second-year wide receiver that didn’t break out in his rookie season that should see a quarterback upgrade, such as Laviska Shenault or Jerry Jeudy. The top-5 SuperFlex rookie pick guarantees you one of the top-3 running backs, Ja’Marr Chase, or one of the top-2 quarterbacks in Trevor Lawrence or Justin Fields.