This article is part of a series evaluating 2022 rookie running backs solely on their ability to run the ball. The first installments can be found here. If you’ve already caught these and don’t need a refresher on my methodology, feel free to skip to the player-focused analysis.

Outside the ability of whoever happens to be running the ball, there is a whole mess of variables that factor into the effectiveness of a given rushing attack. There’s scheme, play-calling tendencies, opponent strength and scheme, weather, offensive line play, surrounding skill-position talent, etc. Given this entanglement, separating the ball carrier’s contributions from the offensive environment in which he operates isn’t a straightforward task. My approach to doing that is centered around measuring the degree to which a running back is over- or under-performing the per-carry output of the other running backs on his team.

Starting from the premise that good runners do more with what they are given than do bad runners, it stands to reason that, provided players are operating under generally the same conditions (like, for example, playing on the same team), better backs should produce more per carry than lesser backs. Using this logic, we can establish a baseline for comparing efficiency between players on the same team. For each back, we can compare his performance (X) to the collective performance of all the other team’s RBs (Y). If X > Y (essentially, if dude is doing more with his carries than his teammates are with theirs), we can probably conclude that the player in question is a good player. At least to some relative degree.

Assuming that this is a sound method of evaluating running backs relative to their teammates, we can then extend our comparisons to players from other teams (we’re really just creating a baseline for efficiency comparisons similar to how Dominator Rating and other market share-based metrics create baselines for volume-based comparisons).

The key metrics I use to evaluate running back performance vs. that of their teammates are called Yards Per Carry+, Chunk Rate+, and the recently-developed Box-Adjusted Efficiency Rating, or BAE. I also like to use a metric called Breakaway Conversion Rate. But that’s not a teammate-relative measure, and we’ll therefore look into it separately.

BAE also does those things, but it improves upon Yards Per Carry+ by using a weighted average of a player’s per carry efficiency on carries vs. various amounts of defenders in the box (using data from Sports Info Solutions), relative to the per carry efficiency of other running backs on his team vs. the same box counts. The resulting percentage indicates to what degree a runner over- or under-performed his teammates on his total rushing attempts, relative to how often he faced each box count. BAE is a more comprehensive metric than is YPC+, and I will defer to it accordingly. But YPC+ and Chunk Rate+ will still be used given that the sample of data I have for those metrics goes back a decade-plus (while I’m only able to generate BAE Ratings going back to 2018).

Mississippi Rebel Jerrion Ealy is a fun eval. Dude came into college as a 5-star recruit in football AND one of the top baseball prospects in the country. He spent three years catching a lot of passes (his per game reception numbers are in the 83rd-percentile among running backs drafted since 2007) and breaking a lot of tackles (per PFF, his 0.32 Missed Tackles Forced per rushing attempt are a David Montgomery-esque defender-shedding performance). While his production profile is underwhelming, his play-to-play ability is evident in his per touch efficiency metrics.

On a per carry basis, Ealy outperformed a middle-of-the-road running back group at Ole Miss (their 3.23 stars as high school recruits is a 50th-percentile average) to the tune of 0.94 YPC+, a 67th-percentile mark. His rate of 10-yard runs was similarly impressive relative to his teammates. He outdid them by 3.06-percent in Chunk Rate.

Accounting for the amount of defenders in the box that Ealy faced on his rushes paints a slightly different picture. He still was more efficient than other Rebel runners on average. But his BAE Rating of 113.3-percent is just a 36th-percentile mark. He was less efficient than his backfield mates against heavy boxes, offering just 53.9-percent of their per carry output against 8 men in the box, and a putrid 11.6-percent of their per carry output against 9 man boxes. Those heavy-box touches represent a very small portion of his career carry total. And he actually saw 0.29 fewer defenders in the box on his carries than his teammates did on theirs. Only Tyler Badie ran against lighter boxes relative to his teammates among backs in this year’s class.

Such relatively low box counts should cast skepticism on Ealy’s positive team-relative efficiency numbers. He earned more yards per carry and turned more of his carries into chunk gains than his teammates did. But he did so in one of the cushiest ball-carrying roles of any back in the last few draft classes. It would be a harsh indictment of his ability if he had seen the light boxes he saw and not exceeded the efficiency of the other running backs on his team (as Isaiah Spiller managed to do). And it’s not particularly encouraging that he only outdid them to the degree that he did. According to a composite efficiency score based on BAE that I’m currently workshopping, Ealy scores a 41.3 out of 100. This ranks No. 15 out of the 22 2022 running backs I’ve collected data on so far.

In the composite Rushing Efficiency Score that I use now (which accounts for all the non-BAE metrics I’ve addressed in this article, in addition to overall team quality, rushing volume, strength of opponent, and offensive line play), Ealy earns a 59.2. Good for a rank of No. 8 among the same group of 2022 running back prospects. This score also accounts for the 29.1-percent Breakaway Conversion Rate that he posted over his career; a 44th-percentile mark that is, as the kids say, mid. 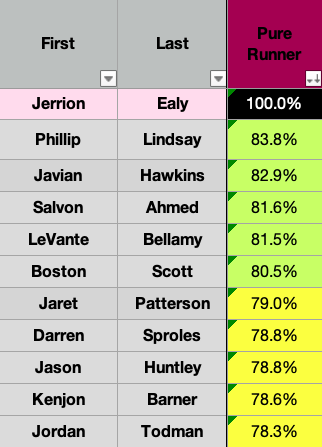 Assuming he runs a 4.45 at 5-9 and 185-pounds, the above are his closest comparable “pure runners.” This category accounts for physical measurables in addition to the metrics that make up the Rushing Efficiency composite:

Jerrion Ealy is a far better receiver coming out of college than most of these guys were as prospects. He should have an easier time finding an NFL role than someone like Jaret Patterson. However, if the best player on your comps list is Darren Sproles, you probably won’t be fantasy-relevant. That’s absolutely no shade to Sproles, who was awesome for a long time in the role that he played. But the sub-5-10, sub-200 pound RB archetype is not one with many success stories.

Ealy simply must be bigger come the Combine. With a prospect profile that doesn’t even stand out within his archetype, he’s not the droid you’re looking for.